The ‘Bond Vigilantes’ and the Debt Ceiling Crisis: No Need to Panic or Lying in Wait?

Harvard’s eminent trade economist, Robert Lawrence, gave a talk in Greece this month. Among his slides was this image with the headline: “The Vigilantes are Asleep!” 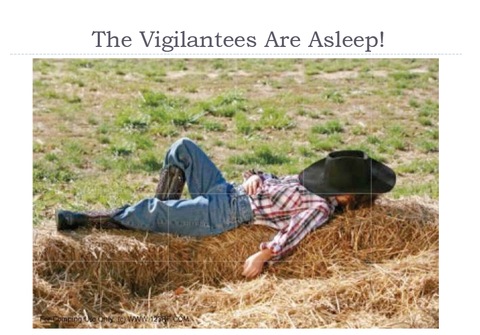 That would be the so-called “bond vigilantes” – the investors in the world’s bounteous supply of IOUs, with specific reference to the IOUs of the United States – our Treasuries (bonds, notes and bills).

The fear, of course, has been that the vigilantes will wreak their revenge on decades of American profligacy by suddenly demanding frontier justice – in the form of a much higher interest rate for their desperately needed money. That added interest burden will drag us further down the debt hole, thus provoking the vigilantes to demand even more justice via higher rates, etc., etc., and eventually we’ll go down the drain a la Greece, or the erstwhile Brothers Lehman.

As everyone knows, this grim spiral will be triggered by America’s failure to lift the debt ceiling, thus sending us into “default,” thus spurring the vigilantes into action.

But if the vigilantes haven’t been paying the slightest attention to our famously towering debt problem, headline warnings of which date back at least to the 1980s, or to the debt ceiling crisis of recent months, surely they would have already sprung into the saddle long ago, right? Denizens of the Wild West, they would know that investors move like cattle – in herds – and that stampedes are only a hoofbeat away. In this case, a stampede of bond investors who invest in Treasuries because of their safety, all primed to unload their positions before the other cow once the safety is called into question.

So what’s happening to the U.S. Treasury yield – that is, the interest rate the government pays to borrow? It must be spiraling out of control, right? Since April, when the Standard & Poor’s rating agency threatened to downgrade U.S. debt, the United States has been on Greeced skids to Palookaville, paying interest rates last seen when Louie the Lug asked his bookie for some slack to play the ponies at Pimlico?

In fact, here’s the picture, since the S&P announcement, of the interest rate the U.S. has been paying to borrow money for 10 years: the yield on the 10-year bond.

In other words, investors have been demanding a lower interest rate to lend money to Washington ever since the debt ceiling became a “crisis.”

Robert Lawrence’s slide suggests one possible explanation: the bond vigilantes have simply dozed off after a hard day back home on the range.

The other possibility: That from the point of view of the financial markets, the debt ceiling showdown is a gunfight at the I’m-okay-you’re-okay corral.

Meanwhile, in the few hours since I began writing this post, the yield has dropped to 2.96 percent!

What these numbers indicate about the interest rate the U.S. has to pay: other factors outweigh the cumulative debt total — such as the economy’s prospective vigor, or lack of it, for example.

All I can tell you is what I’m doing with the bulk of my retirement savings: keeping it in TIPS – Treasury Inflation-Protected Securities, guaranteed by the full faith and credit of the paralyzed United States of America. As I pointed out yesterday, even if the debt ceiling isn’t raised, we can cover interest payments on our debt from government revenues – can cover it many times over. So I figure the hits, should they come, will be to those who sell to the government (as was the case when California ran out of money), those who work for the government, and those who receive benefits from the government. And it’s hard to imagine that the people who represent America’s vendors, employees and beneficiaries are going to deprive them of their legal claims for very long.

This entry is cross-posted on the Rundown- NewsHour’s blog of news and insight _Follow Paul on Twitter._