The Economic Benefits of Gay Marriage

An economist looks beneath the same-sex marriage debate to the costs incurred by couples who can’t marry, by regions that won’t let them, and by the economy as a whole. 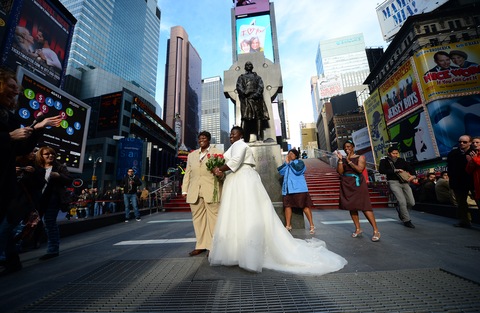 A Note from Paul Solman: I usually answer reader questions here on Friday. But given the visibility of the same-sex marriage debate this week, I asked one of America’s foremost researchers on the economics of the subject to answer a question of mine: What’s the bottom line on same-sex marriage? Lee Badgett was quick to respond.

M.V. Lee Badgett: This week, all eyes were on the Supreme Court as it grappled with same-sex marriage in California and its non-recognition by the federal government. Heartwarming stories of the plaintiffs in these cases show the emotional and cultural side of what’s at stake for same-sex couples. Those of us of a more practical nature, however, might want to know what the economic implications are.

The first point worth noting is that marriage can make a big difference for same-sex couples’ financial well-being. A few years ago, two New York Times reporters calculated that even ordinary same-sex couples could lose as much as $500,000 over a lifetime because they can’t marry and therefore can’t get employers’ spousal health insurance, among other disadvantages. As a result, people in same-sex couples are much more likely to be uninsured than are people in different-sex couples. And if the uninsured avoid preventive care or get care they can’t pay for, they wind up costing us all. Marriage also helps couples make economic decisions that create both private and social benefits, like investing for retirement, and looking after each other’s health.

On the other hand, the fact that governments and employers use marriage to dole out benefits makes some wonder if same-sex marriage equality would come with a price tag for state and federal budgets. For example, Edie Windsor sued the U.S. government because she had to pay $363,000 in federal estate taxes when her wife died, all because their marriage didn’t count under federal law. Recognizing her marriage would have meant less money for the government in federal estate tax revenue.

However, more than a decade of research by myself and other economists and analysis by the Congressional Budget Office under the direction of Douglas Holtz-Eakin suggests just the opposite: that state and federal budgets will actually get a positive boost if gay couples are allowed to marry. Any additional state and federal spending on benefits would be outweighed by savings from lower cash assistance and Medicaid spending. Moreover, many same-sex couples would also discover – unhappily, one imagines – the marriage penalty in the federal income tax system, resulting in a likely increase in tax revenue.

And here’s something the government might consider in reckoning the bottom line with regard to legalizing gay marriage: Hundreds of thousands of excited couples would start planning weddings, generating at least $1.5 billion, by my calculations, in spending on flowers, cakes, bands, meals, photographers, hotels, tourism in general, suits and gowns (not to mention those one-off gowns for the members of the bridal party). And of course all those purchases generate millions in sales tax revenue for state and local governments.

Those fairly obvious fiscal benefits just scratch the surface of what our economy might have to gain. Big corporations want same-sex couples to be allowed to marry because they believe gay marriage is good for business. Hundreds of employers large and small, including Google, Apple, Verizon, Walt Disney, Viacom, Nike, Morgan Stanley, and Microsoft, signed onto two friend-of-the-court briefs related to this week’s Supreme Court arguments over challenges to the Defense of Marriage Act and California’s Proposition 8. Those employers argued that they want to recruit and retain the most creative and productive workers to make their businesses competitive, and that includes lesbian, gay, bisexual, and transgender (LGBT) workers. They want their LGBT employees to be able to focus on their jobs, not on dealing with the stigma and inequality that creates problems for their families.

But businesses can only treat their LGBT employees equally if the law lets them — and these briefs argue that it does not. A gay man who lives in Massachusetts with his husband might not want to transfer to an office in Ohio where his marriage isn’t recognized. The Defense of Marriage Act creates administrative nightmares for businesses who must, for example, withhold taxes on the value of a same-sex spouse’s health benefits but not those for different-sex spouses. The companies filing these briefs argue that these are burdens on business competitiveness.

The economic ripple effects of gay marriage can spread even further. Some observers, most notably competitiveness guru Richard Florida, argue that tolerant policies and environments — including for gay people — are essential for nurturing creative workers who will drive economic growth. By that reasoning, businesses, cities, states — and maybe even nations — that allow same-sex couples to marry will also send a strong signal to every worker that his or her talent and creativity will be valued.

Admittedly, the same-sex couples challenging California’s Proposition 8 and the federal Defense of Marriage Act are probably not thinking about how far their efforts will reach into our economy. However, their short walks down the aisle some day — whether as a result of a Supreme Court decision or the changing tide of public opinion — may well strengthen the very foundations of our economy.

M. V. Lee Badgett is director of the Center for Public Policy and Administration at the University of Massachusetts Amherst, and is research director of the Williams Institute at UCLA School of Law. She was an expert witness in the Proposition 8 trial and is the author of “When Gay People Get Married: What Happens When Societies Legalize Same-sex Marriage?”