The Economics of a World Run Riot

The world has seen four great waves of inflation and stability since 1200, according to Fischer. Each began with the price revolutions of Medieval Europe, of the 16th Century, the 18th Century, and now this one, starting around 1900. Each was followed by crisis and only eventually, a return to a long period of price stability.

Yardeni paraphrases Fischer: “Periods of price stability and prosperity boost population growth and standards of living. These developments inevitably lead to higher inflation,” as more people demand more stuff. The world’s energy and food producers — those who produce the calories that fuel us — just can’t keep up.

(*For those who took some version of Econ 101 and loved it so much they’re nostalgic for a review of “elasticity,” or those who never understood economics and wished they had, or the rest of you who simply avoided the course but long for a quick peak at what you missed, a slightly more formal explanation is tacked on to the end of this post.)

The point is: prosperity encourages population growth which in turn drives increased demand for food and fuel. At some point, the demand outstrips the economy’s ability to meet it. Prices rise dramatically, especially if there’s environmental pressure like a bad harvest or the Black Plague, in which case all hell can break loose: the hell of the 14th century, for example. And we do mean hell.

Here’s just one excerpt from Fischer:

Torrential rains came again in 1316. The grain crop failed a third year in a row. Europe began to experience the worst famine in its history. When other sources of food ran out, people began to eat one another. Peasant families consumed the bodies of the dead. Corpses were dug up from their burying grounds and eaten. In jails the convicts ceased to be fed; we are told that starving inmates “ferociously attacked new prisoners and devoured them half alive.” Condemned criminals were cut down from the gallows, butchered and eaten. Parents killed their children for food, and children murdered their parents.

The resulting malnutrition also made the population vulnerable to the bubonic plague and helped create, according to the argument, the political instability popularized by Barbara Tuchman years ago in her bestseller, “A Distant Mirror: The Calamitous 14th Century,” featuring the Hundred Years War between England and France, the papal schism and numerous uprisings across the continent.

Fischer finds the same prosperity/inflation/catastrophe pattern in Europe just before the bloodfest known as The Thirty Years War and again before the French Revolution, which starts with bread riots, remember, at least in “A Tale of Two Cities.” Finally, Fischer situates himself (the book came out in 1996) at the end of the fourth great “Price Revolution” that began around 1900.

But, says Yardeni, that was early in the prosperity surge of what we used to call the Third World. What Yardeni has elsewhere called the “greatest global boom of all time” may be ushering in a fifth PR. Or as Yardeni puts it:

Fischer’s thesis actually may be very relevant today as more people in emerging economies are demanding to achieve standards of living better than subsistence levels. The fifth Price Revolution (PR) may be underway, once again led by higher food and fuel prices. The previous four were associated with a great deal of economic, political, and social upheaval. The relevance of the history of previous inflation waves to the present situation is downright eerie.

For those who can’t get the famine of 1316 out of their heads, rest somewhat assured: the world is a much richer place today, even with all those extra billions of us inhabiting it. But note: the North African riots are co-terminus, if not significantly prompted by, a stunning rise in the price of food and fuel. Even in India, agricultural prices for lentils, rice and vegetables have risen more than 11 percent since last February, triggering demonstrations by tens of thousands.

The prosperity of the past century has allowed people everywhere to eat better, want more, expect more: Tunisians, Indians, Chinese, Greeks, you, me and municipal workers and taxpayers from California to New Jersey. But no one is happy to pay more, especially if they can’t afford it.

The Great Wave theory can’t possibly explain all the anger and angst. But it’s a timely reminder that we’re subject to larger economic forces. Malthus has been proven wrong in the long run, at least so far. But in the long run, of course, we’re all dead.

*When there’s a surge in population, the demand curve for necessities shifts out. Unfortunately, the supply curves for food and fuel are pretty much fixed in the short term: “inelastic,” ie, unresponsive to price changes. The result: a steep rise in food and fuel prices. Now on the web is a video we made a few years ago explaining and depicting this phenomenon with regard to natural gas. 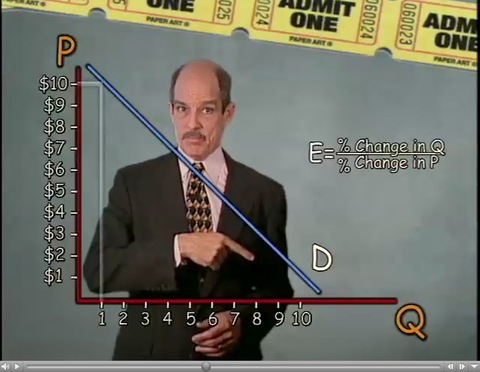