The Effects of Oil Production Turmoil: What We Pay For At The Pump

Ever wonder why a gallon of gas will cost $3.21 today, $3.12 yesterday and maybe $3.79 next week? The price of the gas at the pump fluctuates mainly with the price of crude oil, plus a time lag. The price of crude itself bounces around due to all sorts of influences, exaggerated if not caused by the huge amount of speculation in the oil market.

Crude is not the only factor in price, however. The Department of Energy’s price breakdown as of February 2011: 65 percent crude oil, 14 percent refining costs, eight percent distribution and marketing, and finally 13 percent federal and state taxes. So, at first glance, fully a third of the price would seem to depend on factors other than the cost of crude, factors whose price shouldn’t vary much from week to week, even year to year. But a closer look suggests that the impact of supply disruptions, such as we’re now seeing in North Africa, can actually far exceed 65 percent of the price, because they affect refinement and distribution as well.

So, what are the effects of production turmoil? (Turm-oil; Short-term oil? There’s a joke in here somewhere waiting to made.) 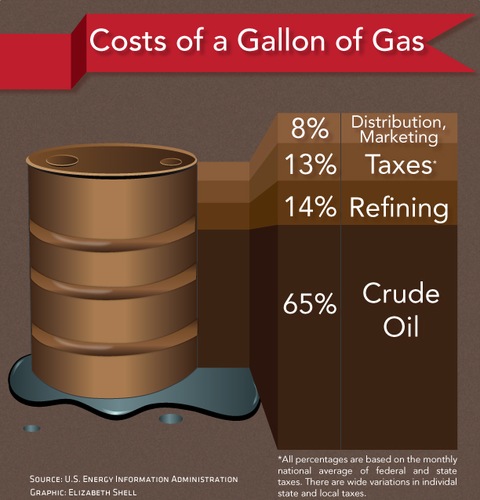 Click here to view a larger version of this image.

First, the price of a barrel of crude — 42 gallons-worth of oil — depends largely on international markets, reacting to demand (higher in summer), supply, and speculation based on both. The crisis in North Africa, including Operation Odyssey Dawn in Libya has obviously constrained supply. Wells have been hit in Libya. Companies have shut down operations to safeguard against attack, pipelines being especially inviting targets.

But the price of crude also depends on speculators. There’s a controversy over the extent to which this is true, which I’ve written about at some length when oil last peaked. For this post, suffice it to say that if investors think the price will rise and back their prediction with bets in the futures market, driving up the future price, that in turn affects the decision of oil producers today: to pump or not to pump. (This from an old college friend who is one of those producers.) And thus can speculation affect supply.

Meanwhile, the price of crude has risen back up to above $105 a barrel at the moment- a 24 percent price jump since the beginning of protests in the Middle East and North Africa began in mid-January. Prices at the pump reflect this spike, reaching their highest levels ever for this time of the year. Since December 2010, before fears about the crisis hit the market, prices have jumped almost 20 cents per gallon. The rule of thumb: a 2 1/2 cent rise at the pump for ever extra dollar per barrel. (Roughly, $1/bbl divided by 42, the number of gallons/bbl.)

The cost of refining oil makes up 14 percent of the price of gasoline. When a barrel of oil is refined, the 42 gallons are distilled down to about 20 gallons of gasoline. But different types of oil require different kinds of refining.

The importance of Libya is that it produces the easiest type of oil to refine, fittingly called “sweet crude.” Sweet crude oil is so called because of its extremely low sulfur content, which suits it for manufacturing gasoline, and especially for diesel, as removing sulfur is costly. Oil with high sulfur content is called “sour.” Unfortunately, the world is more sour than sweet. A further cost factor: Refineries in the United States have the capacity to process sour oil, but many in Europe and Asia do not. And Europe uses far more diesel than we do in America.

When the price of sweet spurts, there’s more demand for sour. That in turn raises sour’s price.

The supposed price savior is Saudi Arabia, which publicly promised to produce more oil if the situation in Libya continues to deteriorate. The catch? Most of Saudi Arabia’s spare oil is sour, so most of the refineries on which European and Asian countries rely are ill-equipped to process it and soften the price blow. Thus the more turmoil in Libya, the higher the price of refining oil.

Although distribution, marketing and retail costs make up the smallest percentage of gas prices (eight percent), distribution is one of the biggest concerns for oil companies right now. If the crisis spreads to the Middle East (and it’s already in Bahrain and Yemen), it threatens to affect key oil transit points for tankers to and from refineries. Of particular concern is the Strait of Hormuz, a narrow waterway through which about 40 percent of the world’s oil traffic passes.

Though there have been protests nearby and at the Suez Canal, there are currently no signs of them closing down. As with so much of the oil story, the worry with distribution comes from fear of the future, rather than the current reality on the ground. And again, that prompts speculators to buy for future delivery, for producers to hold off production until prices rise…a self-fulfilling prophecy of upward-spiraling prices. As the danger rises, so does the price.

Taxes on gasoline are the second-largest contributor to prices. On each gallon of gas, the federal excise tax, also called the fuel tax, is currently 18.4 cents. State and local taxes account for regional variation. As of the beginning of last year, they averaged about 22 cents per gallon, with a high of 47.7 cents per gallon in California as of January 1. Eleven states also levy sales taxes on top of federal and state gas taxes. And county and town taxes can drive costs up further.

There has long been talk of raising the federal gasoline tax, flat at 18.4 cents since 1993. (18.4 cents in 1993, simply adjusted for inflation, would be about 28 cents today.) Not much such talk at the moment, but the Canadian province of New Brunswick did raise its gas tax on Tuesday.

Finally, for those who think U.S. gas taxes are high already, here are the comparable figures from England: gasoline taxes of about four dollars a gallon, up from something like $2.50 a gallon in the early ’90s.