The Fed’s Terminal Dilemma: When to Begin ‘the Great Unwind’

Paul Solman: The most financially savvy country and western crooner in America, Merle Hazard, returns to the Making Sen$e Business Desk with the release of a new economics chart-topper: “The Great Unwind,” produced by Nashville Public Television (WNPT-TV).

Merle’s real-life alter ego, money manager Jon Shayne, prefaces the video with a bit of background. We’ll follow in our next posts with reactions to the song and subject from economists Ken Rogoff, Jamie Galbraith, Arthur Laffer, Simon Johnson, Greg Mankiw, John Taylor and Justin Wolfers. And *[Jon/Merle]( http://www.jonshayne.com/ )* will get a chance to respond at week’s end.

Jon Shayne: Paul asked me to comment on what the heck inspired my musical alter-ego, Merle Hazard, to put together the music and video for “The Great Unwind.”

Well, my muse was Warren Buffett, also known as the Wizard of Omaha, who runs Berkshire Hathaway Inc. Specifically, what got me was an interview Buffett gave on CNBC in March. The topic was central bank policy, which, to a money manager, is nearly as interesting as pickup trucks, whiskey and boot scootin’ boogies. The part of the interview that I like starts at 45 seconds and continues until just after the 3-minute mark:

Warren Buffett considers the unwinding of the Fed’s stimulus policy in this March CNBC interview.

Buffett says in the clip that he thinks it will be “interesting” when the Federal Reserve gets to the unwinding stage of the stimulus it has applied. Prompted by the interviewer, he admits that “interesting” is just a euphemism.

“It’s very easy to buy,” Buffett says, referring to the trillions of dollars worth of bonds that the Fed has purchased to support the economy since the 2008 crisis.

“Now when you start selling, you know, you, at that point, you start sopping up reserves,” he adds. “And that’s a much different action than buying.” (The reserves are the trillions of dollars that the Fed has printed, or rather, created de novo, to buy bonds since the crisis.)

“All over the world, everybody that manages money is waiting to catch the signal that the Fed will reverse course,” Buffett says. “In the end, there are an awful lot of people (wanting) to get out of a lot of assets if they think the Fed is going to tighten a lot… (W)e’ve never had the degree of disgorgement that might be called for down the line, and who knows how it’ll play out. But it’ll be noticeable…”

Well, that may seem a little dry, but I loved it enough to write the song.

To put some meat on the bones of what Buffett is saying, take a look at this chart from the Cleveland branch of the Fed: 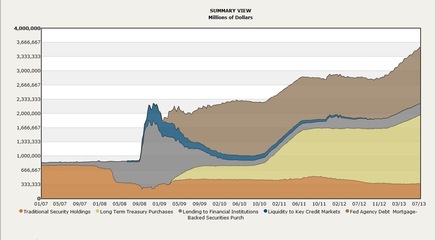 Click to enlarge this graphic by Certification Map.
Assets held by the Fed have soared to $3.4 trillion today. Graph courtesy of the Cleveland Fed.

The chart reflects that early in 2007, before the crisis, the Fed held $860 billion in assets. You can see, as you follow it to the right, that the Fed’s portfolio has grown to over $3.4 trillion today. In other words, the Fed has quadrupled in size. This is why my alter ego, Merle Hazard, croons that the Fed has been “buyin’ assets, by the trillion.”

What will happen if, in order to forestall inflationary pressures, the Fed needs to reverse course and, over a short period of time, sell a meaningful part of the trillions in bonds it has bought? As Buffett intimates, it would be ugly: interest rates would spike, and this could pull the stock market down sharply. We had a hint of that kind of market decline already. In June, the Fed suggested that it would start to taper off new bond purchases within several months, which means buying less, not actually selling, and this led to a temporary dip in stock prices and a rise in interest rates.

Because the effect on markets would be so negative, it is a pretty safe bet that the bonds will stay where they are, i.e., on the Fed’s balance sheet, as long as inflation stays low.

But will inflation always stay low? Maybe not. And the necessity of choosing between the risk of inflation, on the one hand, or knocking down markets, on the other other, is the dilemma that my music video is all about. As Merle puts it in the song:

*Our Fed’s the central bank to a deeply troubled nation.
If they sell off bonds, the markets tank. If not, some day, inflation.
Now the money has been flyin’, but has the Fed been flyin’ blind?
That’s why I’m worryin’ about…The Great Unwind.*

There is one other option that the Fed has. Merle sings about that in the second verse:

*Some say the Fed can manage this without sellin’ off its bonds;
That they’ll pay high interest on reserves, and bankers will respond.
But payin’ bankers not to lend ain’t how the system was designed,
So I’m still worryin’ about…The Great Unwind.*

In other words, instead of selling bonds off to suck dollars back into the Fed, the Fed can simply pay banks to deposit money at the Fed that would otherwise be used for lending. It started using that technique in October 2008. Currently banks have $2.1 trillion deposited there, up from about zero before the crisis, and they are making 0.25 percent annually on it. That does not sound like a high rate of interest, but my clients and I are making only about a fifth of that on our U.S. Treasury bills. So the bonus rate that the Fed pays to banks raises a fairness issue.

I worry about the politics of paying bankers not to lend and the Fed’s lack of experience with this technique. Paul Solman, the proprietor of this page, has been concerned, too. As the song says, it “ain’t how the system was designed,” at least not until 2008. Granted, we have, at least in the past, paid farmers not to grow certain crops. But bankers are not quite as popular as farmers.

Paying banks interest on their reserves is also mildly inflationary in the long run, at least in the very long run, once rates move up from the floor. This is because the interest the Fed pays on bank reserves is new money.

One last point: you may be thinking that it is a bit odd for a value investor to dress up in a costume and sing. Value investors are known to be not simply boring, but proudly and intentionally boring. So I guess it is a little unusual. But I’m not the only one who sings. Just check out this GEICO commercial, in which my muse for this project, the Wizard of Omaha himself, makes an appearance, well-costumed and excessively auto-tuned, as Axl Rose in the last 45 seconds of the video:

Watch Merle’s muse, Warren Buffett, do some crooning of his own in this GEICO commercial. (Look for Buffett’s appearance around 1:40 in the video.)

Jon Shayne is a money manager in Nashville who, once in a while, records country songs about the economy. Under his nom-de-guitar, Merle Hazard, he has tackled economic questions in songs such as “How Long (Will Interest Rates Stay Low)?” “Dual Mandate” and “The Great Unwind.”