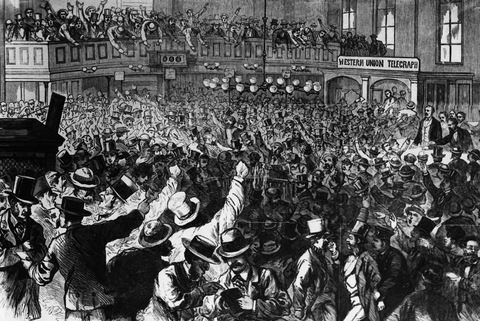 Paul Solman: “Ask Larry” Kotlikoff is best known on this page as the Social Security guru who answers your questions every Monday, as he did this morning. In the real world, though, he’s a sometimes quirky and widely esteemed centrist economist whose most popular work has warned of “the coming generational storm” and the notion that, because of unaffordable benefits we’ve promised to our seniors, America is as broke in theory as it soon will be in practice.

Larry sent me the piece below on Friday and asked if I would like to publish it. I hereby do with the warning “caveat lector.” I spell out the caveat in a postscript to the essay.

A Commentary by Larry Kotlikoff

You’re an employer. Every day you hear “the economy’s going over a fiscal cliff. Tax hikes and spending cuts totaling $600 billion will kill the economy.” Everyone’s saying it — the politicians, the media, the economists, the Fed, the CBO, the IMF. It must be true.

Sure, the Republicans and Democrats may make a deal and save the day. But these guys never agree. Meanwhile, economic doomsday, Jan. 1, is just weeks away.

What do you do? Do you wait for your customers to disappear, as they surely must, or do you get a leg up and start firing now or at least stop hiring?

You get a leg up. And in so doing, you make the prophecy come true. Other firms see less demand from your erstwhile and wannabe workers. But the other firms — there are 30 million of them — all do the same thing. So, voilÃ , you see fewer customers, and, gee, weren’t all the pundits right and, gee, weren’t you smart to get a leg up?

Economists use different words to describe the economy’s ability to freak out and spontaneously contract based on nothing more than hearsay. Sunspot equilibria, multiple equilibria, coordination failure, and animal spirits (coined by Keynes) are all used to reference what FDR told us we had most to fear: fear itself.

Personally, I think The Hysterical Economy best describes this problem. It says three things in one phrase. First, the economy goes nuts. Second, the economy doesn’t need a good reason to go nuts. Third, the state of confidence is a precious public good.

The economy certainly went nuts in 2008. Around the developed world, 27 major financial companies had near-death experiences. Yet only one, Lehman Brothers, actually closed down. True, there was no loss of life or physical property, but Lehman’s collapse sowed panic throughout the land and to all the inhabitants thereof, particularly our so-called leaders in Washington.

President Bush said, “This sucker is gonna blow.” Sure enough, it blew as employers got a leg up by firing 8.5 million people over the next 19 months. Had they fired all 8.5 million the day after Lehman went under, everyone would have realized this was coordinated panic. But the panic built over time as more and more “experts” and “leaders” whispered and then spit out “Great Depression” — two words that were searched extensively on Google in the days and months after Lehman died.

Today we’re searching “fiscal cliff,” two words strung together by none other than Fed chairman Ben Bernanke that are both panicking the public and justifying yet further delay in dealing with our country’s enormous fiscal problems.

Ten thousand baby boomers are retiring each day. Within two decades all 78 million will be retired and collecting $40,000 per person (in today’s dollars), on average, from these three programs. These and other projected expenditures combined with our historically low average tax rates have produced, not a fiscal cliff, but a fiscal abyss. The fiscal gap separating the present values of all future expenditures and all future revenues is now $222 trillion!

As we justify doing far too little far too late, the fiscal gap, the only economically appropriate measure of our government’s true indebtedness, is growing at a colossal pace, by $11 trillion over the past year alone! To put $11 trillion in perspective, it’s as large as the entire stock of official debt in the hands of the public. So if we want to panic, there is something real to panic about. It’s the fiscal abyss, not the fiscal cliff.

This said, what’s needed is not panic, but leadership. The president and other politicians need immediately to stop scaring the nation about the fiscal cliff. In so doing, they are coordinating everyone’s expectations on recession and, thereby, assuring it will come.

Two-thirds of the public are now convinced the economy will face major problems come Jan. 1. And corporate America is already cutting back on investing and hiring.

If Congress remains deadlocked, which seems likely, and recession ensues, both parties will claim “I told you so.” What they will miss is that their telling us so, not making minor fiscal adjustments relative to what’s needed, will likely be the true source of the recession. Our economy is crazy enough. We don’t need hysterical leaders to drive it further nuts.

Paul Solman: In dismissing the dangers of the fiscal cliff, Larry could, in theory, be right. On the other hand, his sketch of fear feedback loops seems to undermine his optimism. If people are all moved to “get a leg up,” then panic is in the air, no? The betting here is that politicians, well aware of the danger, will avert the fiscal cliff before we reach its lip. But if they don’t reach an agreement, why wouldn’t the forecasts of doom come true? Isn’t that why sociologist Robert K. Merton came up with the indelible phrase “self-fulfilling prophecy”? “Hysteria” is an outdated, in fact sexist term. But in the context of the economy, it describes a deeply human tendency that cannot simply be wished (or counseled) away. And once you expect others to act “hysterically,” in either a boom or bust, you’d be foolish to buck the trend. Keynesians like Paul Krugman believe that a sudden spending shock to the economy should we vault over the fiscal cliff would spiral us down and down. He’s really predicting just the negative feedback loop that Larry has described.

This entry is cross-posted on the Making Sen$e page, where correspondent Paul Solman answers your economic and business questions.