Stockton, California: the Most Miserable City? 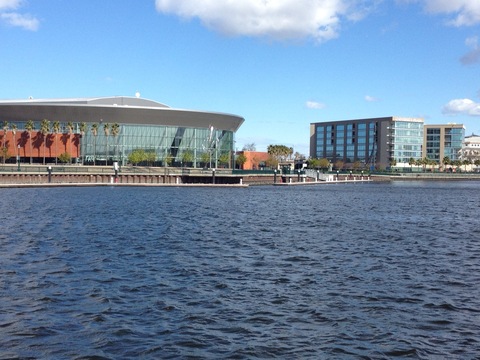 Stockton, Calif., has been plagued with financial woes since the housing crisis began.

Poor Stockton. Last year*, Forbes Magazine named the California town the most miserable city in the U.S. And now Stockton is on the verge of bankruptcy — having built more than it could pay for and having promised pensions and health benefits to early retiring city employees. It’s enough to demoralize a community that even now has a lot of pride and a fair amount to be proud of.

Stockton is the home of the University of the Pacific, which was called College of the Pacific when jazz artist Dave Brubeck went there in the last century. The city boasts a healthy agricultural economy, which has its ups and downs but nevertheless provides stability in the nation’s most productive agricultural region, California’s Central Valley. And Stockton has a modern port, built on a channel that comes inland from the San Francisco Bay. The port has done well of late, despite the economy. It has locally owned banks that didn’t give loans to people who couldn’t pay them back, and that remain solvent. So what’s the problem?

The problem is one that more and more American cities and communities are facing. Stockton’s city fathers and mothers believed and helped perpetuate all the hype emanating from developers and building contractors who constructed houses and shopping centers on cheap agricultural land that was almost within commuting distance of San Francisco. People came and bought the houses, whose prices were inflated. Then the national deluge hit; the new residents couldn’t pay their mortgages, and the homes were foreclosed on. Prices dropped by as much as 65 percent. The shopping centers didn’t have enough customers, so businesses closed and stores went vacant. The high-flying construction industry essentially collapsed, throwing people out of work. So down went income and property and sales tax revenue that Stockton was relying on to pay for what it had bought.

What it had bought in the boom years were a new ballpark, a city activities center, a new hotel, an ice rink, some parking garages and a lovely marina on that same channel the port uses. It had floated bonds to pay for all those goodies, many of which sit largely empty today. The bondholders — and it’s unclear exactly who they are since bonds often get traded — may not get paid back; some of the bonds are already in default. But it wasn’t just spending on buildings that pushed Stockton to the brink. Like most California cities, the city offers retirement at age 50 to police and firemen, at nearly (or in some cases more than) their last year’s pay. Plus, they decided that since so many city employees retire before they’re eligible for Medicare, the city would provide health insurance as an additional retirement benefit.

Times were good when the city council voted for those plums. The tax revenues were coming in strong, and city officials confidently predicted the good times would roll on. But of course all that has changed. Today, for example, health care costs for retirees total more than it does for current city workers. And in the wake of all the trouble, Stockton residents and officials are at each other’s throats. A recent front-page column in the Stockton Record began: “Stocktonians have been betrayed by irresponsible public officials and political toadies who steered the city toward a fiscal cliff and retired on a champagne pension.”

Former City Manager Dwane Milnes, who was one of the targets of the column, vehemently disagrees. He argues no one could have foreseen the financial trouble on the horizon. Stockton spent prudently, he claims, and besides, most retirees are getting modest pensions and benefits they worked hard for.

But that hasn’t calmed the waters. At a recent City Council meeting, some citizens vowed to kick out the entire council at the next election. One former councilman said the city isn’t even close to bankruptcy. And retirees complained they were being blamed unjustly for the whole mess.

It is a mess. Stockton is a poor area to begin with, overshadowed by the nearby San Francisco Bay Area where technology is driving a vibrant economy, and even by Sacramento, the state capital to the north where state government keeps the city employed. Stockton has — as one resident, a substitute teacher by the name of Ronald Schwartz, put it to me – “a non-diversified agricultural based economy.” He and others consider the area akin to Appalachia. Unemployment is around 17 percent; income levels are very low. As Schwartz put it:

“I think that this is such a rough place that people who are highly educated use it as a springboard to get jobs in other places, and what it leaves behind is not the cream of the crop. The really smart people don’t want to stay here. They don’t want to be here with the violence and the crime and everything.”

One thing builds upon another. The poor financial situation has forced the police force to drop by 27 percent recently. And that, of course, has made the already high crime rate go up even more.

So, yes, poor Stockton. As it tries to fight off bankruptcy, it realizes that the hole it is in seems to be getting deeper. And calling it the most miserable city in the country “is like bayoneting the wounded,” claimed City Manager Bob Deis. He is negotiating with its creditors — from bondholders to retirees and unions — hoping for a break.

(Watch the segment on Stockton here)

*This sentence has been updated. Due to an editing error, the original version stated that Stockton was named the most miserable city this month. In fact, this year’s version of ‘most miserable cities’ from Forbes places Miami, Fla at number one. Thank you to a commenter who pointed out the mistake.