The Plusses and Pitfalls of Teaching Online 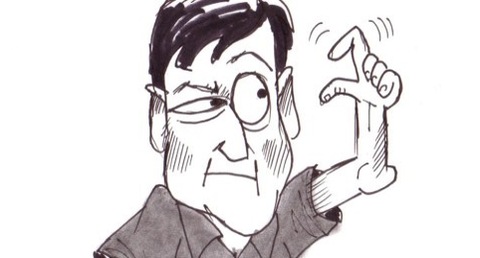 Dan Ariely is not just a great and funny teacher, but he’s dedicated his life to making the world a somewhat better place. To that end, he’s produced an online course on behavioral economics that already has attracted 140,000 students.
Ilustration of Dan Ariely by Coursera.

Dan was featured on The Business Desk most recently when he explained “Why Our Brains Might Not Be Able to Resist Black Friday” — that is, why some of us can’t stop shopping. It elaborated on an observation he made when we interviewed him, his kids and Sesame Street’s Grover, among others, about the nearly irresistible allure of instant gratification, a story subsequently sampled on the Stephen Colbert show, necessitating a response from myself, Dan and family.

Dan also appeared on PBS NewsHour during harder times. During the depth of the financial crisis in early 2009 he used a stuffed dog to illustrate the “learned helplessness” Americans were then feeling. (Dan answered follow-up viewer questions in a one-on-one with me: “Money, Morality and How We Make Economic Decisions“)

Dan used Valentine’s Day in 2011 to reassure viewers that it’s okay to spend money on gifts, despite what economists call “the deadweight loss of Christmas.”

And he’s the man behind the inequality quiz that we featured that same year, “Land of the Free, Home of the Poor” using what’s now being called “the Ariely chart.” It has since gone viral, though we modified the data somewhat in a follow-up story.

Dan has been working for the past year to craft a course for free, online consumption.

Dan Ariely: I am an experimentalist both in my profession, and in my nature. So, when Peter Lange, the provost at Duke University, asked me if I wanted to teach a massive open online course (MOOC), I naturally said yes (not to mention that he is my boss).

Among other things, this was an interesting lesson in the extent to which I can underestimate the amount of time and resources that it takes to produce such a class — but all that is behind me now and the class is just getting on its way.

Here is my invitation video for the class:

The class is just starting but I am already learning a lot from it. I have learned that some students feel that it is their basic human right to get free education (they call it free but of course free in this case is a shorthand for “someone else should pay for it,”) while the majority feels privileged to live in a time when such adventures are possible. I am also learning how generous and helpful the students can be toward each other in the discussion boards. And above all, I feel more connected to about 140,000 more people on this planet, across 138 countries. It is truly a privilege.

And if you want to join this adventure, all you need to do is to check out my class on Coursera.

The proprietor of this page, Paul Solman, posed a few specific questions. The first: How does the quality of online discourse compare to in-class discussion at Massachusetts Institute of Technology and Duke, where I’ve taught?

My answer is that so far (and as I note, the class has just begun, so it may be too soon to say), the only way to answer this question is to start by differentiating between the average discussion quality and the discussion quality of the outliers, because you get a very different picture when you examine them separately.

In terms of average quality, we have to consider the environment of a typical four-year university student, which leads to a very different approach to academics. These students often live on campus, show up to class and have their meals on campus, spend lots of time studying in the library, and are generally immersed in academia all day every day. They live to learn, at least at Duke and MIT, and their waking hours basically revolve around education.

As a result, they have more resources, time, and attention to devote to their studies, as well as friend groups who share the same collective experience. Taking this unique kind of atmosphere into account, the average quality is higher in regular classes.

At the same time, there’s a great deal of room for variance once you have over 140,000 students in a class. There’s a substantial probability that at least some students will be engaged, knowledgeable, thoughtful, and passionate about the class. And indeed, the discussion boards for my online class show just this — a select group of students truly stand out as motivated individuals who are taking the content seriously and thinking critically about how ideas can be developed and applied to the real world.

In this regard, the diversity of backgrounds is also a huge benefit in online classes that are available internationally. We hear from students of different ages from around the globe who have so much to contribute. And they not only contribute by sharing their perspectives with their professor and teaching staff, but also with their fellow students. They help each other out and take the strain of dealing with such a large group off of the professor. I am thoroughly grateful that they are so willing to help their peers.

The interesting thing with variance, however, is that there’s also a low tail. And as class size increases, it also increases the likelihood that there will be some people in this tail who are bitter, annoyed, and disgruntled in their personal lives and looking to express this anger in a public space.

There will inevitably be a couple students who are prone to complaining and tend to be very vocal with their opinions. I’ve seen some of this in my online class, and have tried to do what I can to calm the waters. In contrast with the online space, when people meet face to face they are more likely to censor themselves and put forth more effort to make a good impression. When you are talking to a list of students, strangers who you will probably never meet, you may be less likely to care about whose feelings you hurt or how your comments could come off as slanderous. This especially shows up when people have the ability to post anonymously, which is an option that Coursera provides.

Another of Paul’s questions was, “Doesn’t it matter that you and the students are not in the same physical space?”

When I give lectures in front of a video camera, I simultaneously play the student role in my mind and imagine that person sitting across from me, reacting to what I say. I try to be as clear as possible to that imaginary student.

The problem is that my imagination is limited in many ways, which means that every time I underestimate the clarity, the lecture doesn’t live up to what I could do if I had students in front of me giving me real-time feedback, helping me tailor it to their needs. This problem, by the way, becomes much more challenging as the number of students from different countries, with varying levels of English skills, join the class.

I can hardly imagine, for example, the complexity (and potential confusion) of someone from the Czech Republic trying to understand my English in an Israeli accent. But if this person were sitting in front of me, I would be able to interpret their blank stares and raised eyebrows and offer a different explanation of the material. And perhaps most importantly, I feel that my sense of humor does not transfer as well in the online environment. Or maybe this is just what I’m telling myself.

As for the students, I think it matters a great deal in terms of motivation and the connection to the material. And that helps answer Paul’s next question, whether or not the current university business model is “doomed?” “Is your video an accurate depiction of the future?” Paul asked.

I don’t think that the future of the university is doomed for a few reasons. First, having a scheduled class with obligations, deadlines, exams, real consequences and real rewards is incredibly important for human motivation and getting people to spend the necessary time and effort to really understand the material. The second reason is that the model of many universities, in which students study and live together, is a particularly helpful model for creating the environment that people need to take their education seriously. It is not just about the particular classes, but about being immersed in an academic environment for a substantial period of time.

I also think that some of the teaching in traditional colleges could be transferred to video lectures, but rather than serve as a replacement, they could be used as a supplement to free up the regular classroom to have higher level discussions and debates. This is the “flipped classroom” approach that has been getting so much hype. In essence, it could make the undergraduate college experience more similar to the graduate experience, at least in terms of the quality of the discussion.

And finally, video lectures are incredibly time-consuming to create. The team that worked on the videos for “A Beginner’s Guide to Irrationality” figured out that we spent about 150 hours on each hour of video that was produced. Of course, we could have spent much less time and effort, but then the quality would have suffered and the learning experience would have taken a toll. This initial effort was worth it to me, but I think that spending so much time revising the lectures, improving them, and creating more classes, is something that very few professors and universities will be willing to do long-term.

Paul’s last question was the most personal: “Do you enjoy virtual teaching more than physical?”

I’d answer that there are many ways to interpret the word “enjoy.” When I’m in a classroom and have the benefit of the reactions from my students (making eye contact, laughing at my jokes, and so on), I get immediate gratification from teaching. Online classes are very different in this respect. You put in a tremendous amount of effort upfront (we’ve been working on this class for about a year), and for an extended period of time you don’t get any feedback for all the hard work.

On top of that, in a physical classroom I learn new things from my students every day. They ask interesting questions, bring their own examples, and at the end of each class I often feel as if I’ve learned something as well. In an online class, however, I don’t get feedback until much later — after preparing, taping, and polishing the lectures. At this point, when the class has started, I do get to enjoy the feedback, but it is less connected to my efforts.

When I teach in the classroom, I also try to explain things in different ways and see how the students react, and depending on their responses I can instantly fine-tune my explanations so that they will be most helpful. And finally, did I mention that my sense of humor does not always transmit as well through video?