With all the strife over public sector unions, including irate e-mails in response to our pension coverage on the program, we thought we’d lighten the mood today by sharing some recent political cartoons. 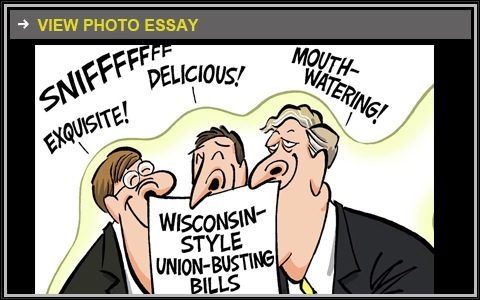 In our second story on public sector pensions, we tried earnestly to distinguish the pension issue from the death match in Wisconsin: “The most visible fight has been in Wisconsin, of course, mainly over collective bargaining. But that’s obscured the dominant issue in many states and cities: retirement promises for which insufficient funds were set aside.”

That did not deter viewers from complaining. Many hear the word “Wisconsin” these days and see red, which tends to color the rest of what they’re listening to. Quite understandable, I guess, given the spiritedness (some would say mean-spiritedness) of the Wisconsin standoff. So too the preoccupation of editorial cartoonists with the so-called Badger State, battleground of the anti-public sector union movement, as you’re about to witness.