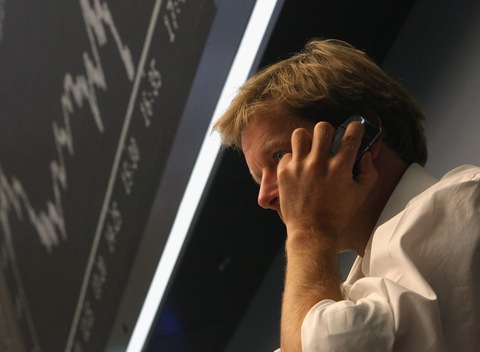 Trader at the Frankfurt Stock Exchange in Germany. Photo by Ralph Orlowski/Getty Images.

The U.S. markets lie as still today as the birds on America’s platters, but the same cannot be said for fluttering Europe, or anywhere else in the world, for that matter. Thus, while we pause to wish everyone the most convivial of Thanksgivings, we thought we’d alert you to a story that may (or may not) be a big one tomorrow: the rise in German bond rates taking place as we speak (and eat) and that, I noticed halfway through writing this post, made the front page of Thursday’s New York Times.

I realize that I’ve become something of a broken MP3 file with regard to the “bond vigilantes” — investors in the bond market, that is. I’ve reported, some might say obsessively, their somnolence with regard to U.S. debt dithering, instead of waking up to our supposedly criminal irresponsibility to balance our books and, in retaliation, wreaking frontier vengeance by forcing us to hike our interest rate. It was gratifying to see that The Daily Beast’s Andrew Sullivan and Paul Krugman both reposted my latest rant, though Krugman, of course, has been noting the vigilantes’ torpor longer than I have.

Today’s bond scare comes from Germany. The yield (interest rate) on the U.S. 10-year note has sunk so low, it’s below the official inflation rate. To borrow money, the U.S. pays an annual interest rate of merely 1.88 percent — locked in for 10 years. Think of it as the bargain mortgage of the century. But in Germany, by contrast, the 10-year rate has risen to 2.19 percent as I write, above even the rate the U.K. is obliged to pay (2.16 percent). Still very low by historical standards, but a huge jump in just a few days. And as we know from Bear Stearns, Lehman, AIG, Fannie, Freddie, Greece and now Spain and Italy, once the “bond vigilantes” begin to demand higher interest rates, there may be no stopping them, especially since the higher the interest rate, the more a debtor is forced to borrow, raising further suspicions as to its solvency. The dreaded vicious circle of debt.

So what, you might ask, is going on in Germany? Why the first intimations of a possible vicious circle there? Or, as astute Twitter follower @leighblue put it yesterday, rather rhetorically: “Do you think higher bund yields signal doubts over German credit, expected ECB easing or higher growth? How would you tell?” 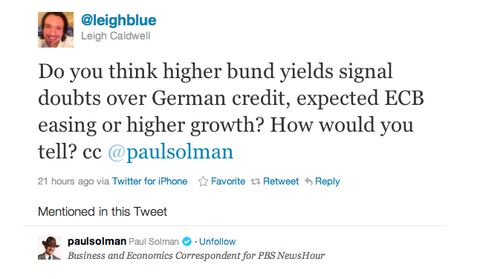 As you no doubt have figured out for yourself, “bund” is “bond” in German. Thus “bunds” are German bonds, denominated in the olden days in Deutsche Marks, these days, in euros. @leighblue’s point is that any of these three reasons might explain a rise in interest rates.

First, a one-sentence primer on interest rates. To keep things simple, let’s say they are made up of three components — repayment risk, inflation risk, the tug-o-war between the supply of credit and the demand for credit. @leighblue’s tweet nicely covers all three.

The second possibility is inflation risk via “expected ECB easing.” If the ECB (European Central Bank) “eases” — creates lots of new Euros, that is, the way our Fed can create dollars — it may also create Euro inflation.

Third is supply and demand. “German growth” would mean more demand in Germany for credit as consumers spent and businesses expanded. The greater the demand for money, the higher its price, which is to say, the higher the German interest rate.

So, which explanation is the most plausible?

Certainly not number three. The data coming out of Germany do not suggest a vibrant economy. And it promises to cost the German economy plenty to bail out some or all of its Euro “partners”: the PIIGS or GIIPS or, if you prefer, SPIGI (Spain, Portugal, Italy, Greece and Ireland) Yes, Germany picked up the tab for reincorporating its eastern half after the Fall of Wall (in Berlin). But that was a smaller project.

So then is expected euro inflation the force driving Germany interest rates higher? Maybe, but then again, maybe not. If the ECB does create more euros, it would almost surely use them to buy up European bonds. That would tend to bring down interest rates by raising bond demand: more buyers; lower price of money. That’s certainly what has happened thus far in the U.S. — with dollars.

We are left with @leighblue’s first culprit, then: repayment risk. If Germany is going to bail out the IGIPS, it’s going to have to borrow more money. Its cumulative debt is already above 80 percent of its annual economic output (GDP), greater than Hungary’s. How much more can it borrow before investors start hiking the interest rate? Or, they already have — started hiking the rate, that is.

Bill Gross and Mohamed El-Erian, the kingpins at PIMCO, the world’s biggest bond investment company, have been calling Germany the “whitest of the dirty shirts” — meaning, the least unattractive borrower in Europe. The dirtier the shirt gets, the more Europe’s credibility — and thus, its credit — is at risk.