Column: The world economy is running on monetary fumes

With global growth stalling, the International Monetary Fund has repeatedly revised down its forecasts and is now calling for more assertive policy action to boost demand. In normal times, central banks cutting short-term interest rates is — even for liberal Keynesians like Paul Krugman — sufficient to address deficient demand. But these are most surely not normal times.

As our new Council on Foreign Relations Global Monetary Policy Tracker shows, a record 23 countries — accounting for a quarter of world GDP — now have central-bank policy rates of zero or less. A further six — including the United States — have policy rates of 1 percent or less. This means that the scope for monetary stimulus using conventional tools, such as policy-rate cuts towards zero, is — as the graphic below shows — nonexistent or limited in nations accounting for 60 percent of the global economy. 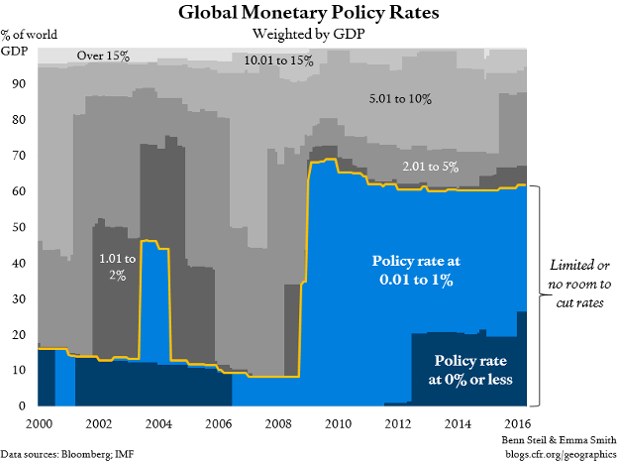 But what about unconventional tools?

Central banks in Europe and Japan have shown that monetary policy rates can go below zero, but there is a lower limit. This is because banks and individuals can switch to holding physical cash — which pays zero interest — instead of deposits earning negative interest. Holding cash is not costless, particularly large sums that need to be stored and insured, which is why slightly negative rates can potentially be effective.

But how low can rates go before there is switching into cash? U.S. Federal Reserve staff concluded in 2010 that the lower bound was around -0.35 percent. They were probably, however, underestimating the full costs of storing bills. European central banks have shown that rates below this are possible — the deposit rate is now as low as -1.25 percent in Sweden. Still, it seems the end is nigh for pushing such rates lower.

A record 23 countries — accounting for a quarter of world GDP — now have central-bank policy rates of zero or less.

Additionally, there are unintended side effects of negative rates that central banks don’t like. One is reduced bank profits — or bigger losses. Banks have generally been unwilling to try passing on negative rates to depositors, and such reluctance compresses the spread between what they earn on lending and what they must pay out to account holders. And many banks in Europe are loaded up with nonperforming loans and are in poor shape to withstand further spread compression. Money market funds, a significant source of short-term bank funding, are also being pushed onto life support. Negative rates mean the funds may either fail to repay investors in full (known as “breaking the buck”) or simply shut down. Former Fed Chair Ben Bernanke thinks these risks mean that pushing U.S. rates as deeply into negative territory as Europe has done is unwise.

What else can central banks do then? Once short-term rates are at the lower bound, they can purchase longer-term assets to reduce longer-term rates — known as quantitative easing. To date, these assets have predominantly been government and quasi-government bonds (such as those issued by supranational agencies like the European Financial Stability Facility). But the Fed has also purchased mortgage-backed securities, and the European Central Bank has bought bank-issued covered bonds, as a means of pushing down borrowing costs broadly in the economy.

Yet central banks cannot purchase such assets in unlimited quantity. If they buy too much of them, the markets dry up. And it may be difficult or impossible to restart trading once economic conditions return to something more normal.

The ECB has therefore decided to push into riskier assets. To ensure it can continue to meet its 80 billion euros monthly purchase target, it will begin purchasing investment-grade, non-bank corporate bonds in the second half of this year. The Bank of Japan is buying equities.

Like negative rates, quantitative easing produces its own headaches.

But like negative rates, quantitative easing produces its own headaches. Central banks are rightly reluctant to involve themselves in credit allocation — picking winners and losers by subsidizing rates for some borrowers and not others. Big companies love to have their bonds and stocks bought up by central banks as that pushes down their cost of capital. But what about companies too small to issue them? They are left out and, therefore, compete at a disadvantage.

Some bonds are also yielding negative rates, meaning that the central bank loses money by buying them. Currently, any bond with a maturity below 9 years in Germany and 10 years in Japan will lose money if held to maturity. To limit such losses, the ECB will only buy debt with a yield above its deposit facility rate, which currently stands at -0.4 percent.

Not surprisingly, there has been fierce debate about the efficacy of unconventional policy measures. The European Central Bank has clashed with German officials over the appropriate path of policy in the euro area. German finance minister Wolfgang Schaeuble has argued that expansionary monetary and fiscal policies are the cause of economic woes, not the solution. And ECB minutes show divisions within the governing council. Most recently, some members questioned the impact of corporate bond purchases — as the ECB would be helping large companies, which are not generally constrained by high financing costs or a shortage of cash. Jens Weidmann, the president of Germany’s central bank Deutsche Bundesbank, has reportedly opposed multiple elements of the ECB’s asset purchase program. Similar rifts are evident on the Bank of Japan’s board, with the vote to lower rates into negative territory split 5-4.

Furthermore, the legality of unconventional measures is in question. The German high court challenged the legality of ECB government bond buying. In the United States, an internal Fed memo from 2010 revealed uncertainty over whether the Fed could legally charge banks interest on their deposits.

In short, the world economy is running on monetary fumes. We had better hope it picks up steam on its own, because policymakers are unlikely to be of much further help.

With monetary policy perhaps nearing its practical or political limits, fiscal stimulus is now the tool of choice for notable centrist Keynesians like Larry Summers. Yet there are also significant barriers to expanding government spending. In countries like Italy and Japan, fiscal stimulus is effectively off the table, owing to already high levels of government debt. The Japanese government is torn between wanting to reduce debt (now 250 percent of GDP) through further sales tax hikes and wanting to boost growth by cutting taxes or spending more. In those countries that do have fiscal space — such as Germany and the United States — there is fierce political resistance to using it. The German government is committed to budget balancing. In the U.S., the Republican Congress opposes spending hikes, and the Democratic White House opposes tax cuts.

READ MORE: Are skyscraper races a warning of economic chaos to come?

In short, the world economy is running on monetary fumes. We had better hope it picks up steam on its own, because policymakers are unlikely to be of much further help.

Left: The world economy is running on monetary fumes, writes Benn Steil and Emma Smith of the Council on Foreign Relations. Photo by Leonhard Foeger/Reuters