The yen is rising. What happens if Japan tries to push its currency down?

The yen has risen almost 20 percent over the past year, and a quarter of the rise has taken place since Britain’s historic Brexit vote on June 23. The stronger yen threatens to derail the Bank of Japan’s efforts — including massive asset purchases and negative interest rates — to push the country away from deflation and toward its 2 percent inflation target.

In May, Japanese Finance Minister Taro Aso and colleagues warned of their willingness to intervene in currency markets to counteract upward pressure on the yen. And in the wake of the Brexit shock, even Prime Minister Shinzo Abe joined the chorus.

The yen has risen almost 20 percent over the past year. A quarter of the rise has taken place since the Brexit shock.

If the Ministry of Finance does start buying dollars to push the yen down, it will mark its first direct market intervention since 2011. And the U.S. Treasury would have to label Japan a currency “manipulator.” 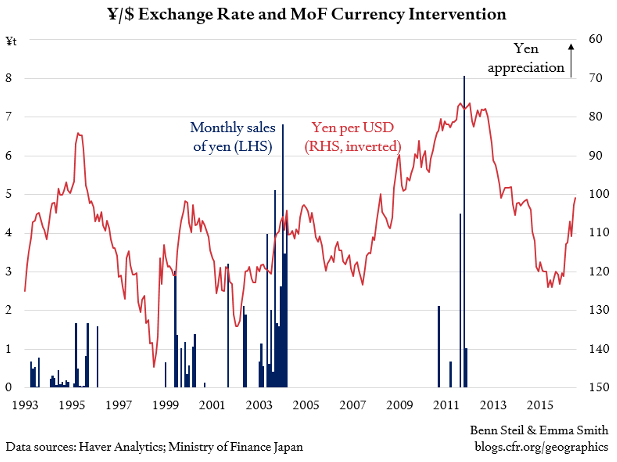 Since April, the U.S. Treasury has been applying a quantitative framework to determine if a country is managing its currency inappropriately for competitive advantage — that is, keeping it undervalued. Japan already meets two of the three criteria — a bilateral trade surplus with the U.S. over $20 billion and a current account surplus greater than 3 percent of GDP — and will meet the third if intervention exceeds 10 trillion yen in a 12 month period. This is not a high threshold historically — Japan sold 14 trillion yen in 2011 and 35 trillion yen between 2003 and 2004.

If the U.S. Treasury were to label Japan a manipulator, the country would be the first such designee since China in 1994. But what would it actually mean?

In the first instance, according to the Trade Facilitation and Trade Enforcement Act of 2015, bilateral talks would need to be held to agree on a path of corrective action. If after one year, the treasury secretary determines that such action is not in train, the president would then be required to take one or more of the following steps: 1) deny the country U.S. Overseas Private Investment Corporation financing, 2) exclude it from U.S. government procurement, 3) call for heightened IMF surveillance or 4) reconsider open trade discussions.

The stronger yen threatens to derail the Bank of Japan’s efforts to push the country away from deflation and toward its 2 percent inflation target.

The fourth is clearly the most consequential, since it would involve the as-yet unratified 12-nation Trans-Pacific Partnership. Neither U.S. presidential candidate currently backs the Trans-Pacific Partnership. But whereas Donald Trump has called it a “rape” of the United States, Hillary Clinton was for it before she was against it — and some suspect she would want to flip back once in the White House. The interesting question would then become under what conditions she would hold the agreement hostage to a manipulation dispute.

We actually think that, perversely, a manipulator designation for Japan could save the Trans-Pacific Partnership. This is because a cosmetic agreement with Japan to modify its currency policy, perhaps after a period of yen depreciation, would give Clinton a fig leaf for claiming she had strengthened the trade deal — by establishing a precedent outlawing manipulation. Despite inevitable howls in Washington and Tokyo, the end result will be welcomed with relief by the agreement’s supporters.

READ MORE: Column: Will Brexit affect U.S. consumer confidence? The outcome may determine our next president

Left: A woman counts Japanese 10,000 yen notes in Tokyo. Faced with a strong yen, Japan might look to manipulate its currency. Economist Benn Steil and Emma Smith look at what might happen if Japan decides to do so. Photo by Shohei Miyano/Reuters