Those Unemployment Figures May Be Even Worse Than You Think 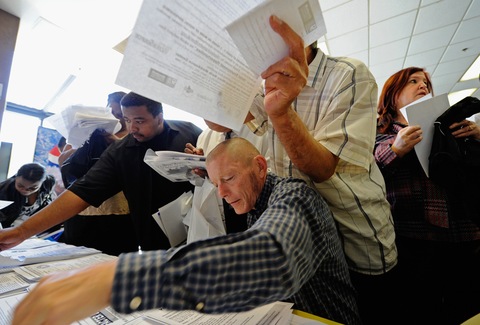 Job seekers register and pick up jobs fliers from employers at a June jobs fair in Los Angeles; Photo by Kevork Djansezian/Getty Images

In the last week, the economic news has gone from not-so-good to troubling. Friday’s low June job numbers – only 18,000 jobs were created for the month – came along with downward revisions for past months.

As bad as those numbers are, they aren’t a big shock to Patchwork Nation. As we have noted in multiple posts in recent weeks, as the manufacturing and home-construction sectors sag there simply isn’t a lot to get the economy going.

Using Patchwork Nation’s county type analysis, the latest jobless numbers offer real concerns about where the country may be heading. County-level unemployment figures are collected differently than national numbers and the take longer to collect. May data are the latest available, but they show the national figures may underestimate the country’s economic woes.

Unemployment was not up everywhere in Patchwork Nation in May, but it was up in the places it can least afford to be: the three wealthiest county types – the wealthy Monied Burbs, big city Industrial Metropolis and formerly growing Boom Towns. The Industrial Metros in particular saw a big bump in unemployment, up to about 9.8 percent in May from 9.5 percent in April. The others saw smaller increases of about .1 percentage points.

With people in those three country types struggling to find work, consumer spending is going to find it hard to grow. And without a rebounding consumer economy – which makes up two-thirds of the U.S. economy – the general economic picture isn’t going to improve.

There are a few bright spots in the May numbers. The small-town Service Worker Center counties and aging Emptying Nests did see a small decline in unemployment – a drop of .1 percentage points in each. But those counties, particularly the Service Worker Centers, often add jobs in the summer months, because they are located in local vacation areas, as we have noted in more in-depth reporting.

And, as we wrote last week, people in those Service Worker Centers are feeling a bit more optimistic about this summer as more people from wealthier communities come for vacation stays. The question, looking at these numbers, is how long will that optimism last?

Tractor Country, rural agricultural counties, also has slightly better numbers in this report. But that is partly due to the way those places function. The agricultural economy feels different pressures and moves in different cycles.

For all the other county types, however, unemployment was flat or rising in May. In other words, the upticks in those counties, which are based on unique situations in those places, actually masked the larger problems in the economy.

And that may help explain the new June unemployment numbers. If the small increase in seasonal hiring in those communities was a short, one-month bump in May, June’s numbers, as bad as they are, may be a more accurate picture of where the U.S. economy is right now.

And on top of all of that, a new analysis from the financial forecasting firm Moody’s Analytics raises a real red flag. A good deal of the money that has pumped up the current anemic recovery has come from the federal government – and it is soon going to go away as stimulus money is spent.

Looking at these unemployment figures, that is certainly a disconcerting prospect.

Add into that the short-term and long-term government spending cuts that are being brokered in the debt ceiling talks and the problem looks bigger.

As Patchwork Nation has discussed in previous posts, many of the current economic problems are not something that can be hung on any party or politician. They are the result of long-term, structural economic changes compounded by the Great Recession.

There is no easy solution in the equation of getting the budget into balance while trying to prevent the economy from derailing.

These unemployment numbers make clear there are big challenges ahead. The next few sets of county figures – the numbers for June and July – will be critical in defining just how big.

Editor’s Note: Due to an editing error, an earlier version of this post showed incorrect figures in the chart for “Mormon Outpost” unemployment and incorrect nationwide totals. This version has been corrected.