Tool$ Tuesday: How the Government Spends Your Money

Just in time for tax season: a tax receipt calculator that shows you how the federal government spends your taxes.

It’s easy to use: just enter your federal tax amount for 2010 and press ‘calculate receipt.’ The tool then shows you, down to the penny, how much you spent on everything from defense to arts and culture. You can then order the results to see what you spent the most on (Spoiler Alert: it’ll be Social Security).

“We wanted to give people information about where their tax money goes,” said David Kendall, a senior fellow at Third Way, which produced the calculator. “We as people just don’t comprehend big numbers- millions and above. This brings [the budget] down to numbers you’re really used to- relative to the cost of a Subway sandwich. And it changes the way we look at the budget debate when it becomes personal.” 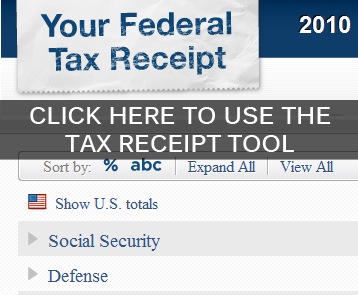 The folks at Third Way used government data to calculate the amount spent on individual programs as a percentage of the entire federal budget. (For more on how they put it all together, scroll to the bottom of the calculator and click on “Our Methodology.”)

For instance, if you paid $1,000 last year in federal taxes, you spent $92.85 on low-income assistance. For a more detailed look at where that money went, click on the category and you’ll see a breakdown of the programs that received this money: Food stamps ($20.44), Temporary Assistance for Needy Families ($5.07), and the Commodity Assistance Program ($0.08), for example.

If you want to learn more about a particular program, click the ‘?’ button and the government web page for that program opens.

Another purpose of the calculator:

He explained that some people believe the budget would be balanced if we eliminated, for example, foreign aid. “But when you’re at the cocktail party, where do you turn? Right now, that information is all over the [internet] and not really consumer friendly.”

“We want to educate people,” Kendall added. “If people don’t like what the government is spending their money on, they can tell that to their Congressmen.”

One note of caution: the calculator takes some liberty in combining agencies and programs.

“We put government terms in common parlance,” Kendall said. “For example, why is the National Forest Service part of the Department of Agriculture, while the National Park Service is part of Department of the Interior? We put those together, as it’s closer to what an average person understands of what the government does. Another example is international aid: it’s actually spread across several agencies. So we wanted to put that together to show where foreign aid goes.”

Let us know what you think when you’ve calculated your own “taxpayer receipt.” Were you surprised? Inspired to write your State Representative? Couldn’t care less? Comment in the section below.

WATCH: Buffalo Police hold news conference after officers suspended for use of force

U.S. consumers shunned borrowing in April as economy shut down

What to read, listen to and watch to learn about institutional racism

U.S. will allow limited flights by Chinese airlines, not a ban