The U.S. foreclosure crisis was not just a subprime event

The following summary was written by the NBER and doesn’t necessarily reflect the views of Making Sen$e. We will tell you, however, what the takeaway is: The U.S. foreclosure crisis, so commonly referred to subprime mortgage crisis, was not in fact, just a subprime event. While it began that way, it became a much broader phenomenon and mainly included prime mortgages. The findings suggest that effective regulation cannot just focus on restricting risky subprime contracts.

Many studies of the housing market collapse of the last decade, and the associated sharp rise in defaults and foreclosures, focus on the role of the subprime mortgage sector. Yet subprime loans comprise a relatively small share of the U.S. housing market, usually about 15 percent and never more than 21 percent. Many studies also focus on the period leading up to 2008, even though most foreclosures occurred subsequently. In A New Look at the U.S. Foreclosure Crisis: Panel Data Evidence of Prime and Subprime Borrowers from 1997 to 2012 (NBER Working Paper No. 21261), Fernando Ferreira and Joseph Gyourko provide new facts about the foreclosure crisis and investigate various explanations of why homeowners lost their homes during the housing bust. They employ microdata that track outcomes well past the beginning of the crisis and cover all types of house purchase financing — prime and subprime mortgages, Federal Housing Administration (FHA)/Veterans Administration (VA)-insured loans, loans from small or infrequent lenders, and all-cash buyers. Their data contain information on over 33 million unique ownership sequences in just over 19 million distinct owner-occupied housing units from 1997 to 2012. 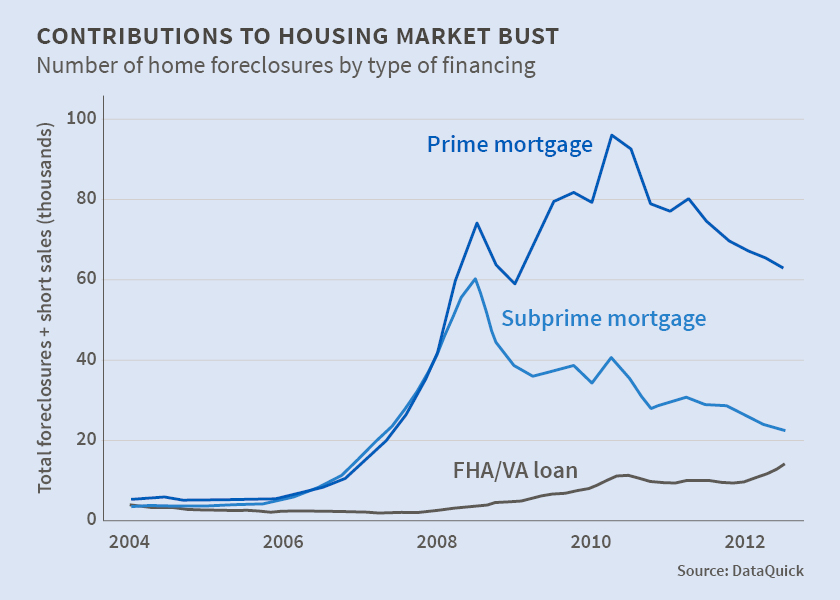 The researchers find that the crisis was not solely, or even primarily, a subprime sector event. It began that way, but quickly expanded into a much broader phenomenon dominated by prime borrowers’ loss of homes. Courtesy of NBER.

The authors’ key empirical finding is that negative equity conditions can explain virtually all of the difference in foreclosure and short sale outcomes of prime borrowers compared to all cash owners. Negative equity also accounts for approximately two-thirds of the variation in subprime borrower distress. Both are true on average, over time, and across metropolitan areas.

None of the other ‘usual suspects’ raised by previous research or public commentators — housing quality, race and gender demographics, buyer income, and speculator status — were found to have had a major impact. Certain loan-related attributes such as initial loan-to-value (LTV), whether a refinancing occurred or a second mortgage was taken on, and loan cohort origination quarter did have some independent influence, but much weaker than that of current LTV.

The authors’ findings imply that large numbers of prime borrowers who did not start out with extremely high LTVs still lost their homes to foreclosure. They conclude that the economic cycle was more important than initial buyer, housing and mortgage conditions in explaining the foreclosure crisis. These findings suggest that effective regulation is not just a matter of restricting certain exotic subprime contracts associated with extremely high default rates.

Left: While the U.S. foreclosure crisis began with subprime mortgages, it became a much broader phenomenon. Photo by Rick Wilking/REUTERS