An applicant speaks with a prospective employer at a New York job fair. Photo by John Moore/Getty Images

Distressing. That’s our verdict after studying this morning’s unemployment data for June.

Basic facts from the monthly survey of 60,000 US households: a couple of hundred thousand Americans entered the workforce, about that many more Americans got jobs, but the number of unemployed actually rose slightly. Officially “unemployed” means people who told the survey takers they had looked for work in the past 4 weeks and found nothing – not even an hour’s worth of unemployment. 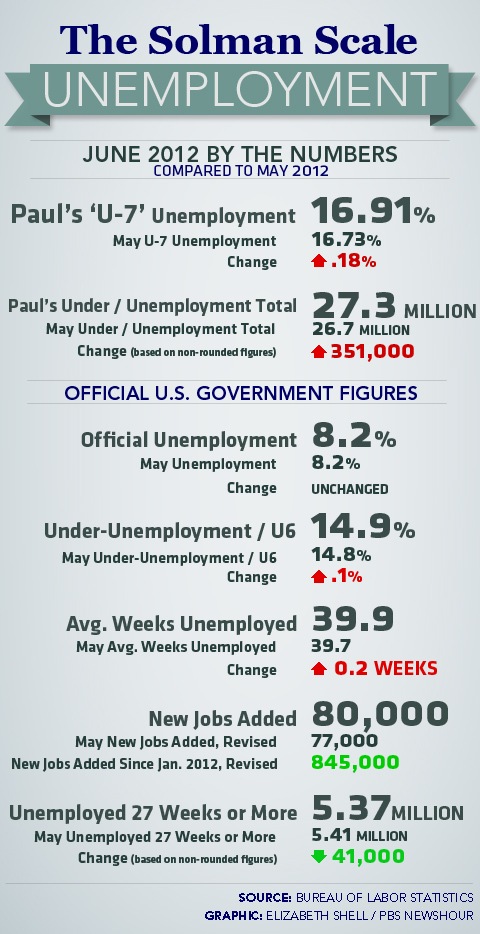 Bottom line from the Household Survey: the official unemployment rate, “U3” in the government’s tables, held steady at 8.2 percent.

Unfortunately, the more inclusive measure of un- and underemployment that we follow — and have dubbed “U-7” — rose. That is, the number of Americans who said they “want a job” but haven’t looked for work in more than 4 weeks swelled by some 200,000. These are the discouraged – including, I suppose, some folks who may be lying about their intentions. But in any case, they’re out of work and yet not counted in the official unemployment number. I devised U-7 to count them back in.

A confession. Due to our web statistician having been away last month, we miscalculated U-7 slightly for May. In fact it was 16.73 percent. Today’s number is higher: 16.91 percent, representing over 27 million Americans.

The other headline number you’ll be reading all day and tomorrow, of course, is the number of jobs that businesses report they’ve added. That’s the survey from which the 80,000 new jobs comes, the so-called “Establishment” (or “Payroll”) Survey.” It too was disappointing, since the economy needs to generate several hundred thousand jobs a month to put Americans back to work.

The other key numbers from the Establishment or Payroll Survey are its revisions of past data. As more “establishments” report their numbers for past months, those data are updated and change. Discouragingly, today’s revisions for the past two months show about 1000 fewer jobs were added than originally reported.

For those who’d like to read the government’s take, and/or get more deeply into the data, here’s the link to the Bureau of Labor Statistics “Employment Situation Summary,” with its press release and tables.

PS ps: There’s an employment-connected follow-up to our series on student debt.

Students who carry heavy debt are not taking public service jobs they would have otherwise sought. The evidence is well summarized at journalistsresource.org.