Once again, the monthly unemployment data give occasion for those who have hair to lose more of it. The Household Survey, from which the much-trumpeted “Unemployment number” comes, brings us a rise in official unemployment to 9 percent, due to a 200,000 person drop in the number of employed Americans. Our own comprehensive number of the un- and underemployed, U-7, rose to nearly 18 percent. But in almost mocking contrast, the Payroll Survey reports that firms added a quarter of a million new jobs. 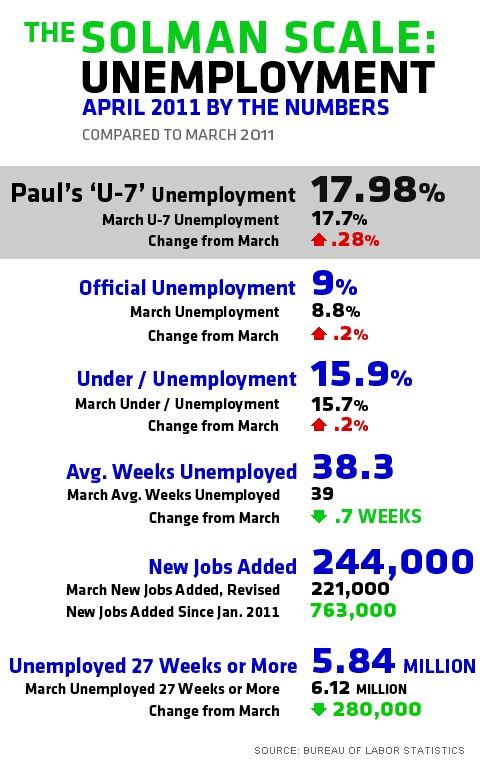 When people talk about the internal contradictions of capitalism, this is not what they mean, but perhaps it ought to be. I’ve been trying to explain such dueling data for years, since they so often occur when the monthly numbers come out: the Household Survey saying one thing; the Payroll Survey, quite another. The best short answer: trust Payroll before Household, but don’t take any given month that seriously.

In other words, April’s Payroll data represent pretty good news, especially when combined with the upward revisions of the past several months. As for the discrepancy with the Household data, liberal Dean Baker of the Center for Economic and Policy Research points out that he didn’t believe it when the unemployment number was coming down so rapidly in the past year. So why should he believe that it’s now going up?

For those who rely on this page for the dismal view, though, we offer the following:

1) The oft-repeated truth that the economy needs much faster job creation if it’s to make a dent in the overall unemployment rate, leaving month-to-month fluctuations aside. As conservative economist Peter Morici reminded us this morning: “The economy must add 13 million private sector jobs over the next three years — 360,000 each month — to bring unemployment down to 6 percent.” That’s because the population is growing — almost entirely due to immigration — and “productivity” is growing too: the ability to create more with fewer workers.

2) Last month’s unemployment insurance claims shot up dramatically, and those are from more recent data than today’s numbers.

4) Our own U-7 of 17.98 percent, which adds the total number of Americans who say that want a job, but haven’t looked in more than a year, to the government’s most inclusive number, “U-6.”