What Does Bankruptcy Surge Across U.S. Mean for Recovery Chances? 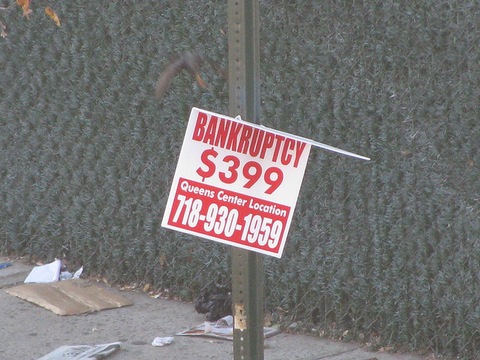 As a measure of economic pain, bankruptcies carry a special power. A bankruptcy is more than losing one’s job or home, it is essentially calling for a complete financial do-over.

Since 2007, the number of bankruptcies in the United States has nearly doubled. But that single national number is misleading, look closer and you’ll see that some places have taken a much harder hit than others.

County figures from the Administrative Office of the U.S. Courts show the nation’s wealthiest counties (see the map), the places we call the Monied Burbs, have seen some of the sharpest rises in bankruptcy filings in that period – a 92 percent bump. And following close behind them are the wealthy more exurban Boom Town counties, which saw an 80 percent increase.

(Actually leading the way are the Mormon Outpost counties with a staggering 138 percent increase, for reasons that are open to some debate).

The Burbs and the Boom Towns share a few common traits. They are both wealthier than the average county and better educated. And while it’s never polite to play the blame game – to declare, “it’s your fault” when you are suffering through, say, the worst economic downturn in the past half-century — those statistics raise questions about debt and credit in the nation’s wealthier enclaves.

And three years into the current economic morass, the bankruptcy data offer clues into the larger economic forces behind it and suggest the way back may be long and difficult.

Few Have Been Immune

To be sure, the Burbs and Boom Towns aren’t alone in their bankruptcy problems. Every one of the 12 county types Patchwork Nation examines has seen a jump. But some places saw their bankruptcy numbers increase by much less.

The less-wealthy Minority Central counties, with high numbers of African-Americans saw an increase of 30 percent. The Evangelical Epicenters, which also have lower incomes and high concentrations of born-again Christians, saw an increase of about 50 percent. Those numbers are nothing to write home about but compared the suffering in other places, those communities have done better.

The steep jump in the Mormon Outposts remains something of a mystery, even to academics who study bankruptcy, says Rich Hynes, a bankruptcy expert at the University of Virginia Law School. Some speculate that larger Mormon families play a role — it’s harder for a family of seven to weather hard times than it is for a family of four – not to mention church tithing, which runs at 10 percent of income.

But many of the Mormon Outposts are also high-growth areas since 2000, which means more homes purchased during the housing boom, when prices were high, and increasingly more community members who are not Mormons.

And getting beyond simply talking about “increases” there are clear divides in where the largest number bankruptcies lie in 2010.

In rural, agricultural America, the counties we call Tractor Country, only 2.4 people per capita declared bankruptcy this year. The big city Industrial Metropolis Counties led with way with 5.2 bankruptcies per 1,000 people – followed by the Monied Burbs and the Boom Towns, at 4.84 per 1,000 and 4.59 per 1,000 respectively.

Again, those numbers raise questions. Those three county types are the wealthiest of the 12 types Patchwork Nation studies. In theory, even when hard times hit, shouldn’t the people in them be better able to fend off bankruptcy?

Maybe, but there are a few other factors driving bankruptcies in them. First, Hynes says, is cost. “Bankruptcy is expensive,” he says. “It costs usually between $1,000 and $3,000 to file for bankruptcy. There are a lot of fees.”

There is, Hynes says, the difference between “formal bankruptcy,” when someone goes to court, and “informal bankruptcy” when the person or business that is struggling simply never pays and has assets taken. The latter, which is what is measured here, is likely to be the choice of better-educated, wealthier souls.

But there are larger socioeconomic factors at play, too.

“Certainly the tie between foreclosures and personal bankruptcies is quite a close one,” says Jim Gimpel, a University of Maryland professor who is consultant to Patchwork Nation. “We shouldn’t be surprised to see bankruptcies soaring in areas where people have gone under on their mortgages. Expect more of this in the next year.”

Second, there are signs that these communities are more willing that others to take on debt. As we wrote in the book, “Our Patchwork Nation,” the Boom Towns and the Monied Burbs in particular carry a lot of credit card debt – more than 80 percent of the people living in each were carrying some according to Pew data analyzed by Patchwork Nation.

Culturally, other communities simply seem to be more squeamish about debt. For instance, when Patchwork Nation looked at the percentage of bank branches in each county type that took money from the Troubled Asset Relief Program, there was a wide disparity.

Roughly half the bank branches in the Monied Burbs, Boom Towns and Industrial Metros were aided by the TARP. In the Tractor Country counties only 16 percent of bank branches were.

Still a Ways Before a Turnaround

Beyond “how we got here” though, the real message out of the bankruptcy data is “we may be here for a while.”

Two-thirds of the U.S. economy is fueled by consumer spending. And the Monied Burbs, Boom Towns and Industrial Metros have the most disposable income and about 180 million people combined. They will likely have to be at the root of a spending turnaround — and these numbers suggest the situation for that may not be ripe for some time.