What does your bubble quiz score say about you?

Editor’s Note: In the next few weeks, Charles Murray will analyze the data from the bubble quiz in a series of posts. This is the first. You can read Charles Murray’s second follow-up post, “Did you grow up in a bubble? These ZIP codes suggest you did,” here.

One of my central propositions in my 2012 book “Coming Apart: The State of White America, 1960-2010” was that a high-IQ, highly educated new upper class has formed over the last half century. It has a culture of its own that is largely disconnected from the culture of mainstream white America. I could expect that many of my readers would be part of that new upper class. The problem that stumped me for a while was how to convince them that their isolation is real. Eventually, I decided to try self-recognition. And so Chapter 4 of “Coming Apart” was titled “How Thick is Your Bubble?” and contained a 25-item quiz that let readers see for themselves where they stood on a 100-point scale. The lower their scores, the thicker the cultural bubble that separated them from the lives of ordinary Americans.

What is the relationship between scores on the bubble quiz and the socioeconomic status of the ZIP codes where people live?

A few months after “Coming Apart” was published, Paul Solman interviewed me for Making Sen$e. Paul and his staff also created a version of the bubble quiz that could be taken online. Just two weeks ago, Paul interviewed me again and posted an updated version of the bubble quiz on this page. As I write, more than 47,000 people have posted their scores. Along with their scores, most of them also reported their ages, current ZIP codes and the ZIP codes where they lived when they were 10 years old.

Over a series of posts during the next few weeks, I’m going to see what patterns, factoids and conceivable insights might be teased from these data, and I’m going to do it the way I do all of my data analysis — starting with the obvious stuff and seeing where it leads. So at this point, I don’t know how many posts there will be, and I don’t know what’s going to be in them.

At the outset, we need to get one thing straight: The bubble quiz does not try to test your familiarity with all of mainstream America, but with mainstream white America. Here’s how I explained it in “Coming Apart”:

Some of the questions are ones that whites will get right more often than minorities, and that people who do not live in metropolises will get right more often than people who do. That’s because I am writing about the problems of the new upper class, the new upper class is overwhelmingly white and urban, and the readers of this book are overwhelmingly white and urban. Note, however, that had I included questions that would be more easily answered by minorities in working-class urban neighborhoods, your score would probably be even worse.

Today, I start with the most basic question: What is the relationship between scores on the bubble quiz and the socioeconomic status of the ZIP codes where people live?

To express a ZIP code’s socioeconomic status, I have used an index that combines a ZIP code’s median family income and the percentage of adults who have college degrees (This is the method I used in “Coming Apart”). The index is expressed in percentiles, with a ZIP code’s score weighted by population. In other words: If you live in a ZIP code at the 85th percentile, that means 84 percent of Americans live in ZIP codes with a lower score on the socioeconomic status measure. The data used in “Coming Apart” were based on the 2000 census. The data used here are from the aggregated American Community Surveys from 2010 to 2014.

The short answer to my most basic question is that higher socioeconomic statuses are associated with lower bubble quiz scores (that is, thicker bubbles). For the 41,033 cases with full data, the correlation between the score and the percentile of the current ZIP code was –.28. The inverse correlation with the percentile of the ZIP code at age 10 was even stronger: –.38. But that’s not nearly the whole story. The circles in the graph below show the mean score for each percentile of socioeconomic status. The statistically fitted curves highlight the overall trends. 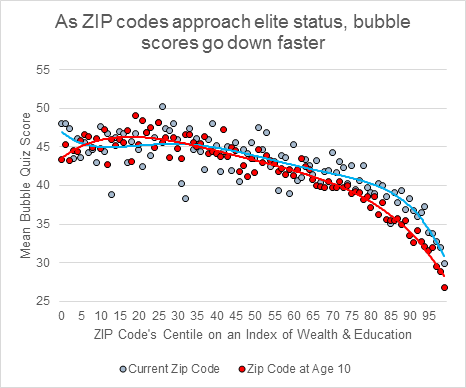 The sample sizes are large enough to have some confidence that this drop-off at the top of the socioeconomic status range is real. Almost 12,000 of the bubble quiz scores were registered by people who are now living in ZIP codes in the top socioeconomic status decile, and more than 9,000 of them are from people who lived in such ZIP codes at age 10.
READ MORE: Why economic anxiety is driving working class voters to ‘Trumpism’

The more important point is that the top few percentiles are crucial for understanding our divided cultures. By definition, a country of 322 million people has 6.44 million people in the top two percentiles of socioeconomic status. Those people in the top few percentiles include almost all of those who run the nation’s culture, economy and politics. What happens when we focus in on them? What happens when we look at the difference between the effects of growing up in an elite ZIP code and the effects of living in one as an adult? What about people who have lived in such ZIP codes all their lives? The graph doesn’t give us much in the way of answers, but it raises all sorts of intriguing questions. More soon.