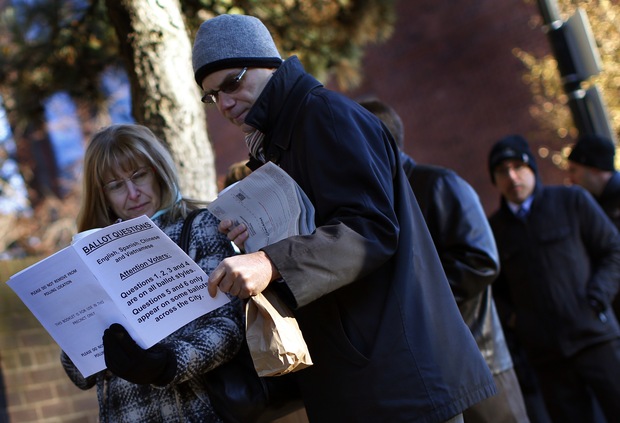 Fuller employment may reduce your tendency to vote in non-presidential contests. Above, voters in Boston, Massachusetts, look over ballot questions while waiting in line to vote in 2012. Photo courtesy of Mike Segar/Reuters.

With the United States narrowly missing debt default, and GOP approval ratings at rock bottom during the 16-day shutdown, talk of the town naturally shifted to this question: is it possible that Republicans could lose the House in 2014?

But if there’s one thing we learned from the 2012 election, it’s that what matters most in elections may be voter turnout. We’ve heard a lot about the effects of turnout, but two economics professors have taken a step back to ask: what affects turnout? In a recently published paper in the American Economic Journal of Applied Economics, Kerwin Kofe Charles of the University of Chicago and Melvin Stephens of the University of Michigan approach the question from an economics angle: How do changes in the labor market affect turnout?

What they report is surprising, if not counterintuitive, and they’re the first to admit it: higher local wages and employment are associated with lower voter turnout at the senatorial, congressional, gubernatorial and state legislative levels. They also found higher levels of “roll-off” (when voters don’t cast votes for races lower down on the same ballot) where wages and employment were higher.

Who Made Money on the Presidential Prediction Markets and Who Lost

Maybe the explanation is what you might call logistical. People who live in economically healthy counties are probably working; they’re busy and can’t get to the polls. But really, the authors asked, how hard is it to vote? That explanation didn’t satisfy them either.

Over four years of research, tying local economic circumstances to voting habits didn’t seem to explain much. Because of education, for example, the kinds of people who are well employed may be more inclined to vote anyway. The effects Charles and Stephens saw could therefore have been confounded by other factors.

So the authors looked for local economic shocks, mainly from variations in prices of local commodities like oil and gas, that would significantly affect regional earnings and the labor market. Comparing labor market data and voter turnout across counties from 1969 to 2000, they found that people living in counties where commodity prices soared, for example, turned out at lower levels for all elections, except presidential elections. This led the authors to a new hypothesis.

To understand it, think about the midterm elections next year. Americans will have multiple candidates to choose from for each elected office. But the ability to enter the voting booth armed with a sense of who each candidate is and what they stand for, and then to recognize on the ballot the name of the candidate you want, takes a certain level of political awareness. Cultivating that knowledge takes time — time working folk don’t have.

So the hypothesis they devised is counterintuitive at yet another level: employment has a negative effect on political knowledge. Looking at American National Election Survey political awareness assessments (administered by independent assesors to voters over a series of two election cycles), and comparing those evalutations (scored as very low to very high awareness) with changes in individuals’ employment data, Charles and Stephens conclude that those people who are more fully employed just aren’t as informed about elections, except the presidential elections.

The employed have less “leisure” (non-working time, in economics terms) to inform themselves about the candidates and issues. Presidential contests are an aberration because they’re so large-scale, you’d practically have to be living under a rock not to know the candidates. This theory, the authors believe, also explains the higher levels of down-ballot roll-off among more highly employed people: they have even less time to seek out information about local politics.

Charles offered the two of us as an example. “You and I are busy working. You’ve got to finish this assignment by tonight; I’ve got a paper due tomorrow.” The point being that we don’t have time to inform ourselves about the politics that the national media isn’t already bombarding our senses with. “I bet you can’t name your congressman,” Charles asked me. Actually, I could: Rodney Frelinghuysen. “Well, I don’t know mine,” he said.

But wait a minute. Who’s to say, I asked, that people who work less or who are unemployed have more time on their hands? Maybe they’re looking for work (isn’t that a job in itself?) or busy caring for a sick relative. Fair point, Charles said.

But one-third of unemployed people’s awake time is spent watching television, he replied, citing studies from Alan Krueger and Andreas Mueller. And “presuming that TV viewing exposes people to more political information,” Charles and Stephens write in their paper, these people should be better informed.

That’s a pretty big assumption about the educational value of TV, but the authors used broader parameters, only counting someone as “informed” if she or he had consumed information from three of the four sources in ANES’ Media Exposure Index (television, radio, magazines and newspapers).

The way people get their news has changed dramatically since 2000, and arguably, so has electoral politics. So like all social scientists, Charles was cautious about extrapolating his research to our current legislative cycle. He and co-author Stephens went so far in their paper, however, to speculate that political agents may act strategically with their hypothesis in mind: people are more inattentive to politics when times are good. (Friday afternoon news dump, anyone?)

And while they only examined turnout, who gets what share of votes and whether that means a candidate is more popular than another is a different thing entirely. That’s the subject of their current research.

So, after all this, you may ask, why are two economists studying voter turnout and why are we writing about it? Economists always conclude presentations of their own research, Charles explained, with the same sentence: “And this has policy implications.” But it’s only through the political sphere that policy changes. “This question about political agents reacting to things that affect economics ought to be the first order of importance to economists,” Charles told us. And what’s the first order of political activity? Voting.