More African-Americans are going to college than ever before. But according to new research from the Center on Education and the Workforce at Georgetown University, African-American college students are more likely to pursue majors that lead to low-paying jobs, setting up many for future debt and underemployment. And over time these occupational choices contribute to the wealth and opportunity gap between whites and blacks that spans generations.

“Basically, African-Americans have been going to the right church but sitting in the wrong pew,” director Anthony Carnevale said. “In a way they are using education to climb the social and economic ladder, but they’re being steered toward majors that will make them low-earners.”

African-Americans make up only a small percentage of some of the highest-paying of majors, including those in STEM and business. They’re only 8 percent of engineering, 7 percent of mathematics and 5 percent of computer science majors. Worse, Carnevale said even those who do major in high-paying fields, typically choose the lowest paying major within them. For example, the majority of black women in STEM typically study biology, the lowest-paying of the science discipline. Among engineers, most black men study civil engineering, the lowest-paying in that sector. 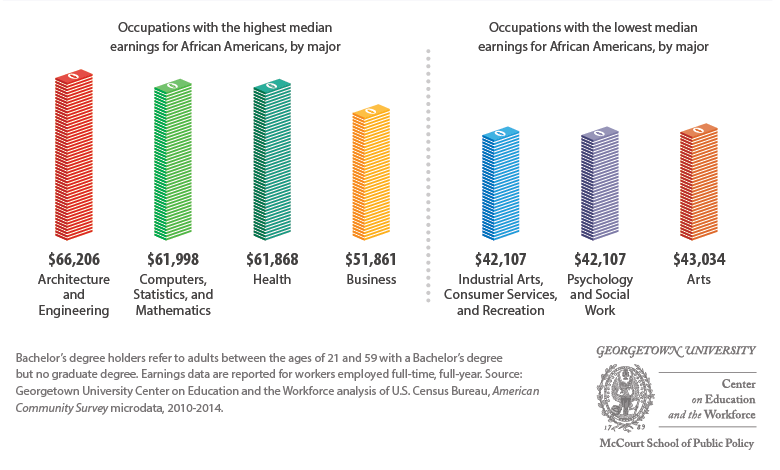 African-American college students tend to have majors in public service which are also some of the country’s lowest-paying. As this chart shows, African-Americans are over-represented in majors that are some of the lowest paying. Image from Center on Education and the Workforce

In contrast, black college students are over-represented in service-oriented fields: humanities, education and social work (shown in the chart below). One of the lowest-paying majors common among African-Americans with a bachelor’s degree is early childhood education and the median earnings is only $38,000 annually compared to $65,000 for computer science (the lowest among high-paying majors for African-Americans). Carnivale says this is largely because American society overall “does not value service-oriented occupations.” 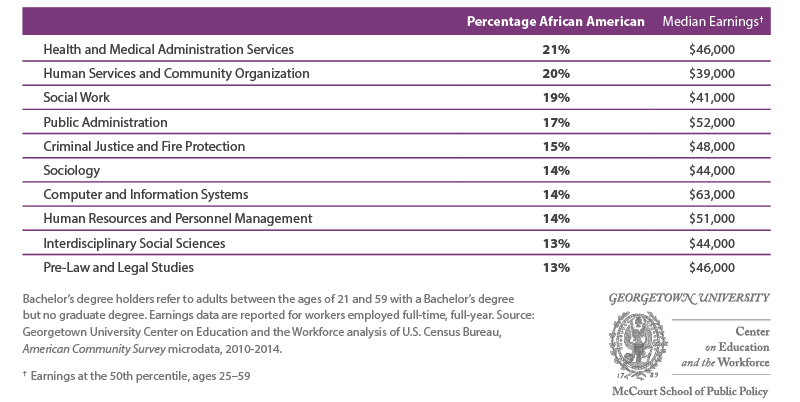 As this chart shows, African-Americans are over-represented in majors that are some of the lowest paying. Image from Center on Education and the Workforce

Another reason for the disparity is merely personal choice. Many service-oriented majors lead to careers that are vital to political and social movements in poor, minority communities around the country. And the study indicates that African-Americans who have strong community-based values enter into college majors that reflect those values. Despite comprising just 12 percent of the population, African-Americans are 20 percent of all community organizers.

The center also points out that the majority of college-educated African-Americans earn their degrees from two-year institutions or open-admission four-year colleges and universities. Seventy percent of African-Americans who graduate from college attended an open-admission school. With a few exceptions, these institutions not only have limited majors and course offerings, but also lack personnel and academic resources for consistent mentorship. Often, the result is a black student being what Carnevale calls “risk adverse,” or shying away from the unfamiliar.

Over time, low-paying majors affect economic prosperity. There’s a $4 million difference in earnings between a four-year degree in early childhood education and petroleum engineering over an entire career. Black students end up with less savings and disposable income paying for educations that landed them low-paying jobs in the first place. It stifles the African-American middle class and contributes to the country’s economic inequality.

So what’s the solution? The Center on Education and the Workforce recommends aggressive counseling of minority students early on, encouraging young African-Americans to develop careers in tech, business and STEM that incorporate elements of community service. Carnevale points out that a black business executive could still be a community advocate by providing jobs and small business loans.

“We don’t want to say education is a bad thing for African-Americans because it’s not,” Carnevale says. “On the other hand, to the extent that choices are limited and experience is limited, the pursuit of their passion needs to be informed. Chasing your dreams shouldn’t turn into a nightmare.”

Left: More African-Americans are earning college degrees than ever before. But a new study shows they're over-represented in majors that lead to low-paying jobs.