LITTLE ROCK, Ark. — In front of the iconic Old Manse, the oldest building in Arkansas constructed solely for the purpose of educating black students, there’s a plaque recounting the rich and poignant history of Arkansas Baptist College.

Founded in 1884 to serve former slaves, the college is in Little Rock’s Central High historic district, named for the nearby public school that was forcibly integrated by federal troops and made famous by the iconic photo of jeering whites hurling vitriol at black children.

“Growing Hope,” read the banners hanging from the metal fence encircling the campus.

Low-income students “have extra needs but they’re attending the institutions least able to put extra resources into meeting those needs.”

Arkansas Baptist is still predominantly black. Most of its students come from families with low incomes, as measured by the number who are eligible to receive federal Pell Grants, designed to help low-income students nationwide earn degrees. In 2011, federal figures show, 201 of its incoming freshmen got Pell Grants, representing some of the more than $325 billion the Congressional Budget Office estimates the government has paid out through that program in the last decade.

But new federal data show that, six years later, none of those students at Arkansas Baptist had graduated. Nor had any other freshmen who received Pell Grants in 2011 to attend 48 other colleges and universities, including taxpayer-subsidized public institutions. At other schools, as few as one in 100 Pell Grant recipients had earned a degree within six years.

In all, only half of U.S. students at four-year universities and colleges who got Pell Grants in 2011 graduated within six years, an analysis of this data by Seton Hall University assistant professor of education Robert Kelchen shows. That compares to nearly 60 percent of all students.

Related: Eligible for financial aid, nearly a million students never get it

At 49 colleges and universities, none of the freshmen who got federal Pell Grants in 2011 had graduated six years later, new federal data show.

The figures provide the first-ever look at the return on taxpayers’ investment in the Pell Grant, the largest single federal financial aid program; this information was never before collectively available, and while individual colleges were required to disclose it if asked, some refused. About 7.5 million students are projected to get Pell Grants this coming academic year, according to the Congressional Budget Office.

The generally low success rate reflects the special challenges that face low-income college students. It also shows the impact of their concentration in the institutions least equipped to help them succeed. Meanwhile, wealthier students predominate at elite private and public flagship universities that have significantly more resources.

“There is some threshold at which there are things that colleges don’t have control over and can’t be accountable for, but if you are consistently leaving more students worse off than when they came to you, that doesn’t seem like a worthwhile investment,” said Jessica Thompson, policy and research director at the advocacy group The Institute for College Access and Success, or TICAS.

“Stuff like this is hard, but there’s no question colleges and universities could be doing better for these students,” Thompson said.

Several policy organizations have urged that institutions be held more accountable for the success of their students who get Pell Grants. 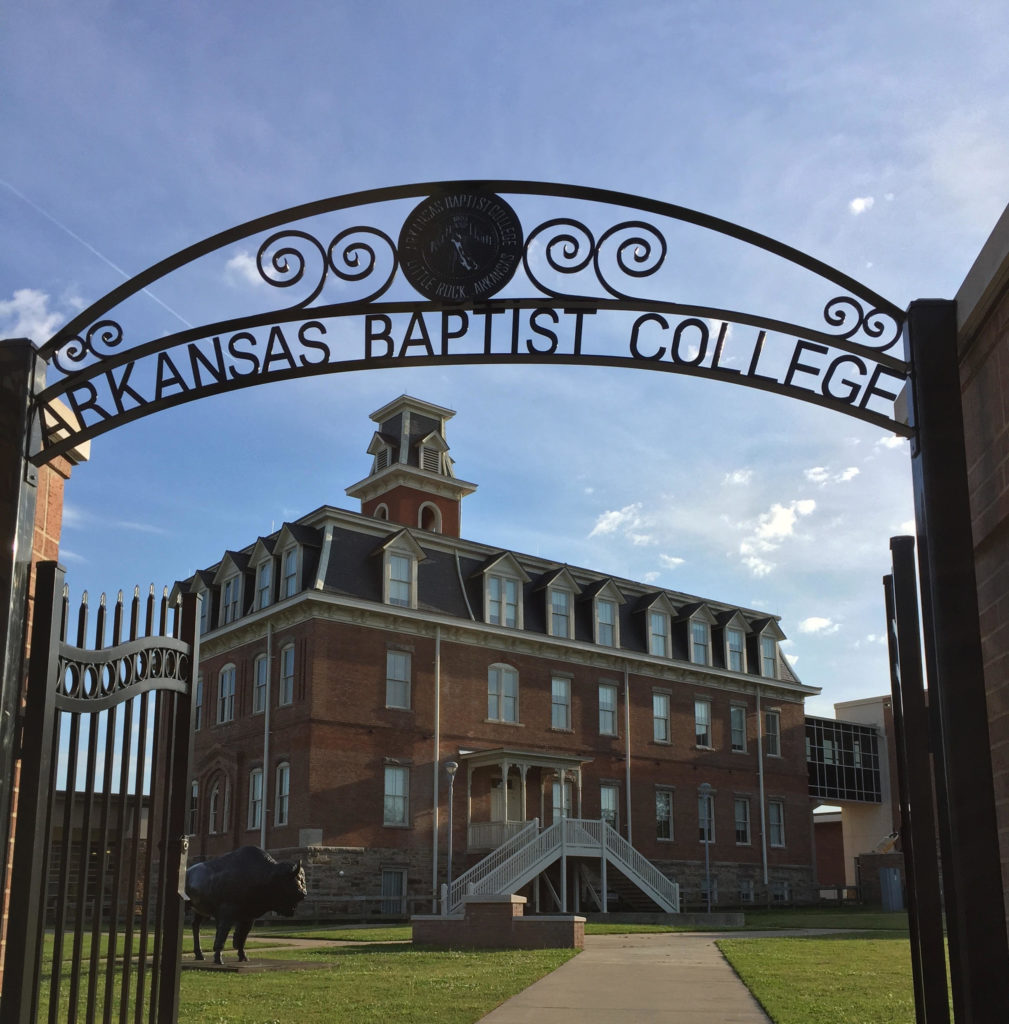 The Old Manse, the centerpiece of Arkansas Baptist College in Little Rock, Arkansas. The college has long served black and low-income students, but federal data show that of the 201 low-income freshmen who began their studies in 2011, none had graduated six years later. Photo: Jon Marcus for The Hechinger Report

The American Enterprise Institute has proposed providing bonuses to universities and colleges for every Pell recipient they graduate. Kelchen has suggested not only giving financial bonuses to institutions if their Pell recipients perform above the average of similar types of students and similar types of universities, but also making institutions pay part of the grants out of their own budgets if they don’t. (That proposal was part of research underwritten by the Lumina Foundation, a funder of The Hechinger Report, which produced this story.)

Because the risk of a penalty could have the unintended consequence of even further discouraging the most selective institutions from accepting low-income students, TICAS has suggested giving bonuses to colleges for every Pell Grant student they enroll.

“Some kind of pressure needs to be placed on colleges and universities to do what they do in a better way,” said James Soto Antony, director of the Higher Education Program at the Harvard Graduate School of Education.

“If failure was not an option,” said Antony, “what kind of financial decisions would we make internally with the way we hire and reward faculty to be more successful with students?”

Pell Grants typically go to the children of families that earn $40,000 or less. Many are racial and ethnic minorities and the first in their families to go to college. Some are parents themselves, work at least part time or have taken time off since graduating from high school.

“These all correlate with higher difficulty getting through college,” Thompson said.

Among the shortcomings of the grants themselves is that they haven’t kept up with college costs. Congress in March increased the maximum award by $175, to $6,095 after years of flat growth, but the Congressional Budget Office says recipients can expect an average of $4,100, and the College Board calculates the grant now covers a record-low 17 percent of tuition and fees at private institutions and 59 percent at public four-year institutions, down from 20 percent and 87 percent two decades ago.

That’s a principal reason why low-income students increasingly end up at the cheapest colleges and universities — usually community colleges and regional public universities. Meanwhile, students with families in the top 1 percent of income are 77 times more likely to go to an Ivy League campus than those from the bottom 20 percent, researchers at Stanford, Brown and elsewhere found.

“If you are consistently leaving more students worse off than when they came to you, that doesn’t seem like a worthwhile investment.”

As state higher education budgets are cut and institutions become more desperate for revenue, this divide is widening: Since the 1990s, nearly two-thirds of selective public universities have reduced the proportion of low-income students they enroll and increased the share of wealthier ones, the foundation New America reports.

It’s not that low-income students can’t handle the work. Among those who are not going to the most elite colleges are tens of thousands with better academic records than the people who do, according to the Georgetown University Center on Education and the Workforce. Some 86,000 low-income students per year score as well as or better than the median score on standardized admission tests of students admitted to elite colleges, the center found.

Community colleges spend an average of $15,134 per year, per full-time student — roughly a quarter as much as the $56,401 per student spent by private, nonprofit universities and colleges, according to the U.S. Department of Education; the figures are for 2015 to 2016, the most recent period available. Four-year public universities also spend less per student than private institutions.

Even the private, nonprofit colleges that take the largest shares of low-income students are comparatively less selective, have smaller endowments and often also struggle to provide support, the New America study found. Arkansas Baptist, for example, has suffered an enrollment slide and budget problems that have forced it to impose staff pay cuts. The college wouldn’t discuss the graduation rates of its students who get Pell Grants.

“Not all but most colleges and universities are not structured in ways that really are responsive to the needs of first-generation, low-income students.”

“A lot of these schools with what appear to be alarmingly low graduation rates, they’re accepting people who already have more academic problems coming in the door,” Antony said. “It’s hard to know who to blame. They don’t have the luxury of turning away applicants with low high school GPAs or low SAT scores.”

All of these factors contribute to the fact that barely one in five students who graduate from high schools where at least three-quarters of the student body are considered low income earn college degrees within even six years, according to the National Student Clearinghouse Research Center.

Many who do enroll end up worse off than they started out, struggling to repay loans they took out to pay for educations they never finished; Pell recipients are nearly twice as likely as other students to borrow, the public-policy organization Demos says.

“Not all but most colleges and universities are not structured in ways that really are responsive to the needs of first-generation, low-income students,” Antony said. “I don’t think they’re going out of their way to say, ‘We’re going to stick it to students and not serve them.’ But maybe that’s the most pernicious thing — that they’re not even consciously thinking about this.”

This story about obstacles for low-income students was originally produced here by The Hechinger Report, a nonprofit, independent news organization focused on inequality and innovation in education. Sign up here for our higher-education newsletter.

Left: Only half of U.S. students at four-year universities and colleges who got Pell Grants in 2011 graduated within six years. Photo by xy/via Adobe