Billions in Pell Grants go to students who never graduate

She was in the second semester of her freshman year at the University of California, Berkeley, when Monica Mata started to worry she might never make it to graduation.

But Mata managed to overcome academic struggles and personal challenges to reach her junior year, and now she’s confident she’ll graduate, thanks in part to help from a federal Pell grant based on her family’s low income.

If she does get to the finish line, she will avoid the fate of a huge proportion of her fellow recipients of federal Pell grants.

A Hechinger Report analysis of Pell grant graduation rate data from a cross section of colleges and universities — which is not otherwise publicly reported anywhere — suggests that billions of dollars in taxpayer-funded Pell grants nationwide go to students who never earn degrees.

And while some schools with large numbers of Pell recipients have strong graduation rates for those students, the ones receiving the biggest share of the money often do not.

The government itself does not collect this data, meaning that, since 2000, taxpayers have spent $300 billion on Pell grants — the nation’s single most expensive education program, awarded based on family earnings to help low-income students get access to higher educations — with no way of knowing how many of the recipients ever actually earned degrees.

In a quirk of federal policy, individual institutions do have to disclose the graduation rates of their students who receive Pell grants, when asked. And while some resisted doing so, or released them only in response to public-record requests, the Hechinger analysis of 32 of the largest private and 50 of the largest public universities — and tens of thousands of Pell grant students — shows that more than a third of Pell recipients at those schools hadn’t earned degrees even after six years. 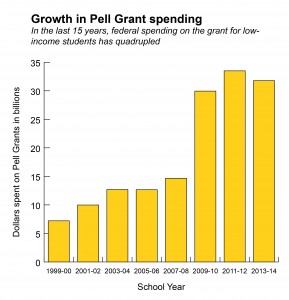 “We’re talking huge amounts of money and huge numbers of people,” said Richard Vedder, an economist and director of the Center for College Affordability and Productivity.

Related: Americans making under $30,000 can already send their children to college for free

Pell grants cost taxpayers $31.4 billion in fiscal year 2015, more than double what was spent on them in 2007. Since then, the maximum award has increased by more than $1,200 per student per year and the number of students applying for the grants is up by 7 million.

The program has grown so fast that Republicans have proposed freezing the maximum annual Pell award at the current $5,775 for the next 10 years. The money given to the students first goes to the college to pay tuition and fees, and anything left over can be used for books and living expenses. Unlike loans, Pell grants do not have to be repaid, whether or not a student ever graduates.

Most recipients of Pell grants come from families earning less than $40,000 a year.

In January 2014, Congress gave the Department of Education 120 days to produce, for the first time, Pell grant graduation rates for every university and college in the country. The department finally released the months-overdue report in November, but did not break down the information by institution, citing problems with the data, and was only able to analyze 70 percent of Pell recipients. Only 39 percent of the 1.7 million students in its sample earned a bachelor’s degree in six years.

But every college should already know Pell grant graduation rates. The 2008 Higher Education Opportunity Act requires them to tell prospective students the graduation rates of Pell recipients if asked, but does not require that they give those figures to the U.S. Department of Education. The federal education data system has no plans to collect the information from schools, and does not enforce the disclosure mandate.

“I don’t think that anybody has checked on whether [the schools] are doing what they’re supposed to be doing. That’s partly why these policies don’t work,” said Andrew Kelly, a resident scholar at the American Enterprise Institute who coauthored a 2011 study that found just a quarter of a randomly selected group of 150 schools provided their Pell grant graduation rates when asked.

When the Hechinger Report asked the nation’s 50 largest public and 50 largest private colleges and universities for the data, several private universities repeatedly ignored the requests; 32 ultimately responded. One, the University of Dayton refused to disclose the figure on the grounds that the request came from a media outlet and not a student.

Several public universities required formal public-records requests; one, the University of Texas at Austin, charged $54 for the information. (Its six-year graduation rate for Pell recipients was 45.4 percent.)

Related: The financial aid policy that shuts out millions of students

Of those schools that did respond, the average six-year graduation rate for all students was 70 percent, higher than the national average of 59 percent. For Pell grant recipients, the graduation rate was 66 percent. The more Pell students an institution enrolls, these statistics show, the lower their likelihood of graduating.

Of the six schools in our sample with more than half of the student body receiving Pell grants, the highest graduation rate for those students in six years was 57 percent, at Georgia State University. By contrast, of the eight schools where Pell students made up only 15 percent of the student body, the lowest graduation rate was 77 percent at the University of Maryland College Park.

There are many reasons students who receive Pell grants never finish. At many universities and colleges, the money doesn’t cover the full cost of tuition, fees, and other expenses, and some students don’t have the resources to pay the rest. Others arrive from low-performing public high schools less well prepared than their higher-income classmates.

Whatever the reason, there’s no central database to consult to know what taxpayers are getting for their $31.4 billion-a-year investment, or for Pell students and their parents to easily compare their likely success at one institution versus another.

At 15 of the 82 colleges and universities studied by Hechinger, Pell recipients graduated at a higher rate than their classmates who did not receive Pell grants, though at only nine of those schools was the difference larger than 1 percentage point.

At Lindenwood University, in Missouri, for instance, 60 percent of Pell Grant students graduated, compared to 45 percent of all students. At Utah’s Weber State University, the Pell graduation rate was 48 percent, five percentage points higher than for the total student body.

The graduation rate alone isn’t enough to know how much federal Pell money is going to students who don’t earn degrees. Calculating that would require knowing the award amounts and how long a student was enrolled before dropping out.

Related: Changing the incentives for colleges to enroll and graduate low-income students

But it would be useful information to have, experts said, particularly for low-income students trying to pick a school where they would be most likely to succeed.

“Right now, there’s not really a way for students to evaluate, ‘How does a student like me do at this institution?’” said Carrie Warick, director of partnerships and policy for the National College Access Network.

She and many others said that if schools are following the disclosure rules required by the Higher Education Opportunity Act, it shouldn’t be difficult to incorporate that number into federal data reporting systems.

“There’s a real concern in Congress about not increasing burden,” Warick said. “This shouldn’t create an additional burden. They’re already supposed to be tracking this information.”

In fact, the National Center for Education Statistics, the branch of the Department of Education that collects and publishes data from colleges, did an internal review of Pell grant graduation rates by institution in 2006 that was not publicly distributed, according to Mark Schneider, who was the commissioner of NCES at the time.

“I was just trying to do a proof of concept,” Schneider said. “I showed it could be done and it could have been done years ago.”

Now a vice president at the American Institutes for Research, Schneider said he still believes that someday these numbers will be published and easily accessible. But while that may be good news for students, not everyone will be happy about it, he said.

“I believe that one of the things that’s going to happen when we get Pell graduation rates,” he said, is that “we’re going to be really, really sorry we have them because they’re going to be so bad.”

Left: In a recent estimate of Pell grant recipients in the U.S., only 39 percent of the 1.7 million students in its sample earned a bachelor’s degree in six years. At UCLA, pictured, that rate is 88 percent. Photo by Al Seib/Los Angeles Times via Getty Images

Sarah Butrymowicz is data editor at the Hechinger Report, covering K-12 education across the country. Her work has appeared in The Washington Post and the Los Angeles Times, as well as on Time.com and NBCNews.com.