Celebrity Calls Urge Students To Get Up, ‘Get Schooled’ 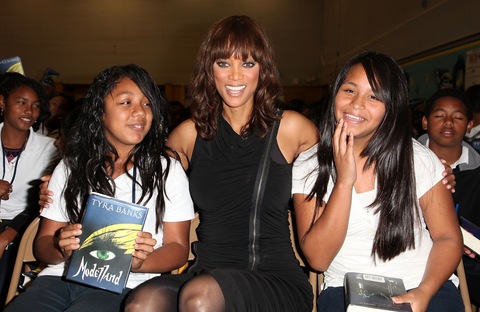 Supermodel Tyra Banks poses with students at Mary McLeod Bethune Middle School in Los Angeles after surprising them with a pep rally as part of the Get Schooled Foundation’s attendance challenge. Photo by Brian To/Getty Images.

A teenager punches the snooze button again and is contemplating skipping class to stay in bed when her cell phone rings. Tyra Banks is on the line telling her to get up, go to school and do what she has to do to graduate.

Pre-recorded robocalls from the likes of Banks, rappers Nicki Minaj and Wiz Khalifa plus many other celebrities are behind an initiative from the Get Schooled Foundation — in partnership with The Bill & Melinda Gates Foundation*, Viacom and other major sponsors — to increase attendance in American high schools. Students and parents can sign up for the twice-weekly wake up calls that, in combination with school-wide attendance challenges and activities rolled out in 90 schools across the nation, encourage teens to get up and get to school.

According to Marie Groark, Executive Director of the Get Schooled Foundation, about one third of all high school students in New York City are absent from school on any given day; she adds that national statistics are difficult to verify but are also, generally, far too high. When she told those statistics to a group of teenagers, they weren’t surprised, but most adults find the poor attendance numbers shocking. Young people, Groark says, were more surprised to learn that missing just five days of school per year can have a significant impact on their academic performance.

“When we looked at it, attendance came right to the forefront as the greatest predictor of high school graduation rates,” Groark said. “If you don’t go to school, you’re not going to graduate.”

Groark calls attendance a “silent epidemic” that often goes unaddressed in favor of encouraging students to get to college or make something of themselves. When they’re only focused on the long view, she says, parents and students don’t think about the importance of just being in school every single day.

The student response to the robocalls has been overwhelmingly positive, according to Groark. Students often react excitedly on social media when they get a call, and Groark says one student even recorded her favorite call to play every morning.

Thanks to @RealWizKhalifa & @getschooled for waking me up this morning! 🙂

@getschooled can I just say that you guys LITERALLY just made my life announcing the next celebrity wake up call?! <3

Adrienne Wallace Chew is principal of Palumbo Academy in Philadelphia, one of three schools being recognized Friday for its attendance achievements through the Get Schooled initiative. The winner of the 2011 challenge, Aki Kurose Middle School in Seattle, will host a school-wide event in January with a surprise celebrity guest. Wallace Chew says the program has helped her students feel like they are part of something bigger than themselves.

“I personally don’t always believe in a lot of incentive to get kids to do things, but I do understand it’s difficult for some of our teens to get out of bed and go to school,” Wallace Chew said. “So I thought, why not? Sounds like fun.”

Wallace Chew adds that the largest attendance gains from the program have come in the ninth grade, a crucial time for students to build a good attendance habits and get integrated into the school culture.

Groark says the public’s response to the Get Schooled Foundation’s initiative has been mostly positive, but she has fielded questions about whether it would be better to allow parents to be responsible for their own students’ attendance instead of relying on celebrities.

“Ideally every parent in America would be reinforcing how important it is to go to school every day, but that’s just not happening,” Groark says in response. “We could sit around and blame the parents, or we could step in and think of creative ways to close the gap. At the end of the day, we can’t have another generation graduate at 67 percent – our kids and our country can’t afford it.”