ASHEVILLE, N.C. — Clare Cameron stood behind a folding table, stacked with zucchinis, peppers, cabbages and cucumbers, and explained the differences between running a farmer’s market and plant conservation genetics, pausing only to bag produce for customers.

Working on a farm and running the weekly market, she has learned to identify food crops and to care for them, she said. A scientist does laboratory research on plants; at the farm, she said she is “on the ground” with them.

Cameron, a senior, is one of about 700 students at Warren Wilson College, a small school tucked into the Appalachian mountains of western North Carolina. Warren Wilson is a federally designated “work college,” one of a handful of schools at which students help pay for their tuition by working — in the case of Warren Wilson, for at least five hours a week.

The work is an integral part of the curriculum at these colleges. Full-time students are required to work to earn degrees, and their work is evaluated by supervisors, making this approach different from optional programs such as work-study or internships.

The few colleges that follow this model, which has been around for a century, are small: None has more than 2,000 students. And they have been laboring, so to speak, in relative obscurity.

Now the idea of a work college is drawing renewed interest, thanks to rising student debt, skepticism about the financial payoff of a liberal arts education and employer complaints that graduates aren’t prepared for jobs. The fact that work colleges get extra funding under a little-known federal program also hasn’t hurt.

Until last year, there were seven work colleges. Then two more joined their ranks, including a historically black institution, the first to be designated a work college. Now another school, Silver Lake College, has announced plans to apply to the federal government for status as a work college.

“Work colleges are a diamond in the rough; they’ve been hidden all this time in plain sight.”

“Work colleges are a diamond in the rough; they’ve been hidden all this time in plain sight,” said Nicholas Hartlep, a professor of urban education at Metropolitan State University in Minnesota and co-editor of “The Neoliberal Agenda and the Student Debt Crisis in U.S. Higher Education.” The book includes a chapter Hartlep helped write, which shows that work college students, on average, graduate with less debt than those at private and public four-year universities.

The newest work colleges are Paul Quinn College, a historically black college in Dallas, which is also the nation’s first urban work college, and Bethany Global University, a Christian missionary school in Bloomington, Minnesota. If approved next year, Silver Lake, in Manitowoc, Wisconsin, would become the first Catholic work college. 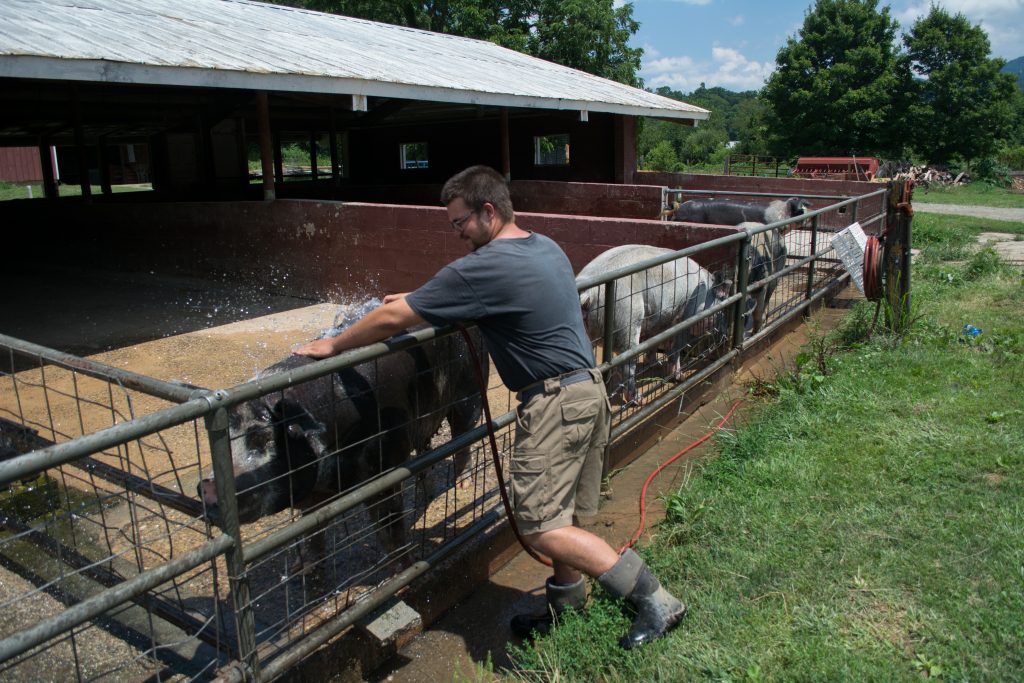 Senior Landon George checks on pigs as they cool off in the mud at on the 275-acre farm at Warren Wilson College. Photo: Jesse Pratt Lopez for The Hechinger Report

Like many historically black colleges, Paul Quinn has struggled to keep up enrollment. In 2009, the school was down to 167 students, according to Nithya Govindasamy, dean of the work program. The number has rebounded to about 500. Govindasamy credits the work college model, at least in part.

“Anecdotally, what students are looking for in colleges like this … is that most want to have a job when it’s done,” Govindasamy said.

Students get a tuition subsidy of $5,000 per year from the work program, a substantial discount off the annual tuition of nearly $14,500. More than three quarters of Paul Quinn students are from low-income families, and receive Pell grants.

But there’s nothing unusual about Paul Quinn students being interested in getting a job after graduating, and in living the rest of their lives without the burden of student debt.

Slightly more than two thirds of work college alumni said in a survey that their alma maters prepared them for their current jobs, compared to 55 percent of private college graduates and 47 percent of public school graduates, according to the Work Colleges Consortium.

Half of all students who quit college do so after their first year, leaving a big problem for tuition-dependent liberal arts colleges in particular. Although Silver Lake’s work program is still too new for its impact on so-called retention rates to be measured, Goff thinks the built-in supervisor-student relationship will help keep students at his school.

“Students are getting a lot more attention from work supervisors, people checking in on a regular basis,” he said. “Relations are a lot deeper, and there’s no student sitting in the background.”

But becoming a work college is not easy.

At 163 years old and with about 1,600 students, Berea College is the oldest and largest work college. President Lyle Roelofs said schools often approach him with interest in developing a work program in order to save money, but find out it’s more complicated than that. For example, they’re not allowed to use students to replace full-time employees. Also, Roelofs said, training supervisors is the “hardest part.”

Students at work colleges borrowed an average of $4,634 per year, versus $7,366 per year for students at private, nonprofit universities and colleges.

Historically, institutions have used those federal funds to help pay for their work programs, said Robin Taffler, executive director of the Work Colleges Consortium. Work colleges also tend to have what she called “leaner” payrolls than typical, more lavishly staffed universities and colleges. 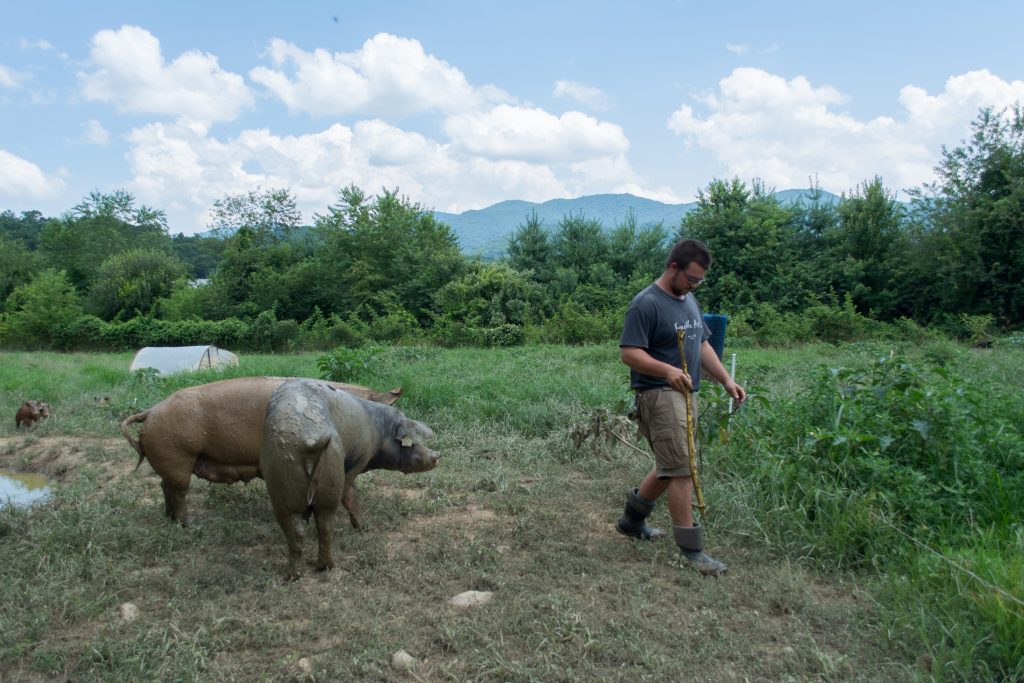 Landon George, a senior at Warren Wilson College, takes care of some of the 200-plus pigs at the college’s commercial farm. Photo: Jesse Pratt Lopez for The Hechinger Report

The work college model is likely to work best at small schools, where it is easier for the supervisor-student relationship to flourish, said Hartlep, who is at work on a book focused on work colleges.

Zui Kumar Reddy, a recent Warren Wilson graduate, underlined the importance of the supervisor-student relationship as she recounted her experience during her work assignment at a mechanic’s garage. The assignment included restoring a 40-year-old motor.

“I was having a miserable time in my first year of college, being far from home and having difficulties with my life,” said Reddy, who is from Bangalore, India. Describing her supervisor, she said, “This 6-foot-4 white guy would tell everyone he was my father.” She referred to him as “my best friend.”

Sitting nearby, Cathy Kramer, vice president for applied learning, said a survey showed that 75 percent of Warren Wilson students decided to stay at the school because of the work program.

“Higher education has been pushing outcomes for the last decade — ‘What is the student getting out of this?’” said Lynn Morton, the college’s president. She noted that some schools have attained outcomes such as an entrée into the workforce through “experiential leaning,” more commonly known as co-op programs. “Work colleges have been doing this all along.”