Next time you go to your kitchen, take a look at the food in the pantry and the fridge. There’s probably a popular cereal, perhaps a brand-name soda or frozen food in the freezer, the commercials for which have played over and over on TV. These are examples of “environmental print” and they are often some of the first words children learn.

“Because it’s the print that they see, that’s the first thing that they are able to read,” said Lori Espinoza, a teacher at Rice University’s Oral and Written Language Laboratory (O.W.L. Lab) inside the Gabriela Mistral Center for Early Childhood in Houston, Texas. “That may not be intentionally placed there for children to read, but it’s there.”

Researchers have repeatedly found environmental print plays a large role in the literacy development of young children, and that is why it is increasingly being used as a teaching tool. Espinoza uses it in her classroom and with her 3-year-old daughter Rachel when they’re in the car.

“She’s very aware of print,” Espinoza said. “She might see ‘Toys R Us,’ [and] she’ll start to spell it. I start to describe what’s inside and then we can start talking about what kind of toys do you want to play with, what should we do when we get home and those sort of things. It’s kind of the entré for a conversation. I’ve already got her hooked because she wants to know about that.” 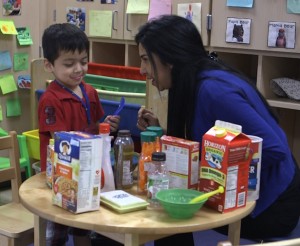 Teacher Lori Espinoza (right) uses environmental print in her classroom at the Gabriela Mistral Center for Early Childhood in Houston to help children with their language skills. Photo by Mike Fritz/PBS NewsHour

There are opportunities to use environmental print at home as well, with newspapers, magazines or advertising that comes by mail, according to Espinoza. It’s one of the many lessons she models for her students’ parents when they visit the classroom.

“This kind of lesson is just one of many shared with parents at the O.W.L. Lab, encouraging them to use everyday activities to improve vocabulary and literacy,” said Debbie Paz, associate director for Early Literacy and Bilingual Programs at Rice University’s School of Literacy and Culture. Paz spends several days each week at the lab helping refine the program and introduce the curriculum to teachers from around the Houston Independent School District.

“I think bringing everyday life scenarios into the classroom for the parents gives them a way to kind of work on those sorts of things.” said Paz. “Talking to the parents and saying, ‘When you go to the grocery store, these are some things that you might want to talk about with your child.’”

“We have parents that work two or three jobs. They are not able to spend a lot of time with their children in many cases. But the time that they do spend, whether it’s riding in the car, whether it’s you know going to the park, whatever, it is to make that a time when language is happening for them.”