Colleges and businesses team up to fill demand for skilled workers

DENVER — David Andy went to college after graduating from high school, spent his first two semesters drifting through introductory classes, then had to pick a major.

That was when he had an unfortunate epiphany: He had no idea what he was doing there.

“I just didn’t like anything,” said Andy. “Nothing stood out to me.” He didn’t know what he’d do with, say, a degree in English. “There was no end goal for that.”

So he quit school and went to work at a factory, rising up the ranks to journeyman. Before long, he was running two departments. Then he hit another roadblock.

Andy, 29, is now enrolled at Metropolitan State University in Denver in an unusual program designed to provide him with the precise degree he needs for a career in advanced manufacturing.

It brings together university and employers, with labs crammed with equipment recommended and often contributed by industry partners. With corporate logos covering the walls, the building is so new that construction workers are still putting on the finishing touches. 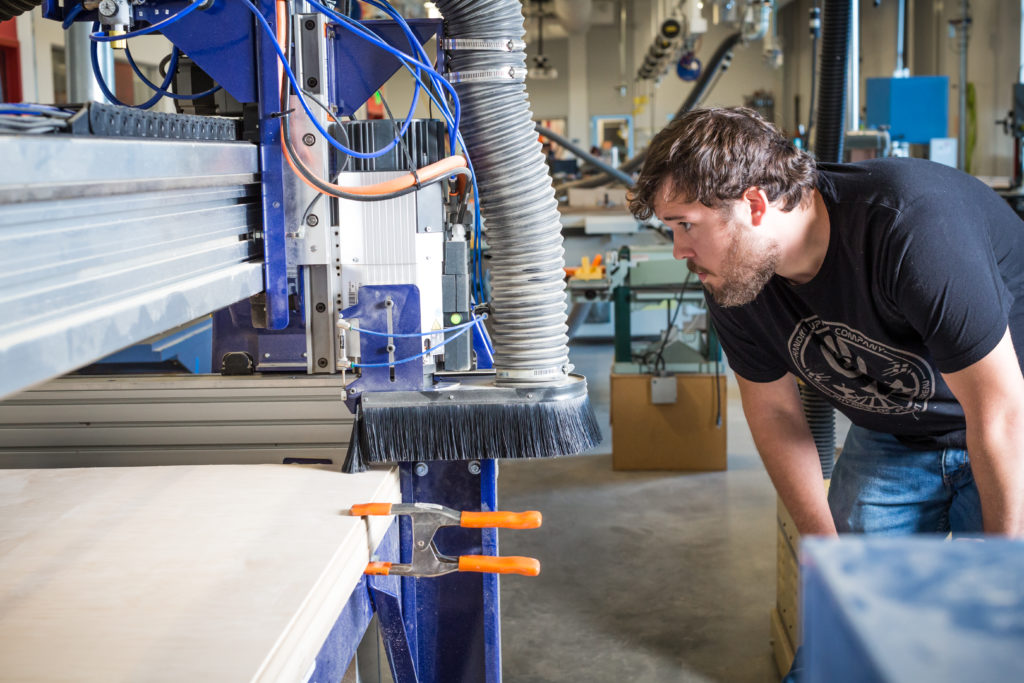 David Andy, who is enrolled in a program in advanced manufacturing at Metro State University in Denver designed in collaboration with employers. Photo by Jake Holschuh for The Hechinger Report

The $60-million collaboration is meant to help solve the confounding disconnect between what colleges teach and what graduates need to know to fill jobs that are sitting empty in some of the nation’s fastest-growing industries.

And Colorado has become a test case for ways to close that gap. There the unemployment rate is 2.7 percent, the third-lowest in the country, and employers say they’re turning away business because they can’t find workers with the right skills.

It uses labor-market data from sources such as LinkedIn to track and share what skills are in the most demand in a fast-changing economy.

It pushes apprenticeships for students who are still in high school, giving them experience not only on state-of-the-art automated factory floors but in the offices of banks and insurance companies.

Colorado, where the unemployment rate is 2.7 percent and employers say they can’t find trained workers, has become a test case for ways to close the skills gap.

It encourages employers to come up with detailed job descriptions, rather than just listing the credentials they want applicants to have — such as bachelor’s degrees that have often proved poor measures of whether workers are career-ready.

And it’s brought together businesses with universities to connect those degrees more directly with what students need to know for work.

If he had seen this kind of payoff to a university degree, said Andy, “I wouldn’t have bailed” on his first try at a higher education.

The fact that it’s unusual for universities to think about their graduates’ employability may come as a forehead-slapping surprise to students. But while these conversations have occasionally happened among community colleges and neighboring businesses or when public institutions are prodded by lawmakers, they’re only now beginning to occur on a scale as large as what’s happening in Colorado, driven by frustration on all sides. 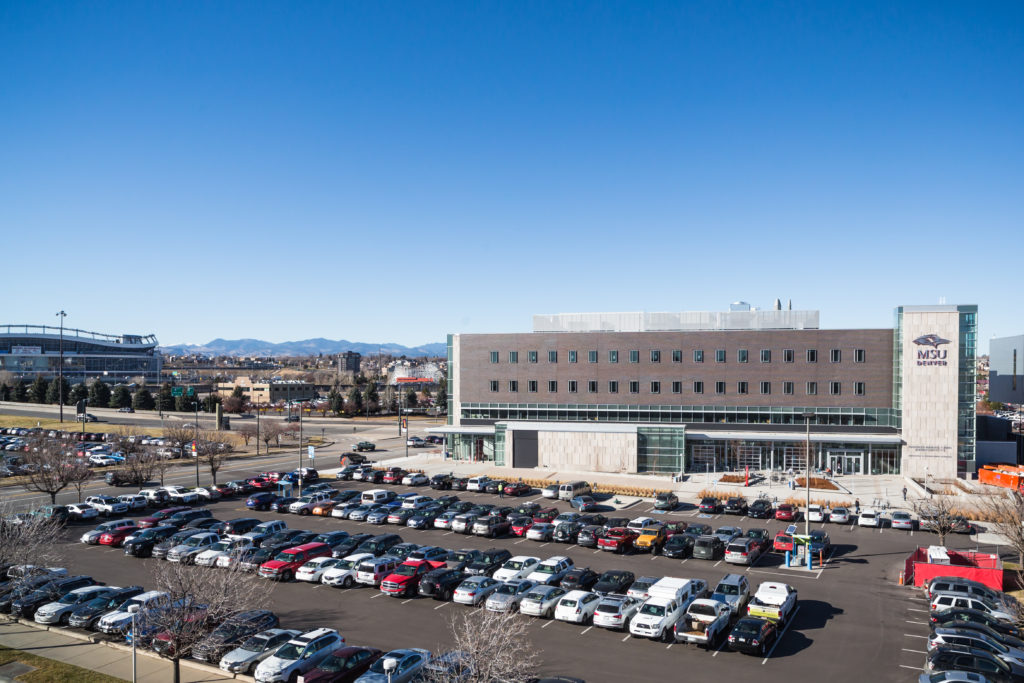 “For so long we’ve used a degree as a proxy for employability, but it doesn’t work that way anymore,” said Noel Ginsburg, CEO of a plastics and medical-equipment manufacturing company and founder of a statewide apprenticeship and job-training program called CareerWise Colorado. “Education changes slowly and what’s happening out here in a factory or in an office is moving at the speed of light.”

That reality has driven technology companies such as Microsoft to create their own online courses in data and computer science, impatient with the pace at which universities and colleges can do it.

Ginsburg, a Democratic candidate for governor running largely on a platform of training a skilled workforce, said he once asked an administrator at a public university why it wasn’t trying to compete with high-priced, wildly popular so-called bootcamps that teach people how to code.

“He buried his head in his hands and said, ‘The culture is, we don’t really think in those terms.’” It would take two years for his university to set up a program like that, the administrator told him, and “by that time, the codes have changed. They never can catch up. It’s a cultural thing in education where you have a process that worked in the 1930s, but it doesn’t work today.”

READ MORE: How to save the humanities? Make them a requirement toward a business degree

This complaint is getting less and less pushback these days from universities and colleges. Contending with a punishing decline in enrollment and growing public skepticism about families’ return on their investment in tuition, higher education is increasingly seeking, rather than resisting, partnerships with business.

For example, a standing-room-only crowd of educators, government officials and employers piled into a daylong summit in December at the Federal Reserve Bank in the heart of Boston’s financial district. The event was organized by the New England Board of Higher Education with a goal that also seemed obvious: to come up with ways to “increase the career readiness of graduates” of colleges and universities.

“We heard employers saying, ‘We need grads who can hit the ground running,” said Gloria Larson, president of Bentley University and one of the speakers. Bootcamps and other “disruptors,” said Worcester Polytechnic Institute President Laurie Leshin, “are making us think about things differently.”

Apprenticeships are also getting fresh attention as an alternative to going to college. More than 74 occupations, from tax preparation to graphic design, could be filled by people trained solely through apprenticeships, according to a new study by the Harvard Business School Project on Managing the Future of Work and Burning Glass Technologies, a software company that analyzes job data.

There remain opposing voices. Some faculty critics, for example, worry that collaborating with employers will transform their work from academic to vocational — that there will remain no room in the curriculum for such things as humanities courses that have been shown to teach such skills as critical thinking and problem solving, which businesses say they also want.

But students also clearly expect to learn job skills. Eighty-five percent of freshmen in an annual survey said they went to college to improve their employment prospects.

Already, demand from students for degrees they think are more closely connected to work has pushed down the number majoring in the humanities from a high of nearly one in five in the late 1960s, to one in 20, according to the American Academy of Arts & Sciences. 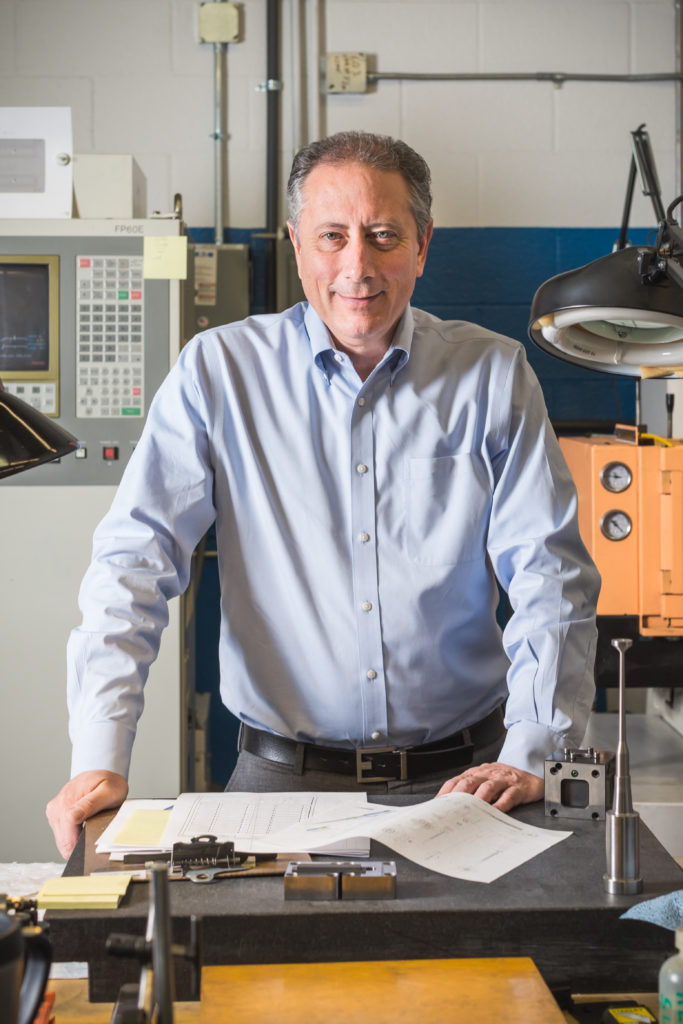 Noel Ginsburg is the CEO of a plastics and medical-equipment manufacturing company, founder of an apprenticeship program called CareerWise Colorado, and a Democratic candidate for governor who is running largely on a platform of training a skilled workforce. Photo by Jake Holschuh for The Hechinger Report

“There will always be pockets of resistance, no matter where you are. But on the whole there was an openness to participate in this,” said Robert Park, director of Metro State’s Advanced Manufacturing Sciences Institute.

That doesn’t mean that pairing faculty with industry is easy.

“There tends to be a significant amount of inertia in academic institutions in general,” Park said. “And being responsive to industry’s needs is not necessarily a top priority for conventional or traditional academic programs.”

Nor are employers necessarily equipped for this.

“Business and industry tends to sit on the sidelines as an observer and then as a critic when they don’t get what they want,” said Ginsburg, in a Denver conference room overlooking the 24-hour-a-day manufacturing plant of his company, Intertech Medical.

In the bright, clean room webbed with pipes and wires, workers in lab coats, gloves and hairnets were inspecting tiny plastic parts coming off fully automated assembly lines that moved inexorably by themselves.

“Businesses have to think about their role and that is as big of a challenge, I think, as universities changing,” Ginsburg said.

In Colorado, at least, employers have begun that work.

“They have to do this,” said Beth Cobert, who as former acting director of the U.S. Office of Personnel Management oversaw millions of federal employees and who is now CEO of Skillful, another effort to bring together colleges and corporations. Colorado has “a terrific economy and growing demand. So from employers’ point of view, there’s a willingness to try new things.”

“Education changes slowly and what’s happening out here in a factory or in an office is moving at the speed of light.”

Francisco Hansen has already benefitted from that. He just graduated from Metro State with a degree in astrodynamics and aerospace operations after interning with a satellite company that has an office right on campus.

Hansen mapped out his own education with input from faculty and industry advisors. He said his department chairman told him, “‘This is what employers are looking for, so we need to include these classes in your degree.'”

The result, said Hansen: His education “was tailored for what I want to do, rather than, ‘It’s just the way we’ve taught this stuff for 30 years.’”

Skillful, which is underwritten by the New York-based Markle Foundation and so far operates only in Colorado, will soon expand into more states — though the foundation won’t say which ones.

“The real goal,” said Andi Rugg, its Denver-based executive director, “is that the system itself begins to change.”

Left: Francisco Hansen, who mapped out his own degree in astrodynamics and aerospace operations from Metro State University in Denver with input from faculty and industry advisors, and interned for an aerospace company with facilities right on campus. Photo by Jake Holschuh for The Hechinger Report