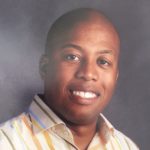 Column: How one military veteran teaches his students about Memorial Day

Memorial Day is a federal holiday that honors the men and women who died while serving in the U.S. military. After graduating from West Point in 2002 and serving more than five years on active duty as a field artillery officer, Demetrius Ball decided to teach.

Ball is now a high school social studies teacher in Maryland’s Howard County Public School System. He hopes that by sharing a little about what life was like in the military, his students might further understand the meaning of Memorial Day.

From a pretty young age I knew that I wanted to become a teacher, but without any connection to the military, I never imagined that I’d also become a soldier.

At the end of my junior year of high school, my football coach asked me if I had considered applying to the military academies. My response at the time was: “What’s a military academy?”

Well, I found out what an academy was — as a football recruit. Once I received my appointment to West Point, I realized that it was an opportunity that I couldn’t pass up.

Before entering West Point, I had no idea what Memorial Day or Veterans Day was really all about. It was not until I experienced life on deployment did I truly understand what both represent. Now, as an educator, I feel it is my responsibility to make sure that my students do not leave high school without understanding the meaning of these two important days.

I spent four years at West Point as a cadet and football player and upon graduation was commissioned as a second lieutenant in the field artillery. I entered the academy with the mindset that I could possibly retire from the Army, and all that experience would truly prepare me for school leadership. I served for five years on active duty before pursuing a career in education. I actually saw my role as an officer as a “real world” teacher of sorts.

We have school on Veterans Day, so my first year teaching I decided to put together a presentation titled “A Soldier’s Experience.” I take an entire class period to share my military experience with my students. The last few years I have worn my Dress Blue or Green uniform. I discuss the difficult transition that I had adapting to life as a cadet, like struggling to qualify on the range with an M16 rifle, not feeling prepared for the academic rigor, and even failing my first class ever.

I also share the fun that I had as an Army football player, and unfortunately being on the last team that beat Navy (2001). I barely made it onto the field as a running back. That 2001 game against Navy was my first time touching the football in a game and this may sound strange, but I learned to love my role as a scout team player in practice. 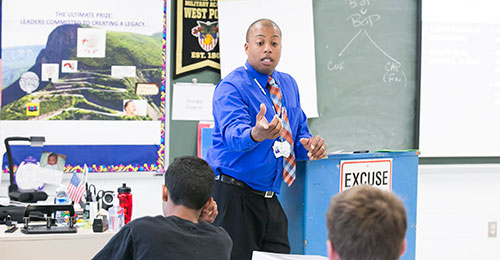 I describe my job as a field artillery officer, and the variety of missions I conducted on deployment in Iraq from January 2004 to February 2005. I take questions throughout the presentation, and without fail, the first question often asked is, “Mr. Ball, did you kill anyone?”

The first time I heard this question I was hesitant to answer, but I knew it would come up again. I always say that our unit was responsible for firing a lot of artillery rounds at “something” and leave it at that.

The second question is usually, “Did anyone you know die?” When that question is asked I am able to tell my students about the brave members of West Point’s Class of 2002 that served our country with distinction and have passed away.

“I think of all the men and women who served with energy, bravery and commitment, and gave their lives for the freedoms we enjoy. Including the freedom to teach and learn.” –Demetrius Ball
My mind goes back to one specific day on my tour in Iraq in 2004, which I don’t usually share in as much detail as I will here. In our field artillery role, we provided direct support to troops on the ground making direct contact with the enemy, and indirect fire support in response to rocket attacks on our Forward Operating Base (FOB).

We also patrolled a neighborhood in Baghdad, trained an Iraqi National Guard unit and provided security for a government compound in the city as well. On a couple occasions, we acted as our unit’s Quick Reaction Force, which meant that if there was an incident in our sector and additional support was needed, the force was sent out to help.

On one occasion we got the call that one of our engineer units had been attacked by an improvised explosive device. There was word that there were casualties, but there were no details provided over the radio. When we got there, we found a very chaotic scene.

The explosive had been detonated right next to the engineer’s three-vehicle convoy on a crowded highway overpass, killing two soldiers, injuring several others, destroying one armored vehicle and blowing a hole through the overpass. The injured soldiers had been evacuated, but we had to recover the remains of the soldiers who had passed away. The sights, sounds and smells of that day are etched in my mind to this day.

When we acknowledge Veterans Day, and Memorial Day, especially, I think of all the men and women who served with energy, bravery and commitment, and gave their lives for the freedoms we enjoy. Including the freedom to teach and learn.

Demetrius Ball deployed to Iraq in January 2004 - February 2005, and Kuwait in November 2005 - October 2007. He left the army in November 2007 and got his first teaching position in July 2008. Ball teaches high school social studies in Howard County Public School System.