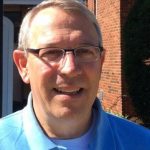 Column: Teaching students to appreciate a world of religions and resist intolerance

Social studies teacher George G. Coe teaches a world religions’ elective at West Potomac High School in Fairfax County, Virginia. Here Coe discusses the importance of students learning world religions in order to reduce intolerance, including their foundations and how they are currently practiced. Coe’s class also participates in Generation Global, a nonprofit British-based organization that holds video conferences with students from around the world on social issues in which students of different religions play a role.

To hear more from Coe about using technology in the classroom and teaching world religions, listen to the accompanying PBS NewsHour Teachers’ Lounge podcast hosted by Victoria Pasquantonio and produced by Adelyn Baxter.

Events like the closing of schools in Virginia’s Augusta County over a world history lesson about Islam in 2015, or the common misconception that Sikhs are Muslims, illustrate the importance of teaching religion in public schools — and some of the controversies that come with it.

While I have not run into such challenges in my world religions elective class, I have run into them in my world history class, where we also cover the different religions, a requirement under Virginia State law.

In this case, the parent of one my students challenged the legality of teaching about Hinduism in public school. He insisted that I had no right and threatened to go to the school board with a formal complaint. My principal and assistant principal eventually met with the parent and explained public schools have a constitutional right to teach about religion.

There are some challenges in teaching about religion in public schools as outlined in Linda K. Wertheimer’s book “Faith Ed.”, including the mistaken belief that doing so is in violation of the First Amendment’s separation of church and state clause. In fact, most school districts across the country require students to learn about the world’s religions.

Teaching students about religion can reduce intolerance and bigotry and help develop global citizens. However, I believe that students must learn more than the basic historical features of each religion. Students should learn how the religions are lived and practiced today. Site visits, films and even literature can help students appreciate how different religions are practiced.

Many students have never seen a religious site outside of their own or engaged in meaningful discussion with students of other faiths and cultures.

In my world religions elective class, we discuss current issues involving religion and examine the two religion clauses of the First Amendment. Some of these issues provide a good springboard for discussion and debate and they remind students of the extent that religion is embedded in our culture. Can an Arapaho Native American use eagle feathers in a spiritual ceremony even though bald eagles are endangered? Can Abercrombie & Fitch deny a Muslim teenager a sales job because she wears a headscarf? Should a private business, like a bakery, be forced to cater a gay wedding if it does not want to because of religious beliefs?

One of the best ways for students to learn how the different faiths are practiced is to take them on field trips to different places of worship. Last year, for example, I took students to one of the largest Hindu temples on the East Coast in Lanham, Maryland. We met on an October Saturday morning, during a Hindu festival. Students got to see some of the different gods that Hindus worship and to witness the activity of a real temple service. My students were most surprised by the statues of the different gods and by the offering of food to them.

My students also toured the Diyanet Center of America, also in Lanham, Maryland. It is a huge new Turkish mosque that includes a bathhouse, a fellowship hall, an underground sports complex and a beautiful mosque. My students were amazed by the size of the complex and the intricate use of calligraphy inside the mosque. One freshman who came on the tour was so impressed that she gave a presentation about her visit to her world history class when they covered Islam. 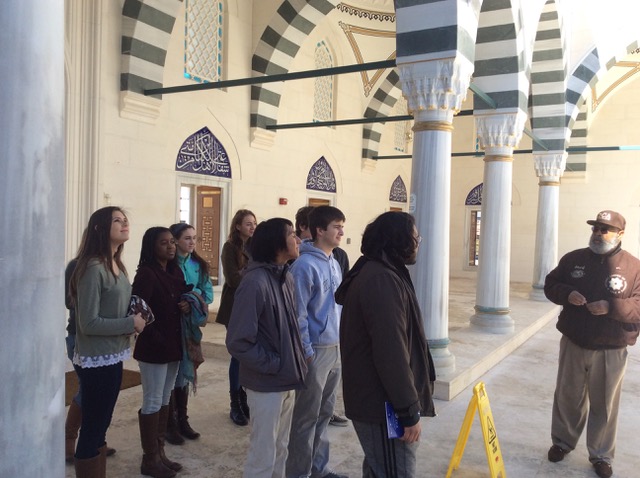 As part of their world religions class, students from West Potomac High School in Fairfax County, Virginia, take a field trip to Diyanet Center of America, which features a Turkish-style mosque, in Lanham, Maryland. Photo by George G. Coe

Finally, students can gain even more knowledge by talking to peers of other faiths and cultures. Generation Global, founded by former British Prime Minister Tony Blair, helps facilitate video conferences for students from different countries to engage with one another on cultural and religious topics, including festivals, the environment, and wealth and poverty.

This year my students in Virginia took part in a Generation Global video conference about hate speech with students from the Ukraine. Students in both countries seemed eager to speak, perhaps because of the prevalence of hate speech as a topic in the news.

Kristen Looney, a project director at the Newseum Religious Freedom Center, spoke to students and reminded them that hate speech is protected by the First Amendment no matter how offensive. My students were not surprised at Looney’s remarks. We had discussed hate speech in class several times by examining specific cases, including hate speech in Myanmar that Buddhist nationalist groups direct at Rohingya Muslims.

Teaching about the world’s religions helps students to develop empathy. Seeing a mosque or Hindu temple, or talking to an Indonesian Muslim helps students develop an understanding for people with different beliefs and allows them to see where connections exist, key skills for an increasingly multicultural world.

Many students have never seen a religious site outside of their own, or engaged in meaningful discussion with students of other faiths and cultures. Stephen Prothero, professor of religion at Boston University and the author of “God is Not One,” argues that a basic understanding of world religions is a matter of “urgent citizenship.”

I agree with both Prothero and would add that an understanding of the different religions can go a long way toward creating global citizens.

Left: A world religions class from West Potomac High School in Fairfax County, Virginia, takes a field trip to a Hindu temple, Sri Siva Vishnu, in Lanham, Maryland. The students received bananas because they were given out as offering for deities. Photo courtesy of George G. Coe

George G. Coe is a history teacher at West Potomac High School in Virginia's Fairfax County. Coe, now in his 16th year teaching, had a career in sales for a printing company before switching careers. Coe writes a world religions and a world history blog for high school teachers.