Column: This little known site is the birthplace of the student civil rights movement

Editor’s Note: The location of what is considered “the student birthplace of the Civil Rights Movement” may surprise some people. Robert Russa Moton Museum, or just Moton, is located in a small town in southern Virginia. Moton recently commemorated the 65th anniversary of the 1951 Moton Student Strike. A few years after the strike, Moton High provided three-fourths of the plaintiffs in the 1954 Brown v. Board of Education school desegregation case.

Jeff Feinstein, a U.S. history teacher at West Potomac High School in Alexandria, Virginia, took his students to Moton to introduce them to a civil rights event even adults have forgotten about or perhaps have never heard of.

Is equality still a core American value? That’s the question I posed to my U.S. History students on a field trip last week before entering Robert Russa Moton High School in Farmville, Virginia.

Moton High was an unremarkable example of the system of racially segregated schools that developed after the Civil War. It was the county’s school for African American students. The school was in Farmville, Virginia, a three-hour drive from where I teach in northern Virginia.

Students at schools like Moton were subjected to an appalling level of deprivation because white school leaders there assumed that Moton graduates would go no further than becoming sharecroppers or maids. Moton, for example, was built to accommodate 180 students but grew to more than 400. It had no gym, cafeteria or athletic field. The roof leaked. Its students shared one microscope and one bathroom. To accommodate the overcrowding, the school district built tar-paper shacks that had no plumbing and were heated with wooden stoves.

But something unthinkable happened at Moton. Before Rosa Parks refused to move her seat, before Dr. King articulated his dream, and before John Lewis led a march over the Edmund Pettus Bridge, 16-year-old junior Barbara Rose Johns on April 23, 1951 led her classmates on a walkout and strike to protest those conditions. 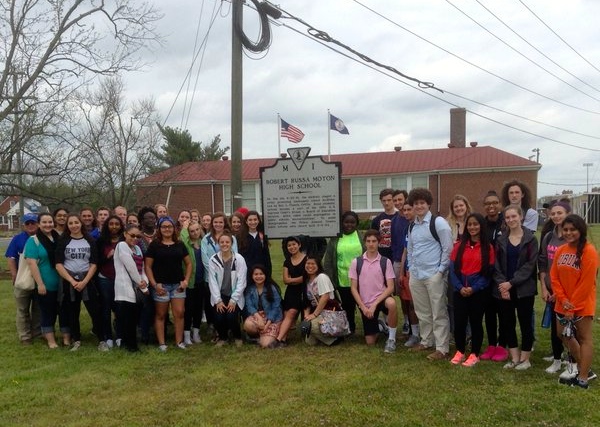 Rose then interested NAACP lawyers in their plight, and her case was later joined with four other cases in the Supreme Court. Collectively the Supreme Court’s 1954 decision was named for one of the other cases, so history calls the case that declared the practice of racially segregated schools unconstitutional Brown v. Board of Education. Thus the Moton student walkout was pushed off the history pages.

“Has America lived up to its founding principles? That’s the question posed by our Moton visit.” — Teacher Jeff Feinstein
My students are using this history to consider broader contemporary questions about race relations posed by the Moton walkout. For example, are the racially-charged incidents that helped launch and fuel the Black Lives Matter movement accidental aberrations or expression of an underlying hostility to Jefferson’s “self-evident” truths? Do the prejudices that informed the racial attitudes of southern school officials in the 1950s equate with modern charges of racism leveled against police departments in cities like Ferguson and Chicago today?

This year my teaching colleagues and I decided to take our students to the Moton Museum. Frankly, our students didn’t know what to expect when we arrived there, just one day before the 65th anniversary of the walkout. The American and Virginia flags were flying outside the building, and the first thing we did was to have a student lead us in reciting the pledge of allegiance. What was missing from that pledge, I asked? When students answered “equality,” I told them that what happened in the building behind them helped put equality into public education.

Our tour started with a short video telling the story of the 1951 student strike. We watched it in the actual auditorium where the strike had been launched. Clearly moved, our students applauded spontaneously when the movie ended. 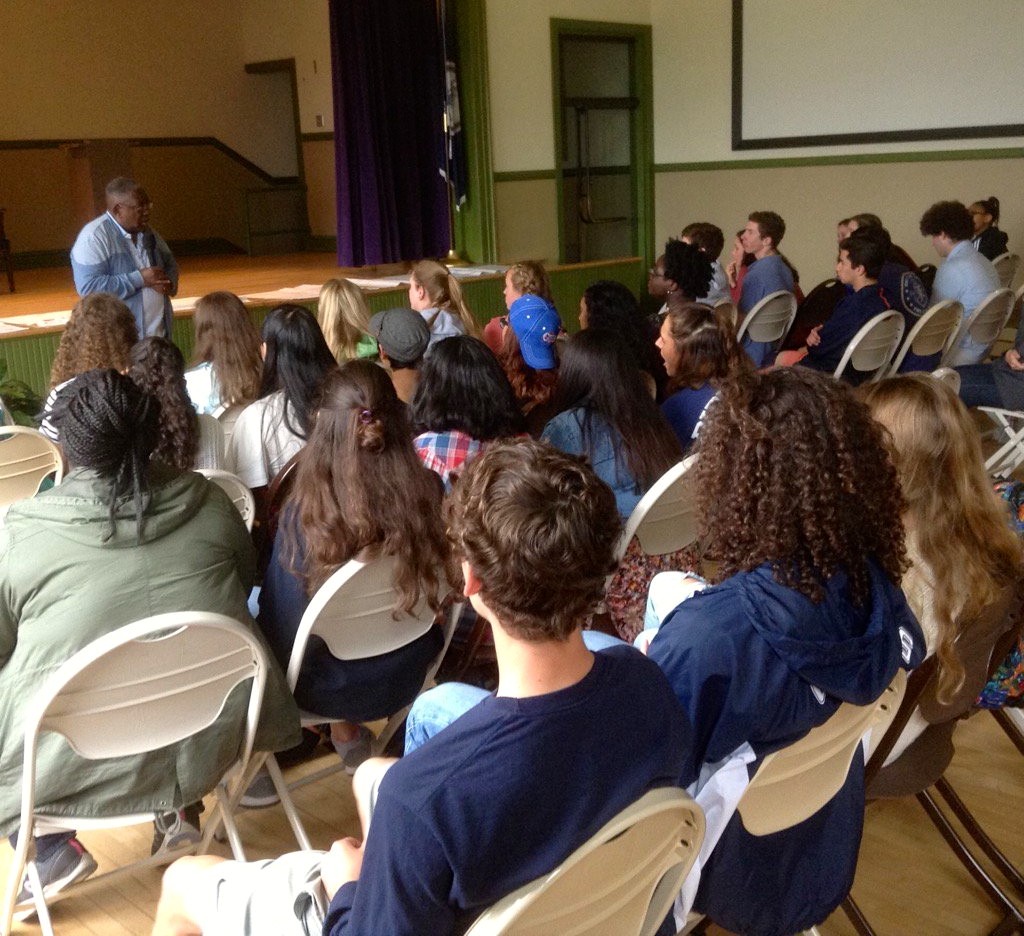 Charles Taylor describes the Jim Crow conditions he grew up with as a Farmville resident and Moton student. Photo courtesy of Jeff Feinstein

Later, an elderly former resident of that county (a man too young for the strike but who still grew up in the segregated South) spoke of the oppressions of segregation and the racial code African-Americans were expected to follow, under threat of “the [lynching] tree.” Our students lined up to shake his hand after his talk; many offered him a hug. When I talked to him after the students had left he had tears streaming down one side of his face.

One student told me he thought that the trip was so important that it should be required. Another student didn’t want to leave, and wrote that the Moton visit “opened my eyes. [Barbara Johns] was just our age when she fought for something she believed in.” Another wrote that “I live in my middle class home with college educated parents, while people of my grandfather’s generation would be told that they should be taught in places that looked suitable for farm animals. The importance of this landmark is completely unbelievable.”

Has America lived up to its founding principles? That’s the question posed by our Moton visit. Based on the student reaction, this was the most impactful lesson we taught all year. And yes, we have already started making plans for a return visit next year.