In a conservative corner of Arkansas, schools focus on success for immigrants

In that moment, Resendiz, 23, understood that language was only one barrier among many for the hundreds of families who had recently come to Rogers from other countries.

Host to Walmart’s world headquarters, a cluster of chicken-processing plants and a growing local economy, northwest Arkansas has gained a reputation as a place where new immigrants can get jobs.

With the influx of workers from Mexico and Central America, the Rogers school district has become 44 percent Latino, up from 31 percent, in the last decade. Of its 15,000 public school students, the percentage of those who aren’t fluent in English has grown to 35 percent from 25 percent over the same period. And because the jobs attracting so many people are mostly low wage, the number of students living near the poverty line has more than doubled since 2000.

Yet in this deeply conservative corner of Arkansas —where no Democrat has been elected to Congress since 1966 — whites have not fled the public schools. The schools have welcomed and integrated the wave of immigrants, legal and undocumented alike — and graduation rates have soared, for all students.

But it didn’t happen overnight, and the work is far from done. 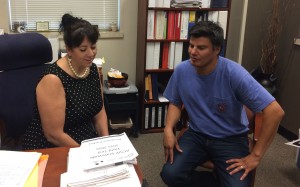 This sprawling 256-square-mile district of rolling hills, with three high schools and 15 elementary schools, encompasses both paint-peeling trailer homes and the gated and guarded community of Pinnacle, whose mansions have as many rooms as some hotels.

“Our mission is to create an environment where all belong, all learn and all succeed,” said Rogers’ veteran school superintendent, Janie Darr, in a slow, subtle Southern drawl. “We really do mean all.”

It’s a far cry from 1995, when the Office of Civil Rights found Rogers’ school district out of compliance because it had no certified teachers of English for Speakers of Other Languages (ESOL). It was also teaching more than 500 Latino students in a separate “academy.” The district began to take steps to address the problems, but a decade later, progress was limited.

“People look for silver bullets, but I promise you it’s not one thing — it’s changing the culture in a building,” said Charles Lee, the principal of Rogers High School, which has about 2,100 students. “It takes time and patience and hard work.”

That same year, when a new high school, Rogers Heritage, opened to accommodate the booming student population, the separate academy was abolished and the English language learners were integrated into the main high schools. A priority was put on hiring bilingual teachers and front office workers. Students new to this country were given a special advisor to help them.

Bilingual juniors and seniors were paired with freshmen and sophomores who weren’t fluent in English. The high schools began to celebrate Hispanic Heritage month, replete with a school-wide dance called Latino Sabor, which now sometimes rivals homecoming in popularity.

The Latino student coordinators encouraged the newcomers to get involved in school activities, like soccer, student council and choir.

“In clubs and sports you really don’t have groups, you just mesh together,” said Heritage junior Javier Hernandez, 16, who runs track.

The Latino student leadership group also urged the school to involve their parents.

“Many of the Hispanic parents were scared to come to the school, they were reluctant, they were intimidated, they didn’t know how to communicate,” said Lee. “We had to work to break down some of those barriers.”

In addition to translating all school materials into Spanish, the schools formed PADRES, which stands for Parents Advancing Readiness for Educational Studies (and means “parents” in Spanish). A couple dozen parents usually gather on Friday evenings at each high school to discuss anything from college scholarships to signs of teenage drug use.

“My kids know I’m here, I know what’s going on, I know what their grades are,” said Sergio Almaraz, a father of four who was born in Mexico. “I learn about college, and I can give them advice. It makes a big difference.”

While embracing families helped, administrators also knew that they had to challenge their students more academically.

In 2009, Rogers joined a statewide initiative to increase the number of students taking AP exams. The district dropped most barriers to enrolling in AP classes (such as teacher recommendations and summer academic work) and opened classes to any student willing to try. Staff counseled more students to take the plunge. Teachers received training on how to support those who needed extra help.

Last year, 1,303 students in Rogers took AP classes, almost double the number in 2008, and 39 percent passed the AP exams, compared with a 32 percent pass rate in the state.

Teachers acknowledge that AP pass rates have dropped since they opened up access, but argue that scores are not all that matters.

“Our scores did go down, but I prefer that to them not taking the classes,” said Heritage AP Literature teacher Kristie Daut. “They may not get the qualifying score, but they’re getting the college prep … they’re in there with everyone who wants to go to college, and they’re being pushed.”

The district also took a new approach to grading and homework.

Teachers were encouraged to stop failing students solely for missing too many homework assignments. They tried to weed out which homework was “busy work” and which actually advanced learning. Some ESOL teachers stopped giving extensive homework and focused on completing the work in class, which aided students who were working long hours after school and on weekends.

“Students don’t lose interest in school, they lose hope,” said Robert Moore, the district’s assistant superintendent for secondary education, who came to Rogers as a teacher in 2006. “Grades cannot reflect behavior, they must reflect learning.”

After the changes, the number of failing grades at Rogers High dropped almost 50 percent in the first semester of 2014-15.

“If a student can demonstrate knowledge, then is it important for him to do all the odd-numbered problems in the back of the math book?” said Moore, who was named state high school principal of the year in 2012.

Rather than lowering the bar, as some teachers had feared, the district’s “grade inflation rate,” calculated by the state, was under 4 percent last year — about half Arkansas’ average. And all Rogers students began to do better on statewide tests, as well.

That fact may help explain why there hasn’t been more opposition to the integration of Latino students, even as anti-immigrant groups have been active in Arkansas. The reforms in Rogers improved instruction for all students, and didn’t carry much of a price tag. In 2011, Arkansas started holding school districts accountable for graduating all students within four years, and Rogers’ rates for English language learners (64 percent) and Latino students (72 percent) were bringing the overall number down (79 percent). Now, Rogers’ two main high schools rank among the top five in Arkansas, which wouldn’t have been possible if English language learners had been left behind.

Also, the area’s three main employers – Walmart, J.B. Hunt and Tyson – all rely on low-wage immigrant workers and seek to attract top talent in their corporate offices, regardless of country of origin. Bilingual workers are a plus, both for entry-level jobs and for those that require a college degree.

Still, when it comes to attending college, the gap between Latinos and whites remains substantial. About 27 percent of English language learners enrolled in college last year; overall, 41 percent of Latinos and 62 percent of whites did. And most students don’t consider options beyond the University of Arkansas or the local community college.

That may be because each high school guidance counselor has a caseload of about 450 students and, while there is a scholarship coordinator, there is no dedicated college counselor to help students complete applications and find the right fit. Rogers’ leaders said their next hurdle is to find funding for a more robust college guidance program.

And work at the other end of the school spectrum is vital, too, they said.

“I can’t emphasize enough the importance of the quality of our K-through-5 schools,” said Moore. “We are getting a better-prepared group of students every year.”

Most of the elementary schools with large numbers of English language learners now require their teachers to go through a state-endorsed ESOL training program.

Rogers is also working to improve the diversity of its school staff at all levels. Almost all of the district’s administrative leadership council and principals are white. The school board is all white (a Latina candidate who ran in September for an open seat was handily defeated). While most teachers are white, a private grant helped the district hire nine Latino teachers this year.

Teachers emphasize that hiring Latino staff is important so that all students have a diverse array of role models. They also say that for the students to be confident and successful, it’s important to affirm their own culture.

“You’re not subpar because you emigrated, you’re not ‘less than.’ You’ve got something special,” said Marsha Walker, who teaches Spanish at Heritage High.

She added that, 20 years ago, most of the school viewed ESL students as the responsibility of ESL teachers.

“Now we don’t have that at all,” she said. “There is an attitude that everyone is included.”

This story was written by The Hechinger Report, a nonprofit, independent news organization focused on inequality and innovation in education. Read more about reforming high schools.