Denver strike ends with teacher raises of up to 11 percent

DENVER — Denver school administrators and the city’s striking teachers reached a tentative deal Thursday to end a three-day educator walkout with a contract agreement that gives teachers raises of 7 to 11 percent, built-in cost-of-living increases and opportunities for future salary hikes.

The key sticking point of variable bonuses for teachers working in tougher environments will be studied to determine if they help retain teachers in schools, the teachers’ union said.

The deal was reached after negotiations that went through the night and it was announced shortly before schools opened Thursday morning. Superintendent Susana Cordova and teacher union president Henry Roman hugging after signing it. Teachers were encouraged to return to their classrooms if they felt ready, even though the deal awaits ratification by the full union membership.

“Denver’s kids are the biggest winners in today’s agreement.”

More than half the district’s teachers went on strike Monday after negotiations over pay broke down.

Democrat Gov. Jared Polis, whose administration declined to use its power to block the strike, praised the deal though he said he wished it had been reached before a walkout.

“Denver’s kids are the biggest winners in today’s agreement,” he said.

The teachers had demanded that the school system should rely less on bonuses for educators in high-poverty and high-priority schools.

The district gives bonuses to teachers who work in schools with students from low-income families, in schools that are designated high priority or in positions that are considered hard to staff, such as special education or speech language pathology. It sees the bonuses as key to boosting the academic performance of poor and minority students. 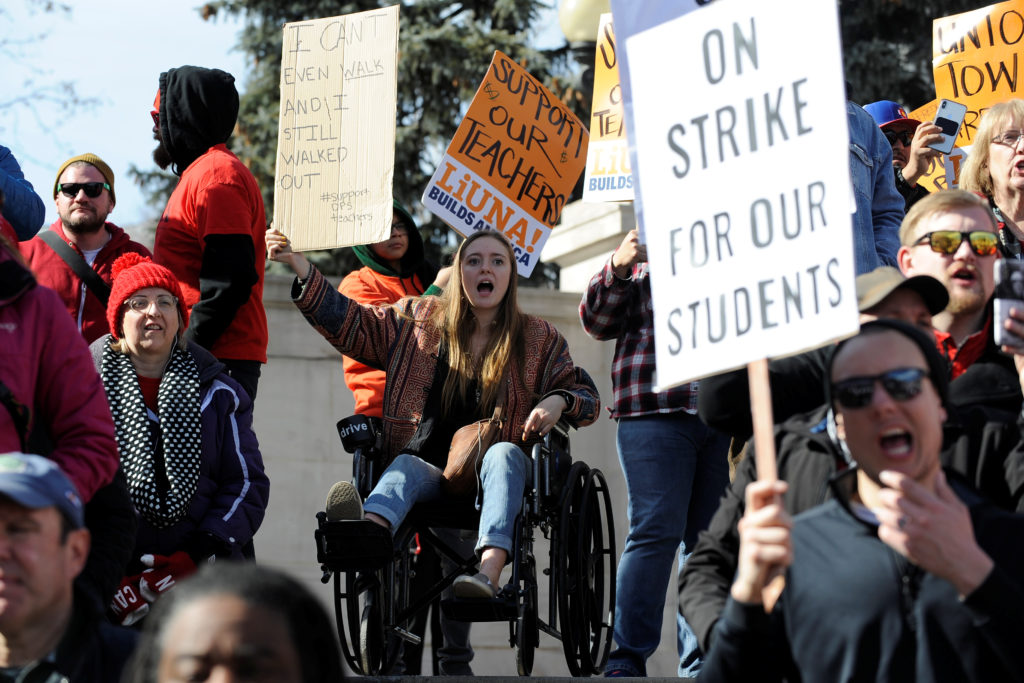 Teachers on the bargaining team said bonuses alone will not keep their colleagues at high-poverty and other priority schools, pointing to district data that showed a variety of teacher retention rates at those locations.

Teachers have said the reliance on bonuses leads to high turnover, which they say hurts students, and that spending money on smaller class sizes and adding support staff, like counselors, is the best way to help disadvantaged students.

Cordova said she wants to have similar conversations about Denver’s schools with teachers “all the time.”

“Truthfully, there is so much that we agree on,” she said.

The district said some of the extra money being put into teacher pay will come from cutting about 150 jobs in the district’s central office and eliminating performance bonuses for staffers in the office.

The walkout came about a year after West Virginia teachers launched the national “Red4Ed” movement with a nine-day strike in which they won 5 percent pay raises. Most recently, Los Angeles teachers held a six-day strike last month.

In Denver, there are 71,000 students in district-run schools. Another 21,000 are enrolled in charter schools that were unaffected by the strike.