NASHVILLE — On the day after Donald Trump was elected president, Jacob Maldonado sat in a Chipotle restaurant with his best friend, Maria Campos, and wondered aloud.

“Is it worth it?” asked Maldonado, who had been working days and studying nights to get through Trevecca Nazarene University, where both were juniors.

Hashtag #undocugrad began trending on Twitter as DACA students in robes and mortarboards shared photos of tearful joy and hugs.

They knew the political winds were shifting; they might not make it to graduation before the new administration ended Deferred Action for Childhood Arrivals, or DACA, the status that protected them from deportation and gave them access to driver’s licenses and work permits that, in turn, helped make it possible for them to pay for college.

“I just don’t know,” answered Campos. And they cried together.

Eighteen months later, Maldonado, now 22, walked across the stage at Boone Convocation Center, where the small, private college’s graduation had been moved from the outdoors due to a steady drizzle over Nashville.

That same day, the hashtag #undocugrad began trending on Twitter all over the country as DACA students and in robes and mortarboards shared photos of tearful joy and hugs.

READ MORE: What some colleges are quietly doing to help undocumented students

Not only have these DACA students persevered to graduate from college; as the school year comes to an end, signs have emerged that still more will enroll and many already there will stay. This despite the DACA program’s precarious future, teetering between President Donald Trump’s threats to shut it down and federal court decisions that have so far blocked him.

DACA students also face further obstacles being put in front of them by state legislatures, presidential tweets and congressional inaction, said Laura Emiko Soltis, executive director of Freedom University, an Atlanta school that offers free college-level courses to students who are undocumented immigrants, most of them DACA recipients. 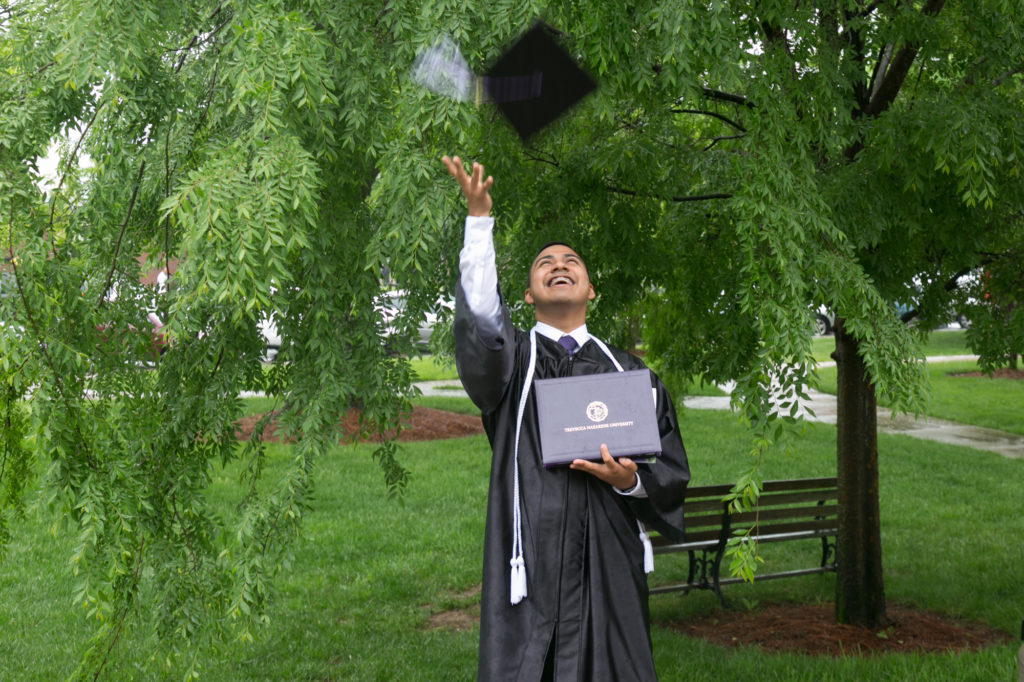 Jacob Maldonado, DACA student, tosses his mortarboard in the air after graduating from Trevecca Nazarene University. Photo by Jesse Pratt López for The Hechinger Report

“They realize this may be their one shot, and they’ve worked too hard and come too far to give up,” said Molly Haynes, executive director of Equal Chance for Education, or ECE, a Tennessee organization that gives scholarships to students with DACA or TPS, another temporary legal status.

Many private groups like that have popped up to help the so-called Dreamers. Maldonado got financial support toward his business degree from ECE. Applications to the program “are through the roof,” doubling from 152 to about 300 in the last year, said Haynes.

“They realize this may be their one shot, and they’ve worked too hard and come too far to give up.”

Vanessa Delgado also received her diploma from Trevecca Nazarene in early May. Now 21, she was brought by her family from Guatemala to the United States when she was 2 and has lived since then in Nashville. To get to graduation, she worked all four years, sometimes in two jobs, and, like Maldonado, got financial help from the university and from ECE.

She said there were times she felt like giving up after Trump took office. But then she would recall, “I was raised to believe that education and knowledge were things that no one can take away from you, and that would lead to your dreams coming true. I believed that, and I still do.” 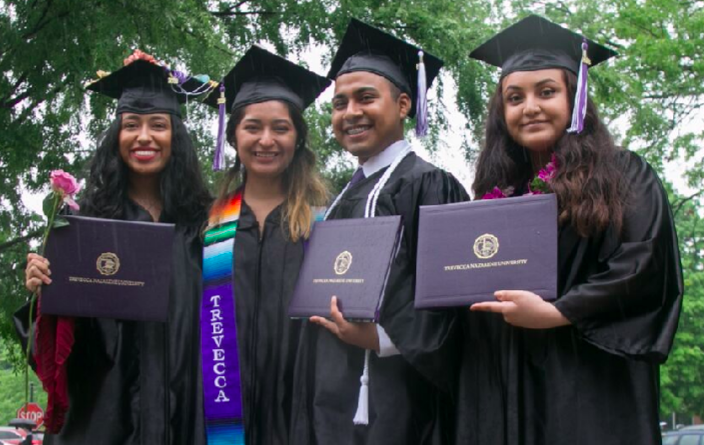 At TheDream.US, which says it is the largest national organization offering scholarships to DACA and other students living in the country without legal permission, about 12,000 started applications for a round of funding that ended in March, up from around 9,000 the year before — a 29 percent increase, and far higher than the 7,000 applications of the year before that.

Among the many hurdles faced by DACA students, one of the biggest is financial. Not only are they ineligible for federal loans or grants; 32 states — including Georgia, and, most recently, Arizona — have passed laws forcing DACA students to pay higher out-of-state tuition at public universities and colleges, even if they’re in-state residents.

Private funders have responded by raising money to help students with DACA status pay for college. Amazon CEO Jeff Bezos, for example, donated $33 million to TheDream.US in January, four months after Trump announced plans to end the DACA program. ECE has nearly doubled its budget in the last year, from $1.2 million to $2.3 million.

“I was raised to believe that education and knowledge were things that no one can take away from you, and that would lead to your dreams coming true.”

An anonymous donor renewed a commitment to help fund the education of 20 DACA freshmen per year for the next four years at Christian Brothers University in Memphis, said Anne Kenworthy, vice president of enrollment management. And this spring, Soltis’ small program of several dozen students saw its highest number of students win full scholarships to college.

Meanwhile, those already in college are staying, often at higher rates than their U.S.-citizen counterparts. Recently arrived from a visit to Chicago schools with TheDream.US scholarship students, Candy Marshall, the organization’s president, said 100 percent of DACA students at Arrupe College of Loyola University stayed in school from freshman to sophomore years, and 94 percent at National Louis University. For the 3,000 or so students TheDream.US has already funded, the figure is also 94 percent. That’s more than 30 percentage points higher than the national average for their classmates.

Continued enrollment, persistence and graduation sum up what is known about DACA recipients from surveys and studies taken during the program’s seven-year history. Nearly two-thirds said they pursued educational opportunities they otherwise wouldn’t have, according to the most recent national survey. Seventy-two percent were pursuing a bachelor’s degree or higher. DACA recipients 25 and older also hold bachelor’s degrees in higher percentages than their peers: 27.3 percent, according to the same survey, versus 21.3 percent in the general population. 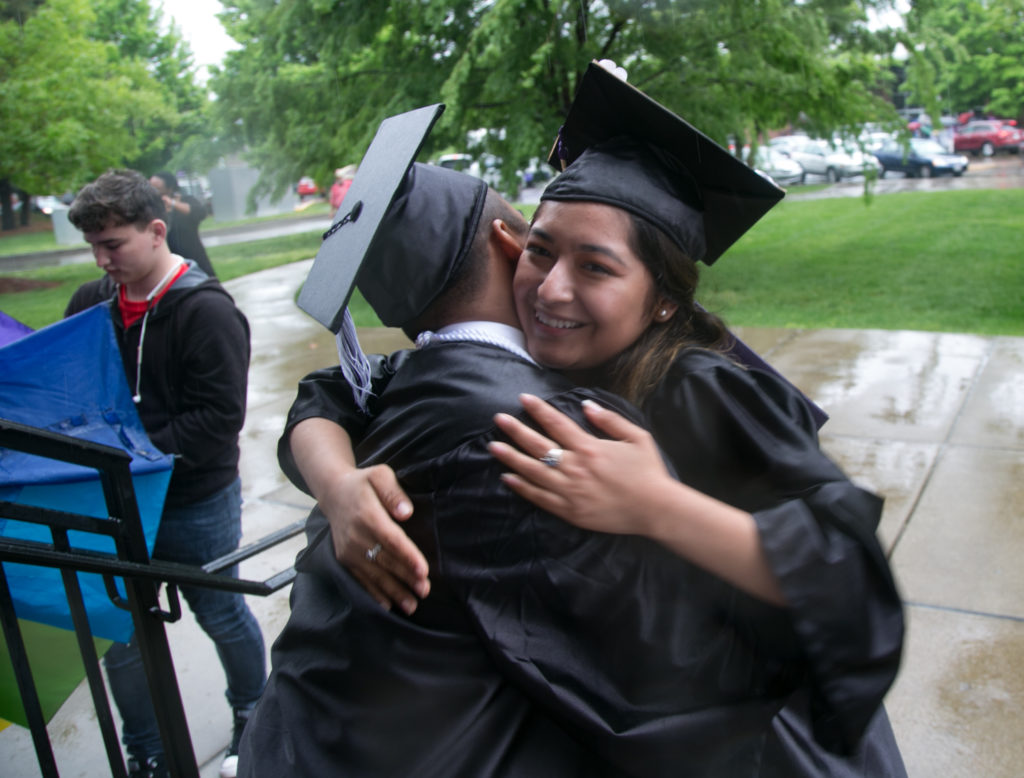 At the same time, schools and organizations nationwide say persisting has come at a cost for DACA students, especially in terms of mental health. On top of the usual stress of academic deadlines, they’re worried not only about DACA going away, but about their parents being deported, said Miriam Feldblum, executive director of the Presidents’ Alliance, a group of 340 college and university leaders from 38 states and Washington, D.C. who support undocumented students in higher education.

Many of the schools in the alliance are finding ways to expand mental health services with limited budgets by using professional volunteers from the community or social work graduate students. “The increased anxiety can’t be underestimated,” said Feldblum.

Maldonado spent his graduation day in May celebrating with his family and friends. He was happy, he said, to be “crossing the finish line.” Next, he’s applying to Belmont University College of Law, in Nashville, which he said he plans on finishing, “with DACA or not.”

Left: Jacob Maldonado and Maria Campos, friends and DACA recipients, on their graduation day. Photo by Jesse Pratt López for The Hechinger Report