WASHINGTON — The Education Department says it is weighing whether to allow states to use federal funds to purchase guns for schools, prompting a storm of criticism from Democratic lawmakers and educators.

If approved, the plan would likely generate a lot of controversy at a time when a string of especially deadly school shootings earlier this year led to the rise of a powerful student-led gun control movement.

A senior Trump administration official told The Associated Press on Thursday that the agency is reviewing legislation governing federal academic enrichment grants to see if the money can be used to buy firearms.

The official, who spoke on condition of anonymity because the person was not authorized to discuss the issue publicly, said the bipartisan Every Student Success Act, passed in 2015, does not expressly prohibit or allow the use of Student Support and Academic Enrichment Grants for the purchase of firearms. The official said the agency received several letters asking it to clarify what those funds could be used for and began researching the issue.

Education Secretary Betsy DeVos, who chairs a federal commission on school safety, has previously said that schools should have the option to arm teachers. The commission, formed in the aftermath of the school shooting in Parkland, Florida, that killed 17 people, has been criticized for omitting the topic of gun control. 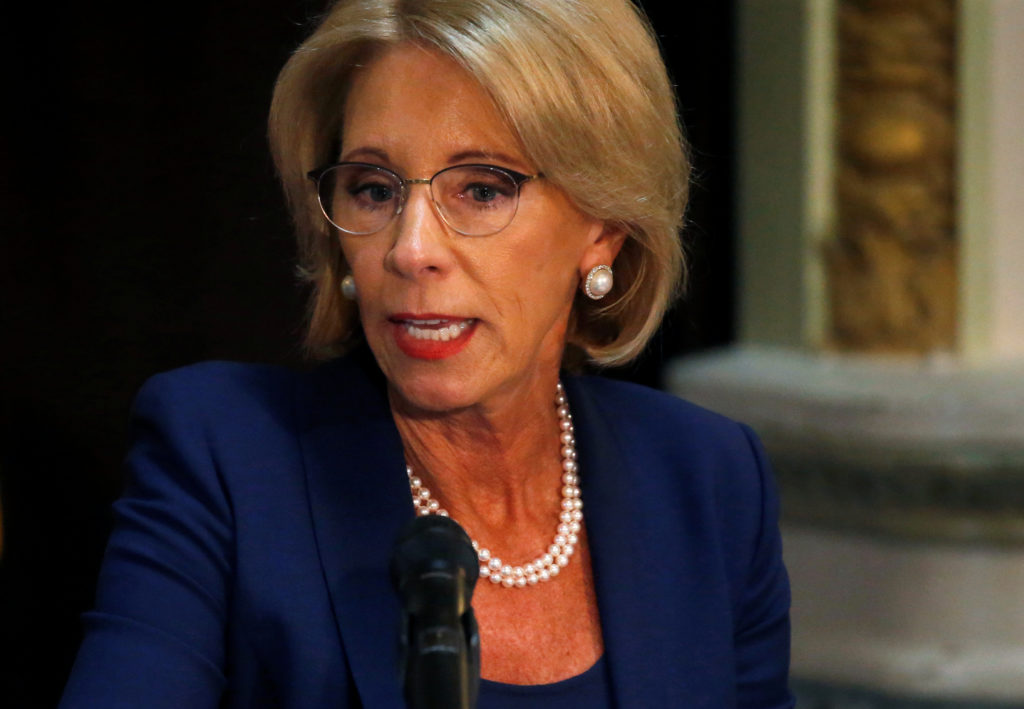 The plan, first reported by The New York Times, prompted swift condemnation from Democratic lawmakers and many educators on Thursday, who accused the Trump administration of wanting to deprive students of much-needed mental health support and other resources in the interests of the National Rifle Association.

House Minority Leader Nancy Pelosi, D-Calif., called the idea “one of the most egregious, short-sighted and dangerous executive branch abuses of our education system in modern history.”

“Secretary DeVos continues to lead an anti-student and anti-teacher campaign on behalf of special interests and the NRA that rejects proven and effective initiatives to ensure a safe, welcoming school climate for children,” she said.

Democratic Sen. Chris Murphy of Connecticut, which was the site of the Sandy Hook school shooting, swiftly introduced an amendment that would block the Education Department from using the funds to arm schools.

Read more: In June, DeVos said the federal commission on school safety won’t be looking at the role of guns in school violence

“The Secretary of Education cares more about the firearms industry’s bottom line than the safety of our kids, and that should scare parents to death,” he said.

Randi Weingarten, president of the American Federation of Teachers, accused DeVos of trying “to do the bidding of the National Rifle Association and gun manufacturers.”

“Instead of after-school programs or counselors, programs that are critical for creating safe and welcoming schools and addressing the mental health needs of kids, DeVos wants to turn schools into armed fortresses and make kids and educators less safe,” Weingarten said in a statement.

“She wants to turn the U.S. government into an arms dealer for schools. That’s insane,” she added.

“It seems very hard to imagine that members of Congress drafting Title IV envisioned that the funds would be used to arm teachers,” West said.

One of the requests for clarification came from Texas, where many school districts allow staff to carry weapons on campus. The Texas Education Agency said in a statement Thursday that it asked Washington for guidance in April after schools started asking whether they can use the grant money to cover the cost of guns. The problem took on even greater urgency in Texas after 10 people were killed in a school shooting outside Houston in May.

Left: Students wait to cross a street to enter for the first day of classes at Marjory Stoneman Douglas High School in Parkland, Florida, on Aug. 15, 2018. REUTERS/Joe Skipper