Education Leaders Square Off Over Charters at ‘Superman’ D.C. Premiere 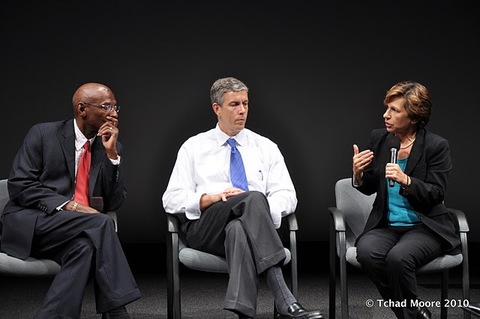 Three documentaries released this year focus on the troubled American education system. The highest-profile is “Waiting for Superman,” directed by Davis Guggenheim, who also directed the global warming documentary “An Inconvenient Truth.”

“The Lottery,” by Madeleine Sackler, focuses on four families from Harlem and the Bronx who have entered their children in a charter school lottery. “Race to Nowhere” is director Vicki Abeles’ personal look at the grinding pressures on students to succeed. Another film, “August to June” takes a more positive approach by documenting a year at a progressive school in California.

But it is the poignant stories in “Superman,” about children in crime-ridden neighborhoods pinning all their hopes for a good education on coveted spots in over-subscribed experimental charter schools, that the producers hope will spark a broad-based effort to fix the system.

At the Sept. 15 Washington, D.C., premiere of “Waiting for Superman,” an all-star education panel hashed out differences over the film’s positive portrayal of charter schools and critical take on teacher’s unions.

Also on stage was the head of one of America’s biggest teachers unions, American Federation of Teachers President Randi Weingarten.

In the film, Weingarten resists efforts by school reformers to fire tenured teachers who fail to improve student performance, as well as proposals to lengthen the school day and year.

Reviewers have noted that Guggenheim’s film lionizes Rhee and Canada, but, in the words of Variety, portrays the union boss as “something of a foaming satanic beast.”

Earlier this month, Weingarten sent out a press release criticizing the film for casting “several outliers in starring roles — for example, ‘bad’ teachers and teachers unions as the villains, and charter schools as heroes ready to save the day. The problem is that these caricatures are more fictional than factual.”

But the tenor of the panel discussion was for the most part polite. Duncan began his remarks with a call to action, saying that for a nexus of reasons, “economic, civil rights and national security,” the time to fix the nation’s schools is now.

Canada, who founded the Harlem Children’s Zone, said the crisis in education feels “no different than [Hurricane] Katrina,” adding that the national conversation about education hasn’t “been honest about the challenges.”

“We need to be able to talk about tenure for lousy teachers. … This idea that anyone can teach is just not true.”

Weingarten countered that “teachers actually hate teaching with ineffective teachers,” adding that her union is now willing to rethink its approach to the tenure issue.

Part of the conversation addressed this week’s dramatic D.C. primary, which ousted Michelle Rhee’s boss and biggest supporter, Mayor Adrian Fenty. In the film, Rhee is portrayed as a hero, engaging in a three-year battle to close poorly performing schools and come up with a teacher contract that would enable her to fire tenured teachers for bad performance. Those negotiations pitted Rhee against the local teachers union president George Parker, but also against Weingarten. The film ends before the D.C. contract, which is viewed by reformers as a nationwide model, was finally agreed upon in the spring.

For her part, Rhee was characteristically blunt. One of the more uncomfortable moments in the discussion was when Rhee criticized Weingarten for talking about charter schools as if they were not part of the public school system.

And when asked about the primary election results, she called them “devastating.”

“Not for me, because I’ll be fine,” Rhee said, “and not even for Fenty because he’ll be fine, but devastating for the schoolchildren of Washington, D.C.”

Duncan was clear on his support for charter schools, but struck a conciliatory note on unions, saying that they can be a “huge part of the solution, and a huge part of the problem.” He pointed out that unions “are not monoliths” and credited the National Education Association leader in Delaware, Diane Donohue, with helping her state win millions of dollars in the department’s Race to the Top contest.

The education secretary ended the evening with an announcement about an upcoming national teaching campaign to recruit the next generation of teachers. One third of the nation’s teachers are retiring in the next couple of years, he said, and the Obama administration wants to replace them with a diverse corps of well trained and compensated professionals. Another department priority in the coming year is to target the bottom 5 percent performing schools, which he called “drop-out factories.”

Duncan said he hopes the “Superman” documentary and other films galvanize the American public to participate in change. “Once you see how much these poor families want a good education,” he said, there are no excuses not to give every child the chance at a brighter future.