For nearly six years, Andrew Card had a desk just outside the Oval Office. Today, the man who served as chief of staff under President George W. Bush is going back to college, taking the helm as the fifth president of Franklin Pierce University.

Minutes after two planes crashed into the World Trade Center, it was Andrew Card’s job to walk into a Florida classroom and tell President Bush that America was under attack.

“That photograph of me whispering into President Bush’s ear is truly iconic,” Card said in a recent interview on campus in Rindge, New Hampshire. “I am not an iconic individual, but the picture itself is iconic. And I promised never to forget what happened that day.” 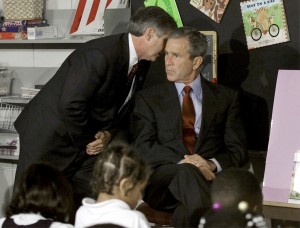 In the days and months that followed, it was Card’s job to help sell the war in Iraq to Congress and to the American people. Later, it was his job to defend the president’s response to Hurricane Katrina and then a stormy economy. It was backbreaking, demanding work.

“I had to deal with incoming challenges before I had an opportunity to turn around and see what happened yesterday,” Card explained.

Now, eight years after he handed in his resignation, Card is taking on a new challenge as the president of Franklin Pierce University, a small, intimate institution with 1,400 students nestled in New Hampshire’s Monadnock Valley.

Founded in 1962, the university is among those brick-and-mortar colleges facing a host of problems — small endowments and shrinking enrollment. Credit agencies like Moody’s say these schools are financially unsustainable. Today, Standard and Poor’s issued a report calling non-profit higher education a “buyers’ market” where schools face great pressure to reduce tuition even as their costs continue to rise.

On campus this month, the 67-year-old has been introducing himself to students and faculty, like a politician seeking support.

“You should all know that I am going to need some help because this is a generational problem,” Card said to a small group of faculty. “I am more of an analog guy than a digital guy, so you can help me make the transition to Facebook or whatever.”

Social media is one way Franklin Pierce is trying to turn things around.

The former chief of staff, though, welcomes the challenge.

“I am not anxious to get in a rocking chair and talk about yesterday,” Card said. “I’ve got plenty of things on my resume. In fact, I haven’t been able to hold a job very long. Making a difference is what I want to do with the final years of my productive life.”

Card is decidedly optimistic. He’s also pragmatic. At a time when many families are questioning the value of a college degree, he says, under his leadership, Franklin Pierce will work quickly to prove its worth.

“Higher education has to demonstrate to those people who are making an investment in a university that the student will graduate with skills that will allow them to participate in the growth of our economy and our country and helping to solve problems,” Card said.

When Card was solving problems in the Bush White House, he never imagined he’d settle in higher education, which is widely considered a bastion of liberalism.

That was made clear in 2007 when Card received an honorary degree from UMass Amherst. Students and faculty booed him loudly.

For the past two years, he’s found himself in more friendly political territory, working as dean of The Bush School of Government and Public Service at Texas A&M University.

So how did Card end up at Franklin Pierce? After a high school friend invited him to serve on the university’s board, Card says he was drawn to the political atmosphere in New Hampshire, home to the first-in-the-nation presidential primary.

“I’m not going to check politics at the door,” Card said. “I’m in a state right now that is probably the premier state to be in if you want to participate in retail politics. People in New Hampshire are passionate about the opportunity to change government and make contributions to government and I’m proud to be in a place that recognizes that.”

And as former Florida Governor Jeb Bush ramps up his fundraising campaign for a potential 2016 presidential bid, Card predicts New Hampshire is ready for another Bush.

“The fact that he is John Ellis Bush — Jeb — means that some people want to judge him by the last name rather than who he is,” Card said. “He is a phenomenal leader, and I’m not bashful about saying that if he doesn’t run, shame on us. And if he isn’t successful shame on me.”

For now, though, Card says he will use his political expertise to rekindle pride in this small university.

This story comes from On Campus, a public radio reporting initiative focused on higher education produced in Boston at WGBH.

Left: President George W. Bush's former chief of staff, Andrew Card, seen here at the unveiling of the official White House portraits of the Bush's in 2012, is the new president of Franklin Pierce University. Photo by Larry Downing/Reuters