How feeling respected transforms a student’s relationship to school

READ MORE: A teacher mispronouncing a student’s name can have a lasting impact

A one-time intervention to help teachers and students empathize with each other halved the number of suspensions at five diverse California middle schools, and helped students who had previously been suspended feel more connected at school, according to Stanford University research published in April in the Proceedings of the National Academy of Sciences.

“Changing the mindset of one teacher can change the social experience of that child’s entire world,” said Jason A. Okonofua, a Stanford University social psychologist who led the experiments.

In- and out-of-school suspensions have come under increasing scrutiny as a discipline tactic. One recent study from the University of California, Los Angeles, estimates that because suspensions are so closely linked to later school dropout and referrals to law enforcement, cutting the 16 percent nationwide rate for all 10th grade suspensions by even 1 percentage point could save taxpayers $691 million over students’ lives. 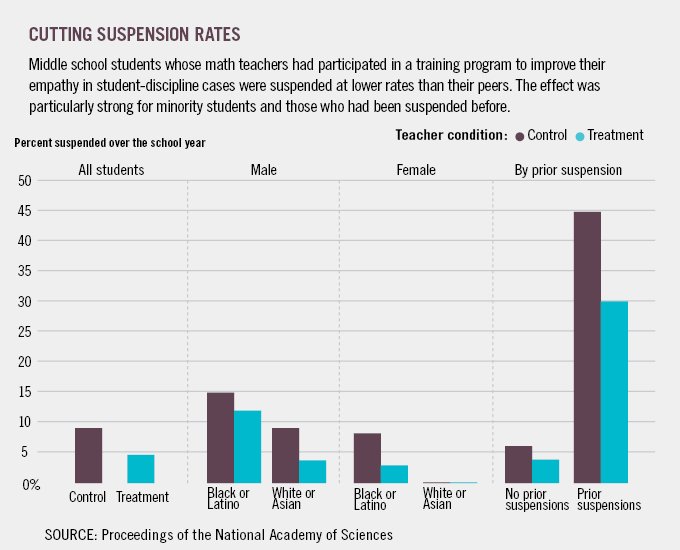 Source: Proceedings of the National Academy of Sciences

In a series of experiments, the Stanford researchers found teachers often view respect in terms of cooperation and compliance. For students, respect involves “a basic recognition of your humanity,” Okonofua said, including remembering a student’s name (and pronouncing it correctly), not speaking down to students or embarrassing them in front of their peers and expressing interest in their perspectives. Both college- and middle-school-age students reported losing respect for teachers who disciplined students in a dismissive or punitive way, and said that they would be more likely to misbehave in such a teacher’s class.

Feeling respected can change how hard students are willing to work in class, too.

A one-time intervention to help teachers and students empathize with each other halved the number of suspensions at five diverse California middle schools.

In a separate series of experiments, Geoffrey Cohen, a Stanford professor of organizational studies in education, found that just a short, encouraging note on a highly marked-up essay could change the way students considered their teachers’ critiques. Adding a note saying, “I’m giving you these comments because I have high standards and I know you can reach them,” significantly boosted students’ willingness to rewrite the paper: from 62 percent to 87 percent for white students, and from 17 percent to a 71 percent of black students.

“The simple act of answering, ‘Do you believe in me?’ can do wonders for a kid who believes he might not have a place in the class,” Cohen said.

There’s a dark side to the results, though, Cohen added. “What does this say about the status quo? It is failing to provide kids with the affirmation that they could and should get to fulfill their potential,” he said. “This is not about giving the kid a note, it’s about changing the culture, providing opportunities for kids to feel valued.”

Okonofua randomly asked veteran teachers to read one of two articles. One argued that good teacher-student relationships are critical for students to develop self-control — a statement aligned with what Okonofua calls an “empathic mindset”— and the other argued that punishment is critical for a teacher to take control of a classroom, a statement aligned with a more punitive mindset.

Then, both sets of teachers were asked how they would handle minor middle school behavior problems, such as disrupting class to throw away trash. Teachers who had read about the importance of relationships were more likely to speak to the student privately about classroom rules and work to find an alternative solution. Teachers who read about control and punishment were more likely to threaten or dress down the student in front of others, send him to the hall or principal’s office, or call for a meeting with the student and his parents or an administrator.

“Our emphasis on teachers’ mindsets does not diminish the importance of punitive discipline policies; rather, it illustrates one reason why such policies matter,” Okonofua said. “They create a context that discourages teachers from prioritizing building strong relationships with students at critical junctures.”

That’s important, because racial stereotypes can increase a teacher’s punitive mindset and escalate punishments. In prior studies, Okonofua and his colleagues had found that teachers are more likely to invoke stereotypes about students of color in response to minor behavioral problems. Teachers were asked to discipline minor behavior problems of middle school students with names associated with white or black children.

“For the first infraction, there was little difference in teachers’ response by race,” Okonofua said. But if, three days later, the student misbehaved in a minor way again, teachers were more bothered by the behavior and more likely to consider it part of a pattern by a “troublemaker” if the student had a “black-sounding” name. Moreover, those — mostly white and female — teachers were more likely to recommend a severe punishment like a suspension for the behavior.

“Stereotypes serve as glue, sticking otherwise unrelated behavior together to make it seem like a pattern,” Okonofua said. “The label ‘troublemaker’ leads teachers to want to discipline students more severely, because they see the behavior as a sign of disrespect.”

“Teachers are stressed out, depleted, and they can tend to lose sight of the relationships they want to build with their students.” –Jason A. Okonofua, Stanford University social psychologist

That could help explain why, in spite of a 20 percent drop in out-of-school suspensions nationwide since 2011-12, new federal civil rights data show racial disparities in discipline continue. Black students are nearly four times more likely to be suspended out of school than white students: While 6 percent of all K-12 students were suspended out of school in 2013-14, 18 percent of black boys and 10 percent of black girls were suspended, compared to only 5 percent and 2 percent for white boys and girls. Even in preschool, black children are more than three times as likely to be sent home for misbehaving than white children, federal data show.

Based on the teacher study, Okonofua and his colleagues developed a professional development workshop for teachers in five middle schools in three districts. Math teachers — chosen because math is a core subject and one associated with a high risk of stereotype threat for black and Latino students — took part in one 45-minute, in-person workshop and one 25-minute, online exercise on ways to resolve misbehavior in class. Teachers were randomly assigned to either a control group or a training focused on how stress and insecurities that children develop during adolescence can make them detach or act out in school. The teachers also heard testimony from students, talking about how they felt more cared for and respected when teachers took the time to understand them during discipline, and they worked through exercises about empathetic rather than punitive ways to respond to rule breaking.

“I don’t think the concept of empathy is something new to many teachers,” he said, but “there are a lot of other factors involved. Teachers are stressed out, depleted, and they can tend to lose sight of the relationships they want to build with their students.” The intervention is “creating a way psychologically for that empathy to persist in light of stressful environments. It’s not that [empathetic] teachers just stop disciplining students. When they discipline, they ask the student why he or she is misbehaving and try to address the misbehaving in a way that addresses the behavior instead of the identity of the child.”

In Okonofua’s study of 2,000 middle schools, students whose math teacher participated in the empathy training were half as likely to be suspended by the end of the school year than students whose teachers had not participated. The strongest effects were for students — often black and Latino boys — who had been suspended at least once in the prior year. In surveys a few months later, those same previously suspended students were also significantly more likely to report feeling that their teachers respected them if they had teachers who had participated in the empathy training.

“Just having one better relationship with a teacher at school — just one — can serve as a buffer for all the other struggles and challenges.”

“The most interesting and inspiring part is that we only intervened with one of the students’ teachers, and it affected their interactions with every other teacher. Just having one better relationship with a teacher at school — just one — can serve as a buffer for all the other struggles and challenges at school,” Okonofua said.

Geoffrey Cohen called this sort of intervention “nudge and flow” — not an attempt to teach students or educators new skills, but to “give a person encouragement at the right time to look at a context in the right way.”

The researchers plan to repeat the study with a larger group of schools next year, as well as follow up in more detail on how students’ and teachers’ feelings of respect for each other change over time.

Left: Feeling respected can change how hard students are willing to work in class and can cut the number of student suspensions, according to studies by Stanford University. Photo by Robert Daly/ Getty Images

Sarah D. Sparks is an assistant editor at Education Week and covers education research. She blogs at Inside School Research.