Why do some states bar older students from receiving financial aid?

Misty Aemisegger had always planned to go to college, but when her daughter was born, she decided to stay home and take care of her.

A series of short-lived factory jobs, including one that involved chemical exposure she suspects of causing her severe asthma and liver damage, revived her college aspirations.

But because she’s 34, the born-and-raised Michigan mother of two doesn’t qualify for state financial aid.

That’s because residents who graduated from high school 10 or more years ago are not eligible for state tuition assistance at Michigan public colleges and universities.

Nationally, about half a dozen states have similar, or even tighter, restrictions, with some allowing students no more than two years between high school and college in order to receive financial aid. Another dozen make it difficult for older-than-traditional-age students to get anything more than token amounts of financial aid toward bachelor’s degrees. 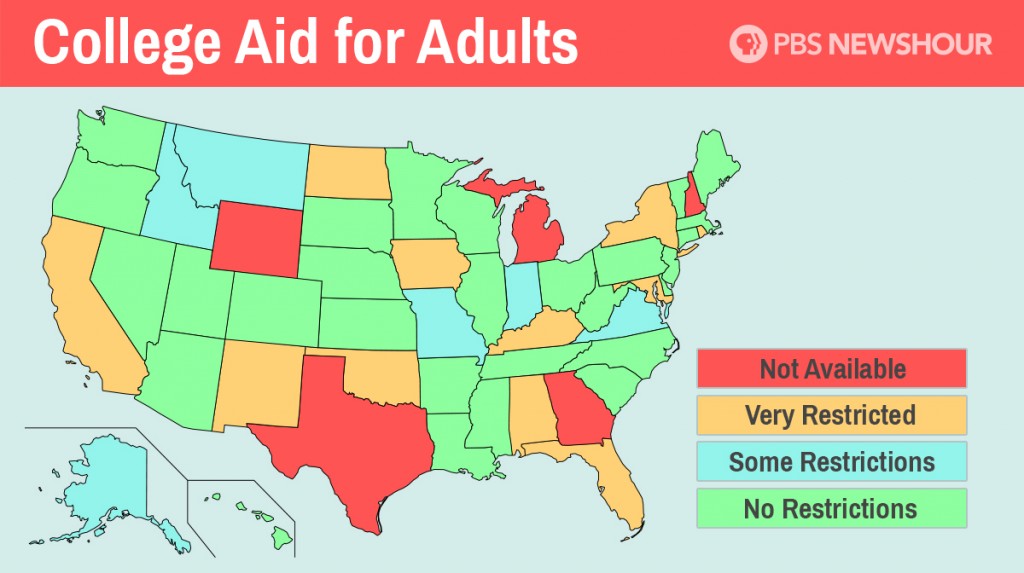 The idea is to encourage high school graduates to go directly to college, since those who don’t are less likely ever to end up there. But the effect is to make higher education even more expensive for some of the nearly 7.2 million people over age 24 enrolled in colleges and universities, and to discourage others altogether.

Michigan, for instance, previously offered several grants targeted at adults. In 2009, the year before they were eliminated, just two of those programs served more than 10,000 students.

“From a workforce development perspective, it was penny-wise and pound-foolish,” said Peter Ruark, senior policy analyst for the Michigan League for Public Policy, which produced a report on the topic. “It saves money today but leaves workers unskilled for tomorrow.”

Americans with high school diplomas on average earn $27,607 a year, the Census Bureau reports, while those with bachelor’s degrees make $50,096.

Although each year more than 100,000 Michigan residents over age 30 apply for federal financial aid, which has no age restriction, the most they can get from that source is $5,730, which doesn’t cover even half the cost of in-state tuition at Michigan’s four-year public universities, the sixth-most expensive in the country.

In her quest to get a better-paying job, Aemisegger took out loans and enrolled at a community college. She finished her first year, then switched to part-time status when she got a job in an insurance office. Being dropped from a class because of several absences when her kids were sick disqualified her from continuing to get her student loan, which required that she take a minimum of 12 credits per semester.

“My balancing act was just so delicate,” Aemisegger said. “When it got thrown off just a tiny bit, it just all came tumbling down.”

Related: Colleges that pledged to help poor families have been doing the opposite

Among the other states that effectively bar older students from financial aid for bachelor’s degrees at public universities are Georgia, Texas and Wyoming.

In Georgia, residents are eligible for the state’s HOPE scholarship only if they have graduated from high school within the last seven years. Democratic state Rep. Stacey Evans would like to change that.

“A high school diploma used to go a lot further than it does now,” said Evans, who has introduced a bill to get rid of the seven-year limit. “For the state, it’s absolutely a win, because if you have a more educated person, that person is going to be more employable, and that will attract businesses.”

Texas has an even stricter policy. Residents there must enroll in college no more than 16 months after graduating from high school or 12 months after completing military service in order to qualify for the state’s primary need-based grant. Only 42 percent of working poor families in Texas have college experience, the second-lowest proportion in the country.

In other states, older-than-traditional-age students are technically eligible for financial aid for college, but the amounts are negligible or the deck is stacked against them.

In Rhode Island, the only grant available for older students has a maximum award of $500 a year. In Mississippi, eligibility for the main grant ends three years after a resident’s high school graduation date, while another program is restricted to full-time students and provides only $500 annually for the first two years, or about 7 percent of in-state tuition.

Related: Poorest states cut what experts say could help the most: higher ed

Some advocates note that changing these rules could benefit entire families, since one of the biggest risk factors for a child not graduating from college is having a parent who also has not graduated from college.

Others argue that expanded opportunity could help fill the demand for college-educated workers.

“If you just look at the numbers, there’s no way the U.S. can fulfill the need for jobs based on college credentials only using students under 25,” said Hadass Sheffer, president of the Graduate! Network. “You have to bring in the adults.”

Aemisegger isn’t giving up. She has a new job at a credit union and hopes to re-enroll in college.

“I have every intention in moving up in the company so I plan to find out what classes would take me to the next level,” she said. “If the balancing act wasn’t quite so hard — that would be really amazing.”

This story was produced by The Hechinger Report, a nonprofit, independent news organization focused on inequality and innovation in education. Read more about higher education here.

Left: Residents who graduated from high school 10 or more years ago are not eligible for state tuition assistance at Michigan public colleges and universities, like the University of Michigan, pictured. Photo from Flickr user Ian Freimuth