Graduate programs have become a cash cow for struggling colleges. What does that mean for students?

BOSTON — Josh Caouette was cramming for a test in the doctoral program he’s just begun in physical therapy at Simmons College, for which he’s relying on student loans to pay the $51,850-a-year tuition and fees.

He took a break from his notes to consider the fact that schools like Simmons are increasingly banking on the considerable revenues from graduate programs to subsidize their undergraduate divisions.

“I never really thought about it that way,” said Caouette, who already has student-loan debt he racked up getting his bachelor’s degree from the University of New Hampshire. “It’s interesting that my money is kind of funding someone else’s education.”

But Caouette said he was resigned to the cost of his tuition. “I wish it were a little cheaper, obviously, but if it’s helping others, that’s fine by me.” He paused and shrugged. “I mean, I have to do it either way.”

Cash-strapped private universities and colleges are relying on the money they take in from their graduate programs to stabilize increasingly wobbly budgets. Public institutions are using revenue from graduate offerings to make up for state cuts and undergraduate tuition freezes ordered by governors and legislatures.

It’s an effective solution to a big problem. But it also means that higher education’s money problems are being balanced on the backs of graduate students who face escalating debt.

It’s an effective solution to a big problem faced by institutions often accused of being financially unimaginative; the president who put it into place at Simmons is a former bank executive who inherited a school that could barely meet its payroll and has transformed it into one that now has tens of millions of dollars in annual surpluses.

But it also means that higher education’s money problems are quietly being balanced on the backs of graduate students who face escalating debt.

“It comes at a cost at the graduate level,” said Joseph Verardo, a master’s degree student in technology systems management at Stony Brook University and vice president of the National Association of Graduate-Professional Students. “The unintended consequence [of correcting colleges’ finances this way] is that it comes out of graduate students’ pockets.” 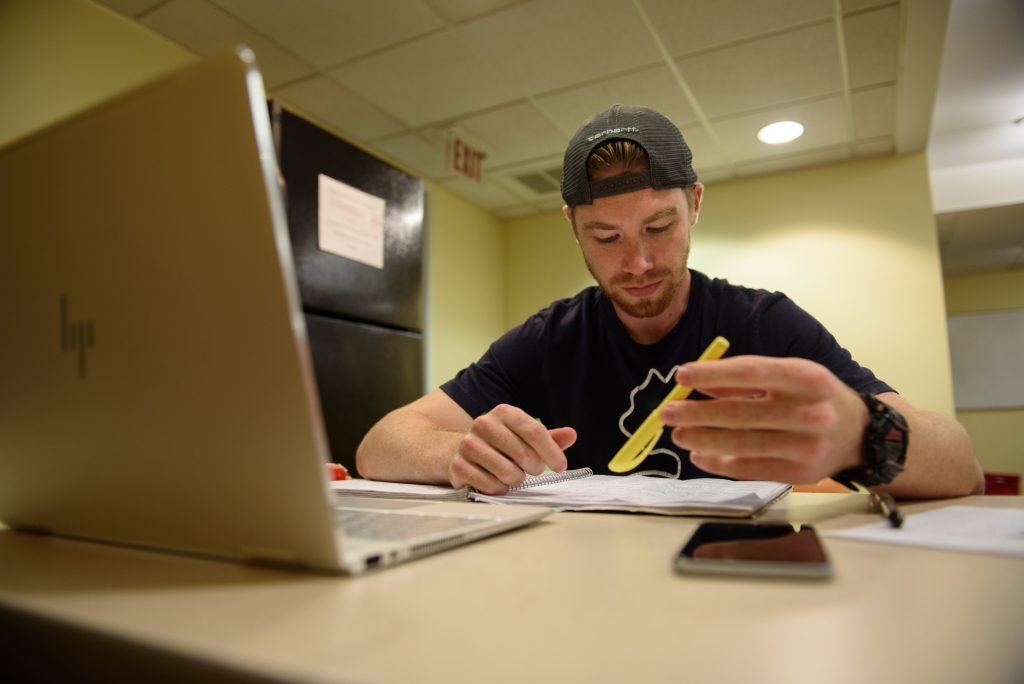 Josh Caouette, a graduate student at Simmons College, crams for a test. Caouette is resigned to the cost of his degree. “If it’s helping others, that’s fine by me. I mean, I have to do it either way.” Photo by Kate Flock for The Hechinger Report

Graduate education is a growth industry. As employers increasingly require master’s degrees, the number conferred per year has more than tripled from nearly 236,000 in 1970 to about 759,000 in 2015, the last period for which the figures are available from the U.S. Department of Education

With increasing demand come higher prices. Average graduate and professional school annual tuition at all universities and colleges has also more than doubled from $6,603 to $14,398 between 1988 and 2010, when adjusted for inflation, according to the Department of Education. At private institutions, it’s grown from $12,301 to $20,172.

That’s an irresistible source of revenue for colleges and universities, said Andrew Policano, a professor of economics and public policy and former dean at the Paul Merage School of Business, University of California, Irvine. He cites the famous quote attributed to the outlaw William “Willie” Sutton, when asked why he robbed banks. “Because that’s where the money is,” Sutton purportedly responded.

“Well, this is where the money is,” said Policano, author of the book “From Ivory Tower to Glass House: Strategies for Academic Leaders During Turbulent Times.” “If you can charge more money for graduate school, you do it.”

That’s the course Simmons president Helen Drinan chose to take when she arrived on the campus in 2008 to discover, on her first day, that the university couldn’t make payroll. Weighed down by its small all-women undergraduate division, Simmons had lost nearly $30 million in just the previous three years.

“We had no cash on hand. None,” remembered Drinan.

Unlike other all-women schools, Simmons decided not to go co-ed to solve its problems. “When you give up your mission, you start to drift,” said Drinan. “If you don’t have something that differentiates you, you can’t compete.”

Instead, to improve its competitiveness and therefore its desirability, the university purposely reduced its enrollment, increased financial aid for its undergraduates (there are 1,790) and offered new full-tuition scholarships for the best applicants, which created buzz.

Paying for that required laying off 90 employees and freezing salaries for the rest. Simmons had to borrow $20 million from its endowment to finish a half-completed building for the school of management. It took out a mortgage on its dorms.

Then, said Drinan, it started looking at market data to see how to underwrite these obligations over the long term.

“We needed a strategy,” she said. And so administrators began asking: What’s out there that people say they need?

The answer was Simmons’ graduate programs, offered to both women and men. In addition to the in-person graduate classes it already provided, it teamed up with the digital higher-education provider 2U to sell its courses online.

“We said, ‘This is where we’re going to make more money.’ We had established master’s degree programs we could market” in such high-demand fields as social work and nursing, Drinan said. In record time, she said, Simmons went back to 2U and said, “Where do we sign?”

The partnership began in 2014, and Simmons made $5.4 million that year from its online graduate programs. In the fiscal year that ended last June, federal tax documents show, that was up to $56 million.

The documents show that while its undergraduate division did a little better than break even in the fiscal year that ended last June, Simmons took in more than $98 million a year from its in-person and online graduate programs combined — nearly $24 million more than they cost to provide. The university’s total annual revenues from all sources have nearly doubled, from $109 million to $208 million, since Drinan took office.

“I love looking at these numbers,” Drinan said, peering at a tablet on which she keeps the university’s financial data.

She deflected the idea that Simmons’ turnaround was built on graduate students’ tuition.

“You have to look at the whole picture,” she said. Rising prices threaten traditional residential undergraduate education. “We need that. How are we going to produce the leaders of the future if we lose it? If we give that up, the nation gives up a tremendous asset. But how are we going to pay for it?”

Meanwhile, for their contribution, graduate students get something in return, said Drinan: higher pay. “This is about professional graduate education. This is about studying something that’s going to improve my ability to make a living or to change jobs.”

And it does. Average earnings for 35- to 44-year-olds with master’s degrees are nearly 25 percent higher than for those with bachelor’s degrees, the Urban Institute reports.

“The overarching data about graduate degrees is that they pay off in every single field of study in terms of lifetime earnings, in terms of employment rates,” said Julia Kent, spokeswoman for the Council of Graduate Schools.

“The big growth in loans has been in graduate schools. Yet there’s just no heat on what are people getting for these degrees.”

But paying for those degrees has gotten much, much harder. Fewer than 40 percent of master’s degree candidates get institutional financial aid — less that half the proportion of undergraduates who do. Also unlike undergraduates, they face no limits on borrowing toward their tuition. And they’re charged higher interest rates: 6 percent and 7 percent for the two principal kinds of federal graduate-student loans, compared to the 4.45 percent undergraduates pay.

While attention is typically focused on undergraduate student debt, some 40 percent of the more than $1 trillion Americans owe for college is for graduate study, the think tank New America calculates.

“The big growth in loans has been in graduate schools,” said Jason Delisle, a research fellow at the American Enterprise Institute. “Yet there’s just no heat on what are people getting for these degrees. On the undergraduate side there are loan limits and concern around defaults and earnings. On the graduate school side, there’s none of that.” 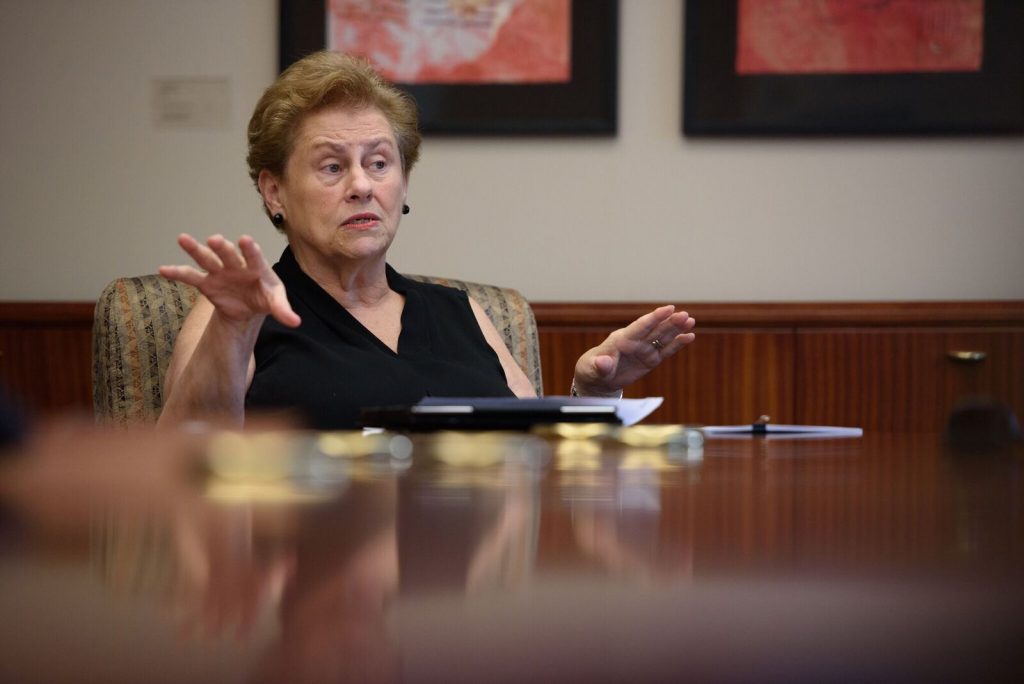 “Those are great degrees to have, but you don’t necessarily make huge sums of money with them,” said Verardo, of the graduate student association.

Sixty percent of master’s students feel stressed about their finances, a survey by the Council of Graduate Schools and the financial services provide TIAA found. Nearly 40 percent drop out or still haven’t completed their degrees after 10 years, according to the Urban Institute.

Simmons may have been unusually successful at maximizing graduate revenue, but it’s far from unique. Marygrove College in Detroit announced in August it was jettisoning its entire undergraduate program and preserving only its graduate program. “Grad studies are sustainable and in demand,” said Kay Benesh, the chair of the college’s board of trustees.

“Everybody’s been forced to confront the business issues of higher education,” Policano said. And if that means using graduate revenues to balance budgets, he said — as long as graduate students are getting their money’s worth — “then full speed ahead.”

Even he and other economists who admire the approach, however, worry about one other prospect: that colleges and universities may become so dependent on graduate programs that they could slip back into trouble if the growth in those programs — or the prices they’re able to charge — slows down.

That’s already begun to happen. The rate of increase in graduate tuition has begun to slow since 2010, the Urban Institute reports. So has growth in graduate enrollment. Both trends have been driven by an improving economy that has sucked people back into the workforce and by a hemorrhaging of graduate students from private, for-profit universities.

“In the short term, if there’s demand for this degree, that’s great. But it’s kind of like being addicted to heroin.”

“As others around the country see that there’s demand for that specialized degree and more players get into the market, your market share starts to shrink and you may end up having to lower your price,” said Glen Nelson, an associate dean at Arizona State University who studies tuition policy. “In the short term, if there’s demand for this degree, that’s great. But it’s kind of like being addicted to heroin.”

Back at Simmons, however, Drinan has no second thoughts about her strategy.

“We now are in a place where we’re not worrying day to day,” she said. “If we’d waited, we’d be closed.”

Left: A former bank executive, Helen Drinan, took over as president of Simmons College only to discover the university couldn’t make payroll. She has since used revenue from graduate programs to help restore financial health, an increasingly common strategy in higher education. Photo by Kate Flock for The Hechinger Report