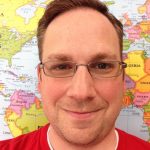 Editor’s Note: Comic books have a long history of tackling social issues. In recent years, criticism has centered on the characters themselves; some readers blamed publishers for creating diverse characters in order to be politically correct. But Marvel’s Sana Amanat who co-created Ms. Marvel’s Kamala Khan, Marvel’s first major Muslim superhero, recently said in a Women’s History Month celebration at the White House, “We seek to share stories of heroes that showcase what the world actually looks like — because diversity is not a trend, it is simply, life.”

Tim Smyth, a social studies teacher at Wissahickon High School in Ambler, Pennsylvania, has read comic books since he was a young boy. While he has taught for 15 years, it was only in the last two years that Smyth decided to integrate his passion for comic books into his classes. But now he says comic books and graphic novels are powerful vehicles to engage students in both history and current events.

A couple of years ago, I decided to share a Spider-Man comic with a young African-American teen with whom I was struggling to connect. In that issue, Peter Parker was replaced with Miles Morales — a character who looked like my student. He asked if he could borrow the comic which gave us a something to talk about together. I began to regularly share each new issue and his engagement, both in the class and with me, changed dramatically. I began to see how comic books could not only convey historical topics, but also help students to see themselves in our lessons.

Later, as I completed my master’s program in reading, class discussions often focused on expert claims that boys don’t read. Having been a boy myself, I remember often not wanting to read the assigned books. It wasn’t until I was inspired by the words of Pulitzer Prize author, Art Spiegelman, writer of the graphic novels “Maus,” who said, “Comics are a gateway drug to literacy” that I started to think how I could teach social studies using comics.

While I do not use comic books in every lesson, my classes are surrounded by images of diverse comic book characters which allows my students to see themselves in these titles. Many students learn to see past the idea that comics are about superheroes in tights and learn instead to recognize the current issues the stories seek to explore. 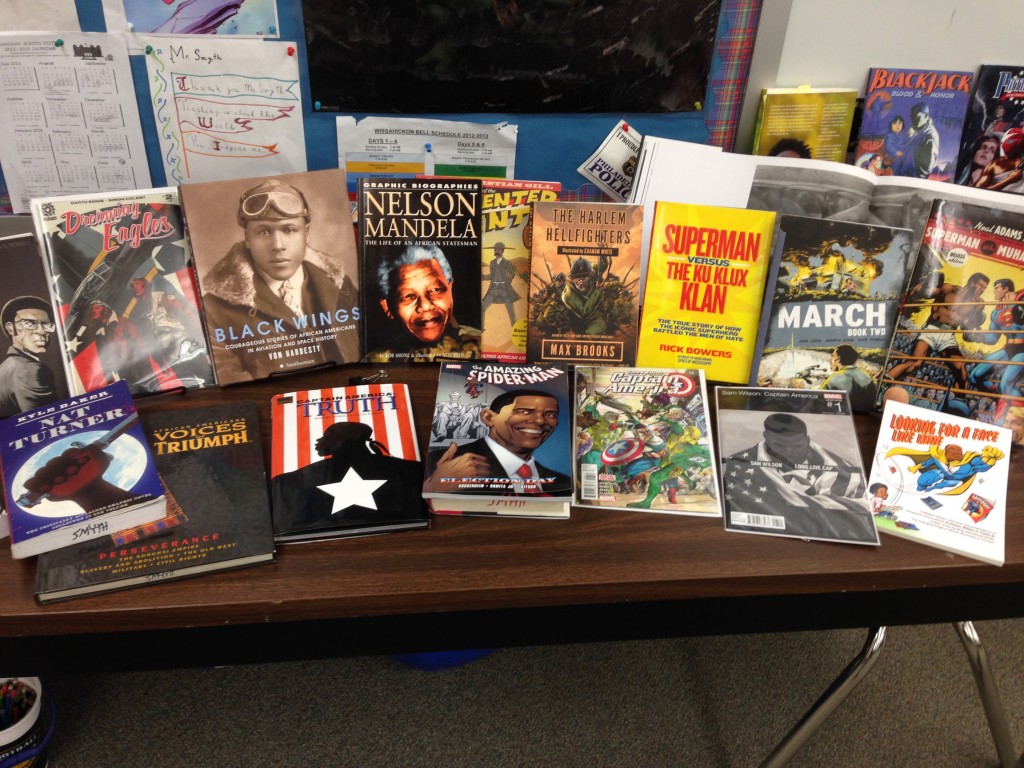 My students might see themselves in a female Thor (who is also fighting breast cancer), a black Captain America, a gay Iceman, a strong (and now fully dressed) Wonder Woman and Batgirl, a Korean-American Hulk or in the more traditional Caucasian characters as well. One of my students is currently researching a thesis paper based on how society’s changing views of the LGBTQ community has been mirrored in current comics.

“I began to see how comic books could not only convey historical topics, but also help students to see themselves in our lessons.” — Tim Smyth, teacher
Students can easily borrow comic books and are encouraged to write literary and historical reviews of them. My personal favorite comic in which the lead character is a female includes the new “Spider-Woman” title. Spider-Woman’s storyline focuses on her pregnancy and whether she will need to abandon her superhero role. It brings up the point that male superheroes never have to struggle with the question — can I have a career and a family?

Wonder Woman and Batgirl, who have always been strong characters, now wear uniforms that are far less sexualized and resemble more those worn by their male counterparts. There is also a new comic addressing the issue of positive body image titled, “Faith,” which follows the adventures of a strong female superhero who is overweight.

Comics serve as a time capsule for society and my students are encouraged to look at changes over time and analyze what they see. During Black History Month, I put out a variety of materials on topics such as the Harlem Hellfighters, Tuskegee Airmen, and even one on Senator John Lewis (March), which both students and teachers borrowed.

For Women’s History Month, I am excited now as my classroom showcase shifts to highlight titles celebrating women’s achievements and the many valuable discussions that will come from evaluating the changing images of women in comics. For example, recent titles like DC’s “Bombshells” coincide with our study of World War II and might inspire students to research the real life Night Witches, a female Russian Air Force unit who carried out thousands of bombing missions against Germany during WW II. “A-force” is a Marvel title that has an all-female superhero team that is similar to the Avengers. “Ms. Marvel” is not only a strong female superhero with her own title, but she is also a Pakistani-American and a Muslim who often reflects on her culture.

Spider-Man comic book panel from March 2, 2016, in which Miles Morales/Spider-Man discusses his thoughts about how he would like to be identified. Photo courtesy of Marvel Comics

The reactions from students stem from true excitement and personal connection to consternation that such beloved characters might be changed to suit current political or societal viewpoints. We have had in-depth discussions of this very adult topic of “political correctness” and all that it brings. The subject is hotly debated in the world of comics today and very much gives insight into contemporary politics as well.

One recent class debate involved the March issue of “Spider-Man” in which the superhero grapples with what diversity means to him and others around him, including a female admirer who was thrilled with the idea of more diverse superheroes. The class remained divided on the subject. During these discussions, students often remark at how quickly the class time flies by and how much they have learned.

As a final thought, I believe in rigor and helping students to develop critical reading and writing skills — comics will never replace the textbook or more traditional books. However, they certainly hook students by tapping into an extremely popular genre that is all around us.

Left: Superheroes come in all shapes and colors: Ms. Marvel is a Pakistani American; Spider-Man, aka Miles Morales, is a Black Hispanic teen; and Faith is a plus-size crime fighter. Ms. Marvel and Super-Man images courtesy of Marvel and Faith courtesy of Valiant

Tim Smyth teaches 10th and 11th grade U.S. and modern history at Wissahickon High School in Ambler, Pennsylvania. Smyth has spoken about how he uses comics in his classroom at numerous conferences including Comic Cons in San Diego, New York and Chicago as well as at the Pennsylvania and National Council for the Social Studies conferences. He has also guest lectured at Gwynedd Mercy University and presented at multiple school districts. Smyth created @EdCampHuman for local teachers to exchange ideas and to connect with one another. His blog is historycomics.net.