How one Minnesota school district handles a rising immigrant population 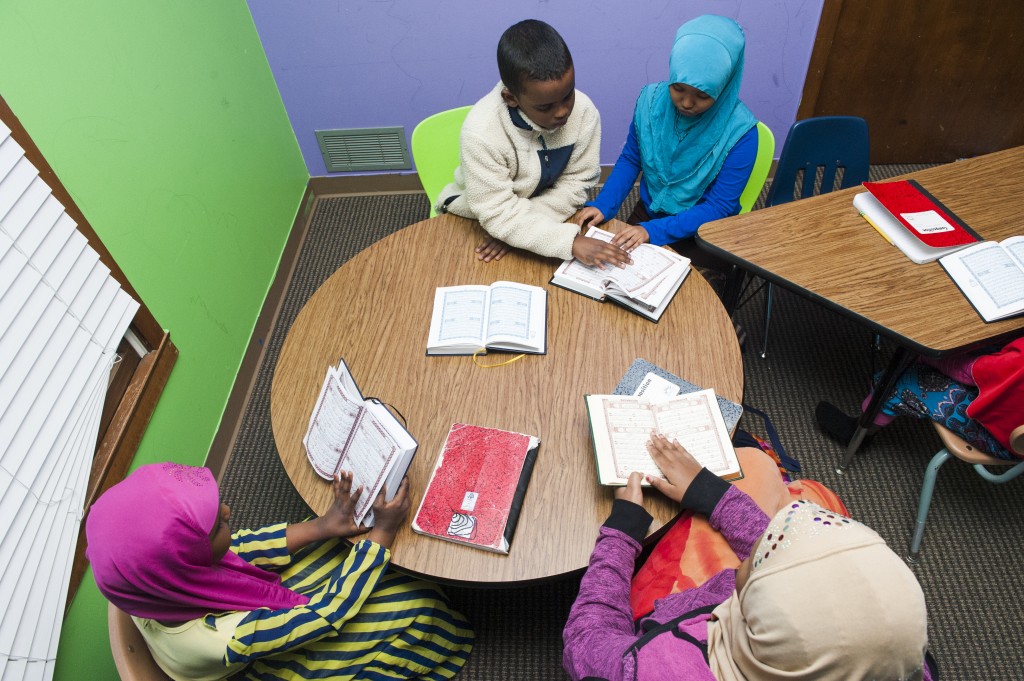 The United States is now home to the largest number of foreign-born black people in its history and many are K-12 students enrolled in public schools. This presents unique challenges for the school districts that welcome them. Photo by Andrew Cullen/Washington Post/Getty

Bishar Hassan spends his days navigating the halls and classrooms of Talahi Elementary School, working to embrace and empower the dozens of Somali students who have arrived since the start of the year.

Across town, his brother, Ahmed Hassan, fills a similar role at Discovery Community School, another campus that has experienced a recent surge in enrollment of Somali students.

The Hassan brothers are part of a growing community of Somali residents in this central Minnesota city of 65,000. The recent influx of immigrant students is nothing new in the St. Cloud school district, where English-language-learner enrollment has spiked by 350 percent in the past 15 years.

Today, roughly 20 percent of the district’s 10,000 students are English-language learners, many of them with ties to the East African nation of Somalia.

Similar situations are developing in districts around the country.

The United States is now home to the largest number of foreign-born black people in its history—and many are K-12 students enrolled in public schools. The English-learners among them are overwhelmingly native Spanish, French, or Haitian Creole speakers, but districts have had to adjust on the fly to meet the needs of students who arrive communicating in less frequently spoken languages such as Amharic, Haitian Creole and Somali.

Nationwide, nearly 35,000 K-12 students report that they speak Somali at home, making it the eighth most common native language for English-learners in public schools, according to federal data from the 2013-14 school year.

Somali families began resettling here in large numbers at the turn of the century, and their children have become fixtures in St. Cloud’s schools. About 1,625 of the district’s English-learners are Somali. And as educators in the St. Cloud district have found, language is often just the first hurdle they encounter when new immigrant communities arrive.

Social service agencies often look to place refugee families in communities where they have access to jobs and other support services, even in places that are not traditional magnets for newcomers.

“They could pop up in places that maybe even haven’t had English-learners before,” said Delia Pompa, a senior fellow for education policy at the Washington-based Migration Policy Institute. “It’s always a challenge to work with English-learners but you can’t overlook the effect of culture and language.”

The Minnesota chapter of the Council on American-Islamic Relations filed a federal civil rights complaint against the St. Cloud school district in 2011, alleging a hostile environment for the district’s Somali students that included widespread and frequent harassment based in large measure, on religion. The majority of the Somali community is Muslim.

“The St. Cloud school district is a long way away from really being a place where all students feel completely welcome,” said Jaylani Hussein, the executive director of the council’s Minnesota chapter.

The Hassan brothers are on the front lines of St. Cloud’s efforts to better serve its ever-expanding English-learner population and integrate the Somali community.

They officially work as bilingual communication support specialists. Their duties range from providing verbal and written translations into Somali and English, advising students, cultural navigation and working to bridge the language and cultural gaps that emerge between district staff members and Somali families.

“We’re in between two stones when it comes to bridging that gap between the communities we serve and the institutions we work for,” Ahmed Hassan said.

One day, the brothers are explaining to parents that all of their children, including those who have disabilities, have the right to a public education. The next, they’re helping colleagues understand that Somali students who don’t make eye contact aren’t being disrespectful; in their culture, children are expected to look down when adults speak to them.

The district has ramped up its efforts to recruit Somali residents, like the brothers, who can relate to the students, many of whom are refugees of the civil war between ethnic groups that erupted in their country decades ago and continues today.

Sundis Ibrahim, 15, arrived in Minnesota two years ago from a Kenyan refugee camp, knowing little English. She’s a sophomore here at Apollo High School, where nearly a quarter of the 1,400 students are Somali.

For Sundis and her classmates, the promise of the bright future their families envision in America is housed within the school walls.

The soft-spoken teenager has made connections since coming to Minnesota, but language remains a barrier. She struggles with science and English/language arts classes, but said that teachers often praise her effort.

“I understand the questions, but I don’t always know the answers,” Sundis said.

The same could be said of school district staff.

Natalie Prasch, St. Cloud’s director of English-learner programs, recruited the Hassan brothers, at separate times, when they came to the district’s Welcome Center to enroll their younger siblings in school.

All told, eight of their siblings have attended or are attending school in St. Cloud; the youngest is a 7-year-old 2nd grader.

For their brothers and sisters, “everything looked different, the system, the people they interacted with, the culture,” said Bashir Hassan, who is 29. “That sense of belonging was the first struggle.”

The same holds true for Ahmed Hassan, 30. He still remembers the day he came to the United States from a Kenyan refugee camp. His arrival in September 2008 ushered in a new life and new hopes, but so much uncertainty. His brother Bashir was his guide.

“He was my counselor, my adviser of what to do and where to go when it comes to being successful in this country,” Ahmed Hassan said.

Schools across the country are educating more than 800,000 immigrant students who have been in American schools for less than three years. And as that population has grown, the U.S. Department of Education has announced plans to work more intently to address the needs of both refugee and black English-learner students in public schools.

Those populations intersect in St. Cloud, where Somali students who spent their entire lives in the desert and tropical climates of Africa must adjust to Minnesota’s brutal winters.

“We’re taking kids who grew up in the desert and sticking them in iceboxes,” Prasch said.

During the winter months, the district is often tracking down coats, hats, and gloves for students at the same time they’re administering home-language surveys—a set of questions used to identify the language or languages an ELL student speaks and understands.

Some students suffer from malnutrition and its mental and physical aftereffects. Those children often hoard food in their lockers because they’re so used to going without.

Then there are the students with no formal education; for them, pencils and books are foreign objects.

Teachers and Somali staff members alike say the students who’ve had little to no experience with schooling are easy to spot. To address their needs initially, more time is spent focusing on structure and order than curriculum and learning English.

In its high schools, St. Cloud has “English Academy” courses designed to aid newcomer English-learners and struggling long-term ELLs get up to speed while teaching core subjects such as biology and math.

In social studies classes, teachers tailor lesson plans to incorporate a global view of events, both past and present. In several classrooms at Apollo High, maps of Africa and Minnesota are posted side-by-side on classroom walls.

Counselors also work to integrate students in English-only courses to help their language development. Almost all the courses have Somali-speaking paraprofessionals ready to translate and address student questions.

Despite recognition from the U.S. Department of Education for its efforts to educate ELLs, the district hasn’t been able to close a yawning achievement gap between English-learners and native English speakers—a problem that vexes most school systems.

Talahi Elementary, where roughly 45 percent of students are Somali, is a state “priority school,” a label attached to Minnesota’s most persistently low-performing Title I schools. With test scores among the bottom 5 percent in the state, the state department of education is closely monitoring Talahi’s performance and turnaround plans.

“We view language as an opportunity, [not] a deficit,” said Principal Kate Flynn, “but we’re always nervous about test scores.”

While St. Cloud works to support the English-language development of its students, district officials say it has been just as important to make Somali students and their families feel welcome in schools and part of the community, which remains a work in progress.

In St. Cloud’s middle and high schools, the district allows prayer time for students, including Muslim students, as federal law requires. The rooms used for prayer are open to all students to observe their beliefs and are used for other purposes throughout the school day.  Districtwide, school lunch menus provide pork-free options for students, and staff members try to spur the newcomer students’ interest in sports, culture clubs, and other extracurricular activities to develop connections beyond the classroom.

Somali student-athletes played key roles on Apollo High’s 2014 state championship soccer team, and track and field teams have drawn plenty of Somali participants. The district has partnered with the University of Minnesota to develop uniforms for female athletes who wear hijab, the headscarves worn by some Muslim girls and women.

“When you’re separated, it’s really hard to feel like you’re a part of the community,” assistant superintendent Marsha Baisch said. “You feel different, you feel other.”

Some students still feel that way.

A 2011 settlement ending a federal civil rights investigation of the treatment of Somali students in St. Cloud requires the school district to report all allegations of harassment.

Under the agreement, the district must make its schools more welcoming to Somalis.

But the agreement didn’t signal an end to the resentment and clashes in the district.

Last spring, racial and religious tensions at Technical High School erupted when students and parents, most of them Somali, alleged that school officials did not adequately respond to bullying incidents and anti-Islamic discrimination.

A social media post that implied a Technical High student had ties to the Islamic State terrorist group whose adherents have been responsible for deadly attacks, sparked the protest.

Several of the Hassan brothers’ younger siblings graduated from Tech High, the site of the mass walkout last spring. As employees, they wonder if enough efforts have been made to hire Somali teachers and administrators.

Hiring trusted community members is key to building a rapport, said Pompa, of the Migration Policy Institute. But the strategy could take time to produce results in St. Cloud.

Many students rely on loans to help pay for college, but under Islamic law, devout Muslims are prohibited from taking on interest-based loans. So many of the Somali St. Cloud schools employees have to work their way through school, often at a slower pace than their peers.

Bishar Hassan, who is a semester away from earning his bachelor’s degree at St. Cloud State, couldn’t peel away from his job in the district to be a full-time student.

He and his brother felt duty-bound to support his family and the city’s Somali community.

“We found Minnesota to be our home,” he said. “This is my favorite thing to do in my life, [making] a difference in the lives of others.”

CLARIFICATION: This story has been updated to describe the uses of the private rooms the St. Cloud district has set aside for student prayer.