When students in the New Orleans Recovery School district head back to class next fall, not one will be attending a traditional public school. The Louisiana city’s Recovery School District, formed after Hurricane Katrina devastated the area, closed its last five neighborhood schools this week, making it the first in the country comprised completely of charters.

“We’re going to create a new legacy, a new memory,” Patrick Dobard, district superintendent said in an article in the Washington Post. 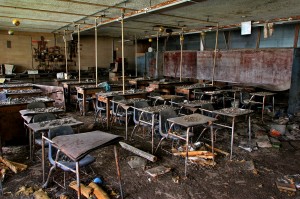 Soon, the district’s 33,000 children will have to apply for the chance to attend one of 58 charter schools in the fall. But the growth of charters in the district have raised concerns including who individual school operators are accountable to, and how to get kids to schools that may be far from their homes.

Supporters of the new system believe parents have more choice with charter schools, which also have more latitude in how they choose to educate kids.

The Recovery School District was created by the state to deal with the turmoil in the city after Hurricane Katrina struck New Orleans in 2005, and the more than 100 poor performing schools there.

Left: The Akili Academy charter school in the Upper Ninth Ward of New Orleans will be absorbing some students from the city's closing public schools. Photo by Edmund D. Fountain for The Washington Post via Getty Images