In Kentucky, an early test of teachers’ new political power

Six years ago, Hannah Laswell made phone calls, knocked on doors and posted videos on Facebook to get Republican Jonathan Shell elected to the Kentucky House of Representatives.

Shell is now one of the most powerful lawmakers in the state. But Laswell is now a teacher, and she says that later this month she won’t vote for Shell to get a fourth term. Instead, in a year when educators across the country rallied for better conditions, she plans to vote for a high school math teacher running against Shell in the Republican primary.

“Our voices were enough to get them elected but not enough to be heard when it comes down to making decisions about our own future,” she said. “That’s what sparked my need to start looking for another candidate.”

Thousands of teachers took their voices to state Capitols this spring, winning pay raises in West Virginia, Oklahoma and Arizona, and increased education spending in Kentucky. Most state lawmakers have returned to their districts to campaign, and teachers have followed them. Scores of educators are running for office across the country, hoping to sustain the momentum from their marches and strikes.

The movement will get an early test in Kentucky’s primaries later this month. At least 40 current and former teachers are running for seats in the state legislature. Sixteen of those have Democratic or Republican primaries, including four against Republican incumbents.

“This pushback means nothing if we don’t show up at the polls,” said Tiffany Dunn, a Louisville teacher who is not running but is organizing to unseat six-term Republican state Sen. Ernie Harris. “They have no reason to fear us … if we don’t make changes at the polls.” 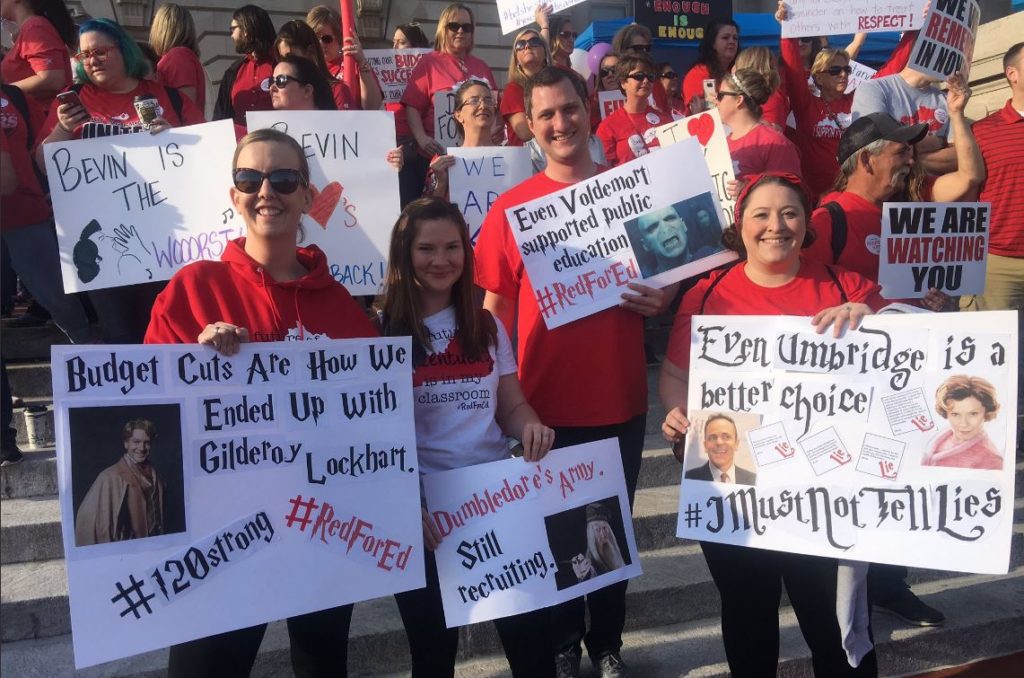 The most high-profile race is in central Kentucky, where high school math teacher R. Travis Brenda is challenging Shell, the House majority floor leader. First elected in 2012, Shell quickly rose to power in 2016 when Republicans took control of the House of Representatives, the last legislative chamber in the South that was still controlled by Democrats.

This year, Shell helped write a bill that made changes to the teachers’ troubled pension plan. The bill has little effect on current teachers, but lawmakers angered educators by passing it without letting anyone read it. Shell said he got at least 5,000 emails about it. He showed a reporter a Facebook message from a constituent that read in part: “I’ll campaign against you until my (expletive) fingers bleed. You are a piece of (expletive). I’m sick I voted for you last term.”

The reaction perplexes Shell and other Republican lawmakers. Legislators cut most areas of state government by 6.25 percent so it could put more than $1 billion in the teachers’ retirement system. And Republicans took the politically risky step of raising taxes so they could boost per-pupil education spending to $4,000 for the first time in state history.

That’s why Shell dismisses criticism as coming from “political opportunists” trying to capitalize on emotion. He has raised more than $72,000 for his re-election campaign, while his opponent has $13,000, according to the latest disclosure reports.

“We’re talking about a small fraction of people who are acting the way we are seeing,” Shell said. “The majority of people, whether it be teachers or the general public, people understand that we had a problem that we had to fix.”

Those would be people like Roger Ayers, a 53-year-old homebuilder in Garrard County, who says he supports Shell because of his work on the pension bill.

“Nobody else has had the guts to go out there and try to save the pensions,” he said. “It’s not a pretty thing, but somebody has got to do it.”

But Shell is not getting credit from challenger Brenda, who notes the legislatively approved budget cut money for things like textbooks and teachers’ professional development. Lawmakers also raised taxes on retirement income, which will affect some retired teachers. And fully funding the teachers’ pension plan is nice, Brenda says, but lawmakers should have been doing it all along.

“They are wanting us to pat them on the back for doing what they are supposed to do anyway,” Brenda said. “Most of those guys that have been in on making those decisions, probably the last time they were in a classroom is when they were a student.”

Teacher discontent could spill over to other races where no teachers are on the ballot. Harris, a Republican state senator for two decades, faces attorney Alex White on May 22. Harris said there is “no question” teachers are targeting him because he voted for the pension bill. But he said it’s too early to tell if he is in danger.

“There is a lot of emotion out there,” he said. “I’m taking these campaigns very seriously. I’m not taking anything for granted.”