FRANKFORT, Ky. — With the chants of hundreds of teachers ringing in their ears, Kentucky lawmakers have completed an override of Gov. Matt Bevin’s veto of a more than $480 million tax hike that helps pay for increases in public education spending.

The Senate voted 20-18 Friday to override the GOP governor’s veto of House Bill 366. The final vote followed a 57-40 House vote in favor of the override. Both chambers are controlled by Republicans.

The bill raises revenue for the state over the next two years. It includes a 6 percent sales tax on a variety of services, including auto and home repairs, to pay for higher classroom spending.

More than 30 school districts across the state were forced to close as thousands of teachers rallied at the Capitol, joining the chorus of teacher protests across the country. Teachers descended on the statehouse wearing red T-shirts and carrying signs that said “I love my public school.” The rally took on a festival-like atmosphere as some teachers sat in lawn chairs or sprawled out on blankets. Crosby Stills, Nash and Young’s hit “Teach Your Children” bellowed from the loud speakers.

The veto put Republican lawmakers in a tough position, asking them to vote a second time on a tax increase in an election year.

“I don’t want to be out of my classroom. I want to be in my classroom instructing future citizens, but I’m afraid that spending at the state level is getting worse and worse and we need those dollars for a 21st century education,” said Stephanie Ikanovic, who has been a teacher for 21 years.

The two-year operating budget includes record new spending for public education, fueled by a 50-cent increase in the cigarette tax and a 6 percent sales tax on some services including home and auto repair. But Republican Gov. Matt Bevin vetoed both the budget and the money in it, calling the bills “sloppy” and “non-transparent.” He said they would not raise enough money to cover the new spending.

The veto put Republican lawmakers in a tough position, asking them to vote a second time on a tax increase in an election year. But 57 Republicans eagerly voted to override, asserting their independence after a tumultuous year marred by a sexual harassment scandal.

“You can stand here all day and act like you are all for (education) until it comes time to pay for it. Well that’s a coward,” said Republican Rep. Regina Huff, a middle school special education teacher. “We have to have this revenue to fund our schools.” 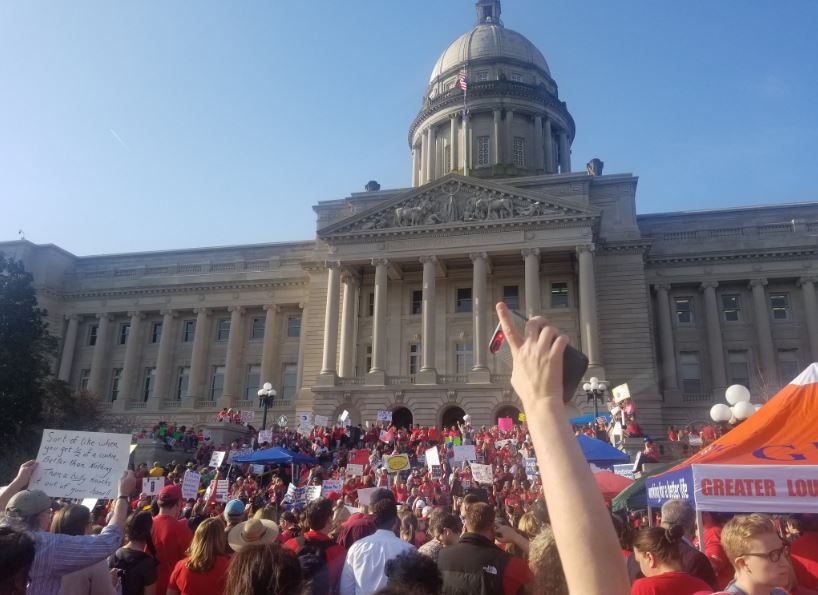 Thousands of Kentucky teachers protest at the State Capitol in Frankfurt, Kentucky, on April 13, 2018, after the Governor signed a law to dismantle state employees’ pension. The state Legislature passed the bill at the last-minute, taking many state employees by surprise. Photo provided by courtesy of teacher Brian Jones of Lexington, Kentucky

Six Republicans voted with Democrats to approve the veto. The Republican-controlled state Senate will take up the veto next.

Bevin followed the debate closely, responding to lawmakers’ speeches with tweets. He said he met with House and Senate leaders all week to propose a more “responsible way to pay for 100 percent of the requested education funding.”

“Crickets,” Bevin tweeted, adding he vowed to call a special session to pass a new budget if lawmakers approved his vetoes.

Republican Rep. Jeff Hoover told his colleagues not to trust Bevin, reminding them the governor promised to call a special session last year on pension reform but never did.

“The only reason we did not have a special session last year is because Jeff Hoover, a married man, was sexually involved with a very young, single member of his staff and was paying hush money to hide his actions,” Bevin responded on Twitter.

The unrest comes amid teacher protests in Oklahoma and Arizona over low funding and teacher pay. The demonstrations were inspired by West Virginia teachers, whose nine-day walkout after many years without raises led to a 5 percent pay hike.

In Arizona, after weeks of teacher protests and walkout threats across the state, Gov. Doug Ducey promised a net 20 percent raise by 2020.

Thousands of Oklahoma teachers gathered at the state Capitol again, but crowds were noticeably smaller Friday.

Middle school science teacher Leslie Atkins said several students came to her Thursday and asked if she was attending the rally “for us.”

Kentucky teachers haven’t asked for a raise. They are instead focused on overall funding.

Middle school science teacher Leslie Atkins said several students came to her Thursday and asked if she was attending the rally “for us.”

“And they always said, ‘for us’ — even the kids understand that we’re not here for teachers, we’re here for them,” she said.

Earlier this month teachers lost a battle over pensions, but lawmakers responded with a budget plan that included record-high classroom spending. The Legislature also restored school transportation funding and health insurance for teachers who retired after 2010 but don’t yet qualify for Medicare. 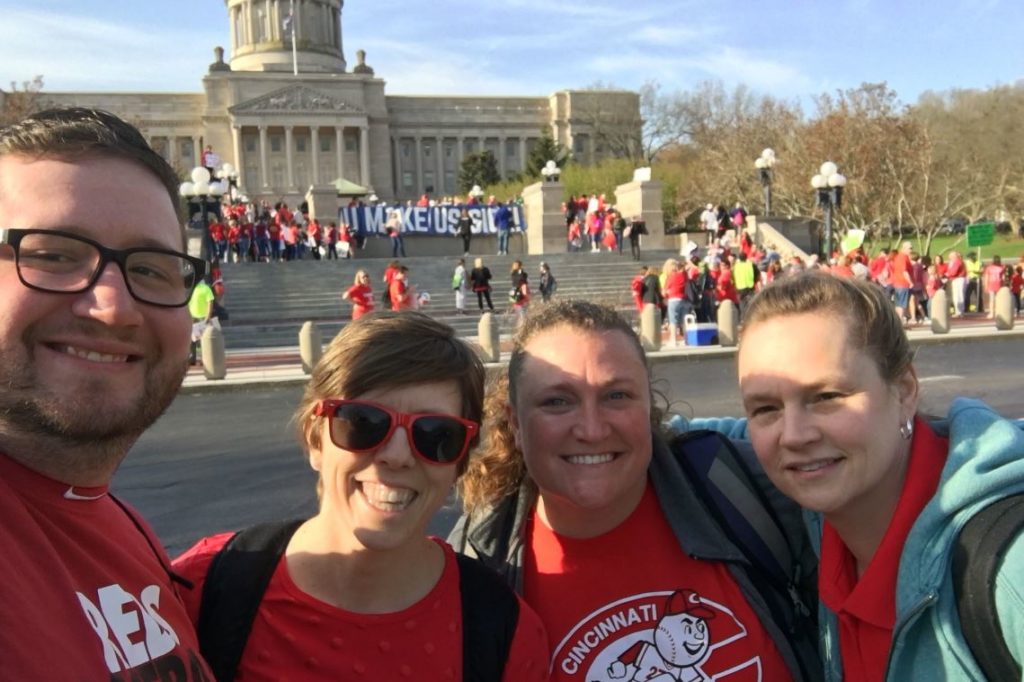 Kentucky’s lawmakers have struggled with the complexities of passing a two-year state budget, searching for education funding and trying to fix one of the country’s worst-funded pension systems. The state is at least $41 billion short of what it needs to pay retirement benefits over the next 30 years, straining state and local government finances.

Bevin further angered teachers by signing legislation altering pensions for teachers and other state employees. The changes preserve benefits for most workers, but move new hires into a hybrid plan. Opponents worry this will discourage young people from becoming teachers. The pension changes have already drawn a court challenge.

Teacher protests are spreading around the nation. Here’s what’s fueling the movement