Should the Confederate flag fly in the Citadel’s chapel? Same law keeping it at S.C. State House says yes

In South Carolina, a state law governs the Confederate flag on the State House grounds — a flag that has become the source of increasing criticism after the murders last week of nine people in a historic black church, apparently by a man obsessed with symbols of the Old South.

Governor Nikki Haley and other South Carolina Republicans — who have insisted on preserving the flag’s honored place there — have started to change their positions on the issue. It turns out that the state law also protects the placement of another Confederate flag. This one is in the chapel of the Citadel, a public university in the state.

That flag is governed by the Heritage Act, which passed in 2000 and which led to the removal of the Confederate flag from atop the State House and placed it in a memorial on the State House grounds. The law barred any change in the position of that flag unless the law is amended with the support of two-thirds of legislators. That provision of the law has been getting a lot of attention. Another part of it states that “any monument, marker, memorial, school or street erected or named in honor of the Confederacy or the civil rights movement located on any municipal, county or state property shall not be removed, changed or renamed without the enactment of a joint resolution by a two-thirds vote of the membership of each house of the General Assembly approving same.”

Last year, a city council member in Charleston, Henry Darby, complained to the Citadel about its flag. The university then obtained an opinion from the state attorney general that the flag was covered by the Heritage Act and cannot be moved.

A spokesperson for the Citadel said Monday that the flag remains and could be moved only following the procedures of the Heritage Act. Asked if the Citadel was asking lawmakers to change the law, the spokesperson said “that’s for our Board of Visitors to determine.”
In an interview with Inside Higher Ed Monday, Darby said he still believed the flag should come down — at the State House and the Citadel.

Darby said that he doesn’t want the state to dictate what individuals put up on private property, but he said that the Citadel is a public university. “It’s tax supported and it should represent all people,” he said.

When he raised the issue last year, Darby said, he was “blasted viciously by alumni” of the Citadel who sent him emails and letters using racial slurs and accusing him of being a racist for wanting to remove the Confederate flag. He said he came to believe last year that “99.9 percent of alumni liked the flag there.” He said that one of the better things that happened in the last week was that one of those alumni who had sent him a rude email last year sent him another email, apologizing for last year’s, and saying that he now understands why some wouldn’t want a Confederate flag at a public university. Darby said he was “prayerfully hopeful that people are changing.”

On Monday, the Citadel issue was largely overshadowed by Haley calling for lawmakers to take action to remove the Confederate flag from the State House grounds. In moves that were notable in the state, Harris Pastides, president of the University of South Carolina, called for the removal of the flag from that position. Via Twitter, so did Jim Clements, the president of Clemson University, and several coaches and athletics officials in the state. In 2001, the National Collegiate Athletic Association banned predetermined games and events (typically postseason play such as tournaments) from taking place in South Carolina because of the flying of the Confederate flag.

Elizabeth Davis, the president of Furman University, a private institution in the state, also called for the removal of the Confederate flag from the State House grounds.

Not all presidents in South Carolina are speaking out against the continued prominent position for the Confederate flag. Glenn McConnell is the new president of the College of Charleston. His appointment last year was controversial for many reasons, including his long support for Confederate symbols. He used to own a shop that sold memorabilia of the South’s rebellion, he appears in a widely circulated picture dressed as a Confederate general and he is a longtime supporter of flying the Confederate flag on the State House grounds.

Asked if McConnell was speaking out on the issue Monday, a spokesperson said via email: “President McConnell says it is not appropriate to talk about the issue until after the families had a chance to mourn their losses and hold funerals for their loved ones.”

Confederate flags are not the only symbols or honors that offend. While many universities have renamed buildings that honor racists of past eras, Clemson turned aside such requests this year and will preserve the name of Tillman Hall, named for Benjamin Ryan Tillman, a white supremacist politician who was among the institution’s founders. Faculty and student groups sought to change the name, noting that Tillman stands out for his brutality and racism, and noting that he regularly boasted of participating in the killings of black people. The university declined to make a change. 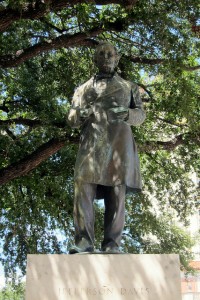 Students at the University of Texas at Austin are renewing calls to remove a statue of Jefferson Davis that stands on campus. Photo by Wally Gobetz/Flickr

At the University of Texas at Austin, student leaders are renewing a push to have the institution remove a statue (right) of Jefferson Davis. A petition states: “Statues serve to glorify and memorialize the values of what the subject stood for. Given Jefferson Davis’s vehement support for the institution of slavery and white supremacy, we believe this statue is not in line with the university’s core values — learning, discovery, freedom, leadership, individual opportunity and responsibility. It is impossible to reach the full potential of an inclusive and progressive learning institution while putting an idol of our darkest days on a pedestal.”

Gregory Fenves, president of the university, met with student leaders Monday to discuss the issue and said on Twitter: “I take this issue very seriously and am working with students and campus leadership on it.”

Left: The Confederate flag is one of 57 flags hanging in the Citadel's chapel. The Citadel is one of South Carolina's public universities. Photo by Russell K. Pace/The Citadel