TOPEKA, Kan. — As a girl in Kansas, Linda Brown’s father tried to enroll her in an all-white school in Topeka. He and several black families were turned away, sparking the Brown v. Board of Education case that challenged segregation in public schools.

A 1954 decision by the U.S. Supreme Court followed, striking down racial segregation in schools and cementing Linda Brown’s place in history as a central figure in the landmark case.

Funeral officials in Topeka said Brown died Sunday at age 75. A cause of death was not released. Arrangements were pending at Peaceful Rest Funeral Chapel.

Her sister, Cheryl Brown Henderson, founding president of The Brown Foundation, confirmed the death to The Topeka Capital-Journal. She declined comment from the family.

Sherrilyn Ifill, president and director-counsel at NAACP Legal Defense and Educational Fund Inc., said in a statement that Linda Brown is one of a band of heroic young people who, along with her family, courageously fought to end the ultimate symbol of white supremacy — racial segregation in public schools.

“She stands as an example of how ordinary schoolchildren took center stage in transforming this country. It was not easy for her or her family, but her sacrifice broke barriers and changed the meaning of equality in this country,” Ifill said in a statement.

“Sixty-four years ago, a young girl from Topeka, Kansas sparked a case that ended segregation in public schools in America.”

Several black families in Topeka were turned down when they tried to enroll their children in white schools near their homes. The lawsuit was joined with cases from Delaware, South Carolina, Virginia and the District of Columbia.

On May 17, 1954, the Supreme Court ruled unanimously that separating black and white children was unconstitutional because it denied black children the 14th Amendment’s guarantee of equal protection under the law. “In the field of public education, the doctrine of ‘separate but equal’ has no place,” Chief Justice Earl Warren wrote. “Separate educational facilities are inherently unequal.”

The Brown decision overturned the court’s Plessy v. Ferguson decision, which on May 18, 1896, established a “separate but equal” doctrine for blacks in public facilities.

“Sixty-four years ago, a young girl from Topeka, Kansas sparked a case that ended segregation in public schools in America,” Kansas Gov. Jeff Colyer said in a statement. “Linda Brown’s life reminds us that by standing up for our principles and serving our communities we can truly change the world. Linda’s legacy is a crucial part of the American story and continues to inspire the millions who have realized the American dream because of her.” 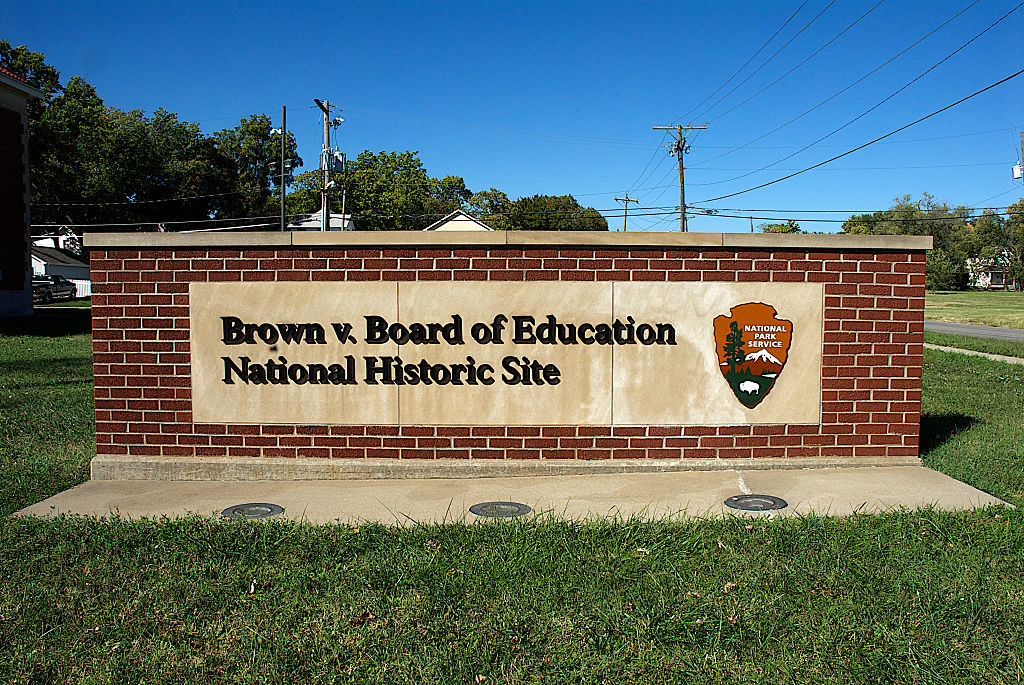 The Monroe School historic site of Brown v. Board of Education. Photo by Mark Reinstein/Corbis via Getty Images

Brown v. Board was a historic marker in the civil rights movement, likely the most high-profile case brought by Thurgood Marshall and the lawyers of the NAACP Legal Defense and Education Fund in their decade-plus campaign to chip away at the doctrine of “separate but equal.”

“Her legacy is not only here but nationwide,” Kansas Deputy Education Commissioner Dale Dennis said.

Oliver Brown, for whom the case was named, became a minister at a church in Springfield, Missouri. He died of a heart attack in 1961. Linda Brown and her sister founded in 1988 the Brown Foundation for Educational Equity, Excellence and Research.

The foundation says on its webpage that it was established as a living tribute to the attorneys, community organizers and plaintiffs in the landmark Supreme Court decision. Its mission is to build upon their work and keep the ideals of the decision relevant for future generations.

“We are to be grateful for the family that stood up for what is right,” said Democratic state Rep. Annie Kuether of Topeka. “That made a difference to the rest of the world.”

Left: Brown v. Board of Education was a landmark case in which the U.S. Supreme Court declared state laws establishing separate public schools for black and white students unconstitutional.