Millions of workers are jobless while in-demand jobs need workers. Can colleges train them?

As record numbers of Americans lose their jobs because of the coronavirus pandemic, Kathleen Perlmutter has been desperately trying to turn out enough graduates to fill a critical shortage of workers.

Perlmutter trains phlebotomists, the people who draw blood in hospitals and clinics, for which demand is surging and will increase by double-digit percentages over the next few years, according to the Bureau of Labor Statistics — with or without a recession.

“We are almost at crisis mode,” said Perlmutter, who directs the phlebotomy program at Pennsylvania’s Montgomery County Community College. “When somebody retires, we can’t replace them.”

“When somebody retires, we can’t replace them.”

Whatever happens to the economy, shortages will remain not just in phlebotomy, but in many other professions, and some may even get worse as a result of the pandemic; social distancing and changes in behavior following the massive shutdowns will likely increase the already strong demand for digital and social media marketers, for instance.

And while the pandemic’s financial toll could postpone the expected retirements of huge numbers of aging veterinarians and plumbers, those specialists will eventually step aside, with little letup in demand for the services they offer.

Colleges and universities are already being called upon to anticipate areas of growth and supply and to help Americans learn the skills they’ll need to weather the impending recession. 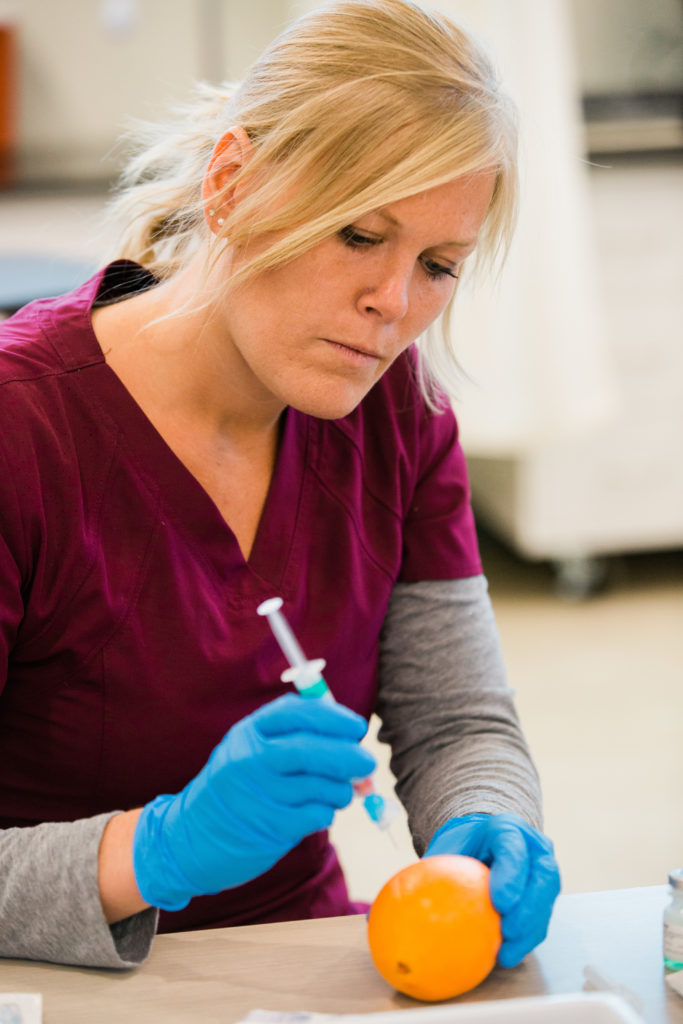 Demand for phlebotomists, the people who draw blood in hospitals and clinics, is expected to continue to increase. This nurse is training in a program in Montana. Photo by Kristine T. Paulsen for The Hechinger Report

But nimbly producing graduates with skills that are needed in the workplace is something employers have complained America doesn’t do very well.

Eighty-three percent of employers said last year they were having trouble finding suitable job candidates, according to a survey by the Society for Human Resource Management. More than a third noted a lack of skills among candidates, and more than half that the skills gap was wider than ever, despite years of conversations about how to narrow it.

It’s a finding that has come up consistently in earlier surveys of people who do hiring. Only 11 percent of business leaders in a Gallup poll said college graduates were effectively prepared for the workforce. Only 42 percent of employers considered graduating seniors to be proficient in “professionalism” and “work ethic,” the National Association of Colleges and Employers found.

Nearly two-thirds of Americans said the higher education system is doing only a fair or poor job of preparing graduates for the workforce, according to a survey conducted by FTI Consulting for Northeastern University; nearly 90 percent said that the U.S. higher education system needed to change for the nation to maintain a globally competitive workforce. And that was in 2013.

The United States invests less in critical workforce aid than nearly every other industrialized country, the Campaign to Invest in America’s Workforce noted in a recent letter to congressional leaders. The group has asked Congress to invest in training for workers displaced by the pandemic.

A solution will require more than money, however. Colleges and universities, which are trying to figure out their own futures, will need to be encouraged to shift their focus to job training in some cases, and displaced workers will need to be persuaded to rethink their careers.

That’s left the planning for changes to education and retraining programs as fragmented and chaotic as the response to the pandemic itself.

Some educators’ early attempts to reach laid-off workers have been stymied, said Kris Williams, chancellor of Kentucky’s community college and technical college system, which has been trying to do that.

Displaced workers will need to be persuaded to rethink their careers.

“Many of them right now are more focused on unemployment benefits and child care,” she said. “Retraining may not be the first thing on their minds.”

There are also bureaucratic and practical barriers to solutions such as certificate programs, in which students can quickly learn critical skills in fields ranging from health care to factory work, but for which they usually can’t use federal financial aid.

Congress spends three times more on the Pell Grant program to help undergraduates get degrees than it does on the nation’s principal workforce development program, the Workforce Innovation and Opportunity Act, noted Jason Tyszko, vice president of the Center for Education and Workforce at the U.S. Chamber of Commerce Foundation.

Meaningful coordination among employers, educators and policymakers has been scant. The federal government updates its employment projections only once a year.

“The problem is there isn’t much by way of infrastructure to bridge supply and demand,” said Tyszko. “We don’t have a workforce system in this country. We never have.”

In the past, in the absence of a national system, many higher education institutions set up employer advisory boards that had “very little influence,” Tyszko said.

“It was tough to get a seat in the room to talk to higher ed, because there was this sense of, the business community doesn’t belong here. It’s a threat. You’d think I was the devil in the room. It was like the barbarians at the gates,” he said.

“Now it’s, like, no, folks are clamoring to get us in the room. We’re seen as an opportunity, not a threat.”

That’s because universities and colleges that have spent decades focusing on bachelor’s degrees have a new incentive to work with employers: They desperately need the revenue that comes from offering shorter-term programs to boost the employability of people who have been laid off, said Matt Sigelman, CEO of the labor analytics company Burning Glass Technologies.

With a devastating recession looming, compounded by state funding cuts and declining endowment returns, these institutions are expecting big drops in their numbers of tuition-paying conventional undergraduates.

“There are a lot of colleges that need to reposition right now,” Sigelman said. “You need to be able to bring in a new group of learners.” 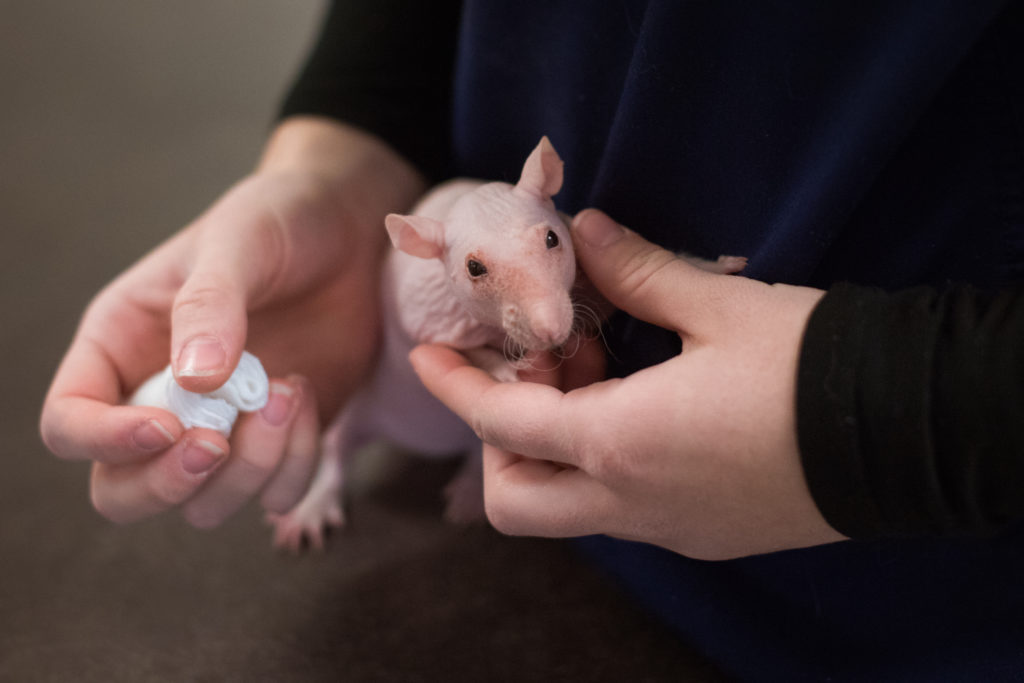 With huge numbers of veterinarians nearing retirement, the need to train new ones in programs like this one in Massachusetts is expected to grow — with or without a recession. Photo by Gretchen Ertl for The Hechinger Report

About half of postsecondary students are already enrolled in the certificate or associate degree programs, mostly at community colleges, that supply many industries with workers.

Certificates, professional certifications and other nondegree programs may now offer the easiest ways for other universities and colleges to quickly fill seats, too, Sigelman said — while also helping people get new jobs.

“Do you use this moment to say, ‘We’d better hunker down and burn the floorboards to save the buildings,’ or do you say, ‘There’s a silver lining to this very dark cloud’?” Sigelman asked.

There are proposals for big federal investments in community colleges to help the nation recover, and for reforms to allow students in short-term programs in high-demand fields to use federal financial aid. A bill in Congress would provide another $15 billion for the public workforce system, including for education and training. Some companies are trying to help connect businesses with schools and other organizations to train laid-off workers for new jobs.

One of those companies was created by the education incubator Entangled Group, whose head of strategy, Michael Horn, said community colleges in particular are well-suited to help their local workers and businesses.

“If they can position themselves as part of the severance package, that’s something community colleges should be doing,” Horn said. “They should be consciously putting forth programs that match up with the local community.”

Among the fields Sigelman expects to weather the recession best are cybersecurity, data analysis, project management and professions requiring regulatory knowledge. And more than half of the nation’s skilled tradespeople are over age 45, meaning lots of looming retirements in fields such as plumbing that require at least some postsecondary education.

On the other hand, some shortages predicted before the pandemic are now less likely to materialize, including for airline pilots and event promoters.

Of course, for many of the most practical vocational programs, in-person instruction is essential, which means those college departments won’t be able to train new workers until campuses reopen. In the meantime, students can’t graduate or take certification exams.

For many of the most practical vocational programs, college departments won’t be able to train new workers until campuses reopen.

“You can’t learn how to do this online, I don’t care what anybody says,” said Perlmutter, the phlebotomy director at Montgomery County Community College. “You need to know what it would feel like to put a needle into a person.”

As a result, she said, “All of our students are in a holding pattern. That means they can’t get jobs. It’s terrible.”

The organization that accredits phlebotomy and several other health care programs, the National Accrediting Agency for Clinical Laboratory Sciences, has told college departments it will not allow them to scale back requirements, Perlmutter said.

“Which is the right decision,” she said. “Do you really want somebody drawing your blood who has only done it four or five times on a fellow student?”

In Kentucky, community colleges are searching for new ways to ensure job training doesn’t fall too far behind during the shutdown. The college system plans to assess its future after July 1, said Williams, the state chancellor.

“It’s frustrating when we can’t help people to the extent that we want to.”

This story about job training was produced by The Hechinger Report, a nonprofit, independent news organization focused on inequality and innovation in education. Sign up for our higher education newsletter.

Left: Changes in behavior following the pandemic shutdowns, and a continued need for social distancing, will likely increase already strong demand for digital and social media marketers and other tech professionals trained in programs such this one in Georgia. Photo by Terrell Clark for The Hechinger Report

Will college campuses reopen in the fall? Cal State’s chancellor weighs in