In an unprecedented, broad-based survey, the Massachusetts Institute of Technology polled students about their attitudes and experiences with sexual assault on campus. One in six female undergraduate students who responded to the survey say they’ve experienced sexual assault on the Cambridge, Mass. campus, although fewer than 5 percent reported the experience to authorities or to the school.

MIT released its comprehensive survey results yesterday. The poll is the first of its kind for the MIT community, and it goes beyond the scope of similar studies at other colleges and universities. Nearly 11,000 undergraduate and graduate students were surveyed last spring, and 35 percent responded.

Many students who reported experiencing unwanted sexual advances did not consider it assault. Courtesy of MIT.

Students answered questions about their attitudes and views on sexual assault, their experience with sexual misconduct, and their thoughts on bystander intervention.

Listen to the reporting that aired on WGBH radio and an extended interview with Chancellor Barnhart here.

“What we find from the survey is that we need more education in our community, and that’s exactly what we’re positioning ourselves to do,” said Barnhart.

One of the most striking findings, Barnhart points out, is that there’s genuine confusion among students about what actually constitutes sexual assault.

While virtually all survey respondents agreed that it’s important to get consent before sex, more than half said “rape and sexual assault can happen unintentionally, especially if alcohol is involved.” 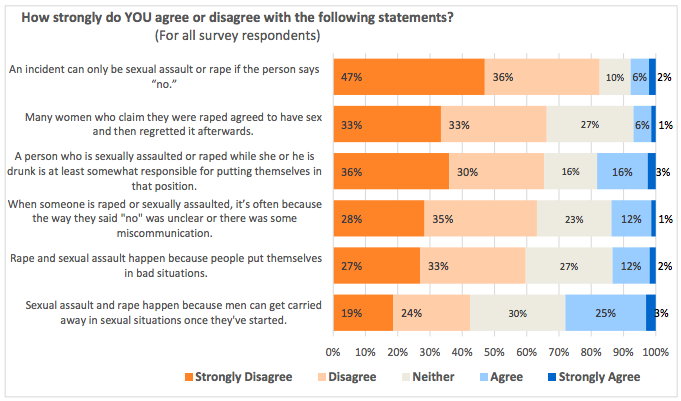 More than a quarter of respondents agreed rape and sexual assault are caused by men getting carried away in sexual situations. Courtesy of MIT.

MIT will be increasing staff who respond to reported sexual assaults and has launched a Sexual Assault Education and Prevention Task Force.

The results of MIT’s survey provide context to the national conversation on sexual assault on college campuses.

In the spring, the White House called on all U.S. colleges and universities to survey their students. Several schools, including Harvard and MIT, have hired sexual assault investigators. And many schools have seen a dramatic increase in the number of reported sexual assaults on campus.

This story comes from On Campus, a public radio reporting initiative focused on higher education produced in Boston at WGBH.