Obama Pushes Overhaul of No Child Left Behind Law, but Testing Will Remain Central 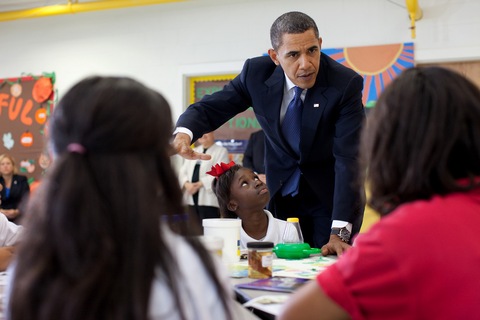 When it comes to his domestic agenda, President Obama frequently gets criticism from conservatives for what they see as overreaching on issues that he didn’t define during his campaign. At the same time, he’s often criticized from the left for what it sees as a betrayal of campaign promises and far short of the transformational “change” that help propel him to the White House.

But on at least one of the major domestic issues he campaigned on — education — there’s general consensus that Mr. Obama has been plowing ahead as advertised, even if both sides don’t agree with him. In a speech Monday morning at Kenmore Middle School in Arlington, Va., he’ll ramp up his campaign to get Congress to make substantial changes to the federal education law known as No Child Left Behind (NCLB).

During the campaign, the president said that NCLB (one of President George W. Bush’s signature accomplishments) had laudable goals but needed major revisions. In his speech Monday, and in his proposal to Congress, he’ll continue to hit that theme, arguing that NCLB’s focus on testing for reading and math between the third and eighth grades and once in high school — as well as its standards for what’s known as “adequate yearly progress” by schools — simply doesn’t work for many schools.

Under NCLB, schools face a variety of penalties if they continue to fail. Principals and teachers could be fired if schools repeatedly failed.

In its stead, President Obama will still call for testing as an essential way of measuring the performance of schools, teachers and students.

But he wants more flexibility and a broader metric for evaluating schools that will put greater emphasis on graduation rates. His proposal also asks to evaluate how students do academically over time on a variety of subjects beyond just math and science. And he’s calling for a broader assessment of how a school is performing over a period of time, rather than using the blunt judgment of providing it a “passing or failing” grade as is the case now under NCLB. (Neither the administration nor Congress has any intent of continuing to call the law NCLB once it’s reauthorized and revised.)

“We need to make sure we’re graduating students who are ready for college and a career,” Mr. Obama said in prepared remarks released ahead of the speech. “We need to help every child get ahead. We need to get every child on a path to academic excellence.”

The president’s appearance comes just days after Education Secretary Arne Duncan told Congress that perhaps as many as 80 percent of the nation’s 100,000 public schools are expected to fail to meet the NCLB standards later this year — an estimate that some observers thought was widely inflated to help make the case against NCLB.

“The law is far too punitive,” Duncan told reporters Sunday in a conference call previewing the president’s remarks. “There are dozens of ways to fail. It’s led to a dumbing down of curriculum. We have to get away from this sense of a narrow curriculum.”

For its part, the Obama administration has become well-known for its belief in testing and talking tough to teachers about performance evaluation.

At one point, the president went so far as to even back up Rhode Island authorities for trying to fire the entire teaching staff of a high school when teachers rejected a turnaround plan that would have forced them to work longer hours without more pay. Earlier this month, he appeared at a joint education event with former Florida Gov. Jeb Bush, angering teachers and raising eyebrows among a few Democrats.

While Obama’s proposals are getting good reviews among some education wonks, others say they are frustrated that the president’s post-NCLB law will still put far too much emphasis on testing, not necessarily learning.

“We are disappointed that they continue on testing all children in Grades 3 through 8. No other countries have so much testing,” Monty Neill, the executive director of the National Center for Fair and Open Testing (FairTest) in Boston, told the Christian Science Monitor.

Melody Barnes, the director of the White House Domestic Policy Council, told reporters Sunday that she hopes to get Congress to revise the law before the start of the coming school year, noting that the President has met with leaders from both parties. But several leading Republicans on key committees have said they are concerned about the role of the federal government in education in light of NCLB.