CLINTON, Okla. — One of the biggest employers in this hardscrabble working class town in western Oklahoma is the Bar-S Foods Company meat packing plant, where many of the city’s 9,500 residents work. Clinton also boasts a Route 66 Museum, a somewhat epic indoor waterpark, and free universal preschool for every 4-year-old in town.

Ninety-one percent of the town’s 170 4-year-olds enroll in a public program annually, said Tyler Bridges, the assistant school superintendent. About 140 attend the state-supported district preschool while another 15 or so attend the local Cheyenne-Arapahoe Head Start program.

Those high numbers are impressive especially since only 53.7 percent of 3- and 4-year-olds are in school nationally and the U.S. ranks 30th for preschool enrollment among OECD nations, a common proxy for nations with advanced economies. That’s despite decades of research showing that early education improves students’ chances of succeeding in school.

“[Prekindergarten] has been around long enough now, I don’t think anyone thinks about it.” Tyler Bridges, Assistant Superintendent in Clinton, Oklahoma.
But in Clinton, some things are just taken for granted: movie-worthy sunsets, churches on nearly every corner, and sending kids to preschool when they turn 4.

“It’s been around long enough now, I don’t think anyone thinks about it,” said Bridges of the town’s preschool program.

The same might be said of the state as a whole. Since 1998, Oklahoma has had fully funded preschool for every child, regardless of family income. As long as a child is 4 by Sept. 1, he or she is qualified to attend school for a year prior to entering kindergarten. Seventy-six percent of the state’s 4-year-olds were enrolled in 2014, a total of 40,823 children and one of the country’s highest enrollment percentages, according to the latest annual State of Preschool report by the National Institute for Early Education Research.

“I think it is popular because it is funded,” said Oklahoma State Superintendent Joy Hofmeister. “As more attend, you can have a more enriched opportunity for everyone.”

Related: Should college tuition be free or paid on a sliding scale? Just ask preschool advocates

Public preschool is high on the Democratic agenda right now. In 2013 President Barack Obama called for $10 billion in federal funding to help states start new programs, primarily for children from low-income families — a call he has repeated every year since. Likely Democratic nominee Hillary Clinton has also made early education — an issue she’s championed for 40 years — a priority in her campaign.

76 percent of Oklahoma 4-year-olds are enrolled in the state’s universal prekindergarten program.
But offering preschool to all kids might seem to be an even more radical move. Oklahoma is one of just four states (the others are Florida, Vermont and West Virginia) along with the District of Columbia that offer universal preschool access to all age-eligible children regardless of family income. Oklahoma’s program was the first of the group and enrolls more students than Vermont or West Virginia. Florida’s program enrolls nearly four times as many kids, but its quality standards are far lower. 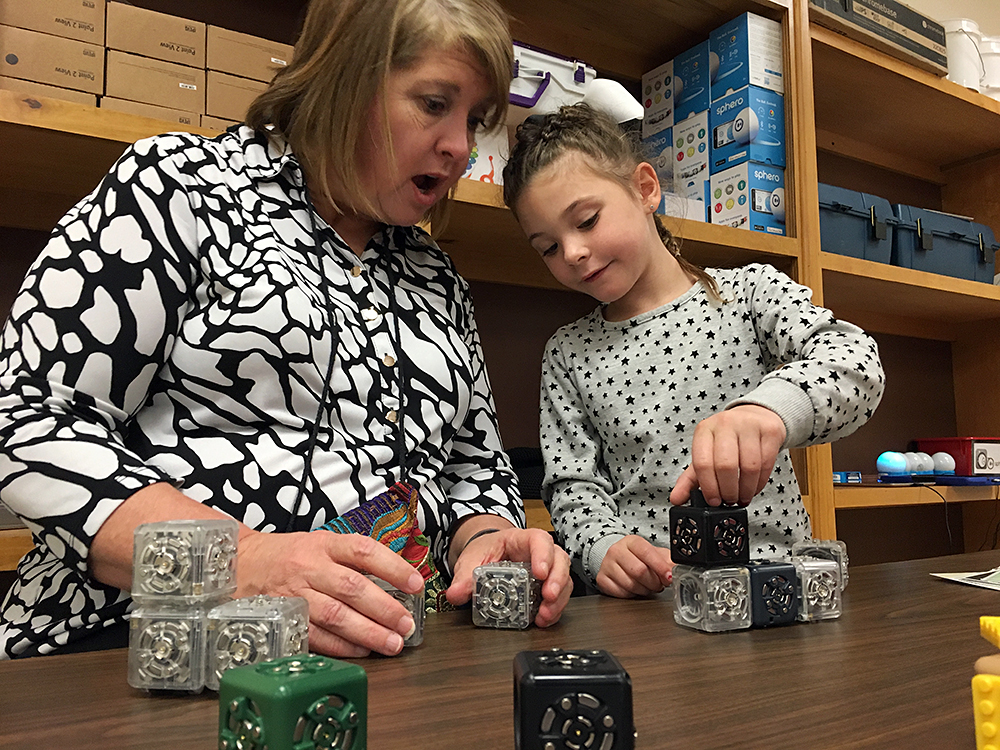 Principal Janalyn Taylor exclaims as Layla Lee, 5, shows her how she’s made a moving robot out of “cubelets” in the maker space at Nance Elementary in Clinton, Oklahoma. Photo: Lillian Mongeau

A few other states, like Wisconsin and Georgia, come close to offering universal programs, but most states are light years behind the leaders. Even Massachusetts, generally seen as a leader in education, only serves 14 percent of its 4-year-olds in state preschool.

Related: Want a free year of preschool in California? Have a fall birthday

While the discussion of a federal expansion of early education funding has become mired in partisan politics, free universal preschool is widely accepted here. “We’re certainly not battling this at the legislature,” Hofmeister said. “That is not a conversation that I hear.”

Steven Barnett, director of the National Institute for Early Education Research, called Oklahoma a role model for the many other states currently considering expanding their public programs.

“Oklahoma provides universal preschool as part of the public education system,” Barnett said. “So that means bringing all of the quality standards, all of the focus on learning and teaching, to the preschool program. And most states don’t do that.”

On a fall afternoon in Clinton, it was easy to see how preschool students benefitted from having the power of the K-12 system behind them. At Nance Elementary School, the town’s center for all of its prekindergarten through first grade students, Anita Smith’s pre-K students had scattered around a basement “maker space” stocked with high-tech toys. The room, meant to inspire interest in science and technology, was paid for with a district-wide grant from the Oklahoma Educational Technology Trust.

At one table, Matthew Hernandez, 5, played with LEGO-like toys that contained tiny electronic circuits. When he clicked them together properly, they made a light flash. Across the room, Lexa Panana, 5, zoomed a remote control robot around the floor in front of the whiteboard while Layla Lee, also 5, put together blocks called “cubelets,” to build her own robot. Asked what she was doing, Layla barely looked up to explain the obvious: “I’m playing,” she said.

“I’m not sure [public prekindergarten] is a liberal or conservative issue. It’s about people wanting to do the best thing for kids.” Malinda Lindsay, principal at Muskogee Early Childhood Center in Oklahoma.

Critics of prekindergarten programs attached to K-12 schools have worried that such programs could become too focused on building academic skills in age-inappropriate ways. Oklahoma’s program attempts to address that by requiring lead teachers to have bachelor’s degrees in education with a specialization in prekindergarten and a 10:1 student to adult ratio in every classroom. It also has high early learning standards, Barnett said. 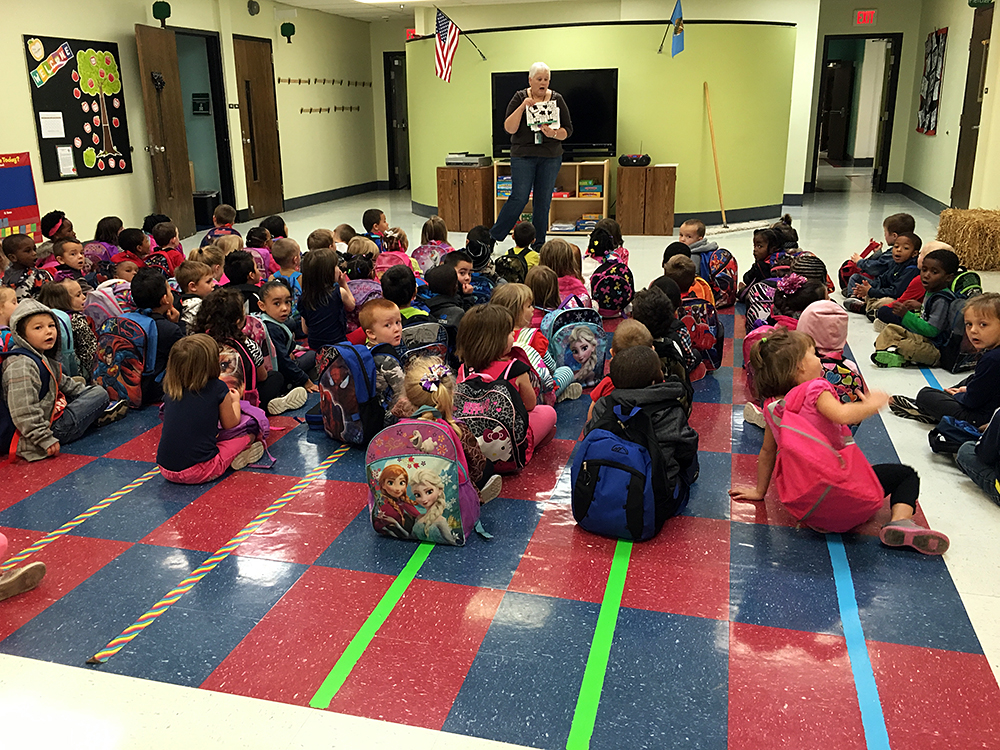 Janice Scott, a teaching assistant at the Early Childhood Center in Muskogee, Oklahoma, leads a morning session with many of the center’s students while their teachers prep art and science lessons. Photo: Lillian Mongeau

Many Oklahomans say a major reason preschool works here is because, as long as quality standards are met, towns and districts are able to create programs that fit their needs.

Local control is important in Muskogee, 222 miles east of Clinton, a small town near the Arkansas River that looks more Old South than Wild West. At Muskogee’s Early Childhood Center, Principal Malinda Lindsey leads 15 prekindergarten classrooms serving 285 children, the vast majority of whom qualify for free or reduced-price lunch, a federal indicator of poverty. She takes the idea of local control all the way to the classroom, allowing teachers to design classroom environments that work for them even if that means things look vastly different from room to room.

“We’re not certainly battling this at the legislature — that is not a conversation that I hear.” Oklahoma State Superintendent Joy Hofmeister

In Nerissa Whitaker’s classroom a boy named Kash McDaniel, 4, practiced writing his name at a well-stocked writing and art station. Down the hall, in Elizabeth Salas’ classroom, Dante Larson, 5, served coffee and bacon from a play stove to Natalie Hernandez, also 5, who snuggled a baby doll while chatting on a play cell phone. In yet another classroom, this one lit softly and featuring nature-oriented toys and decorations, Grace Marder, age 4, tried to find the right words to describe the leaf she’d found during an earlier nature walk with her class. The leaf was now glued to a piece of white printer paper. 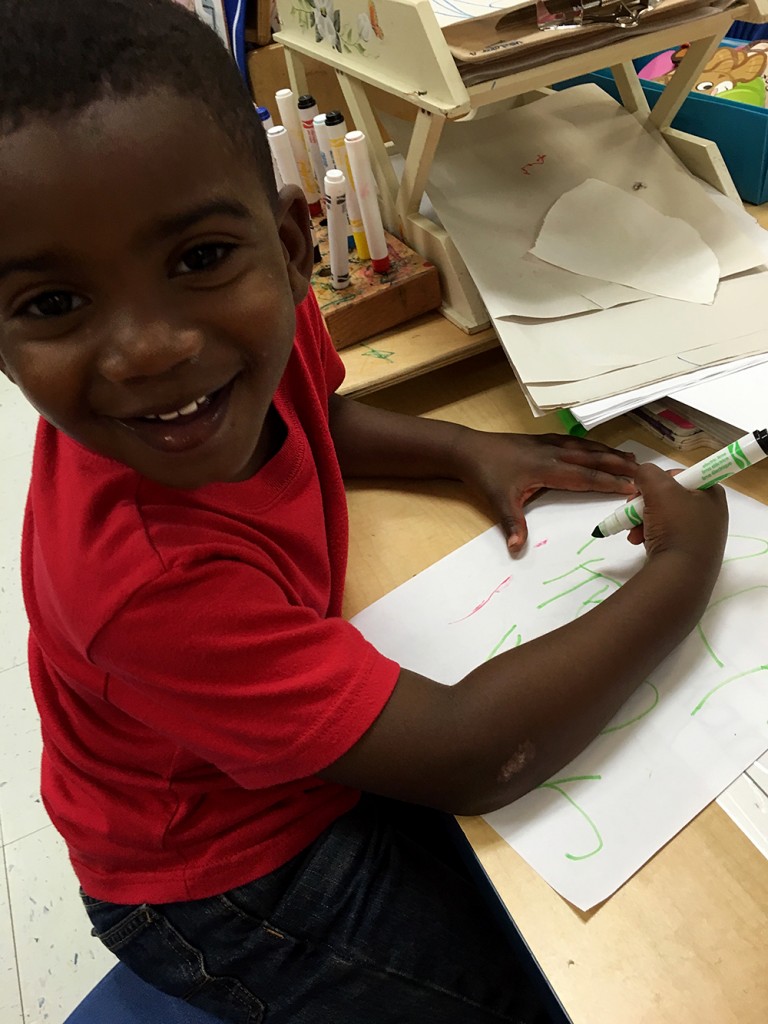 “It’s red,” she confidently told her teacher, Jana Dunlap. But then she struggled to find another adjective. Dunlap prompted her with a list of possibilities: smooth, bumpy, rough? “Bumpy,” Grace said finally and watched as Dunlap carefully wrote, “It’s red and bumpy,” below the leaf.

With so many struggling to make ends meet, most of her students’ families could not afford private preschool, Lindsey explained.

“For children like these, the opportunity to get a free public education offers them a strong start that is vital to success later on,” she said. 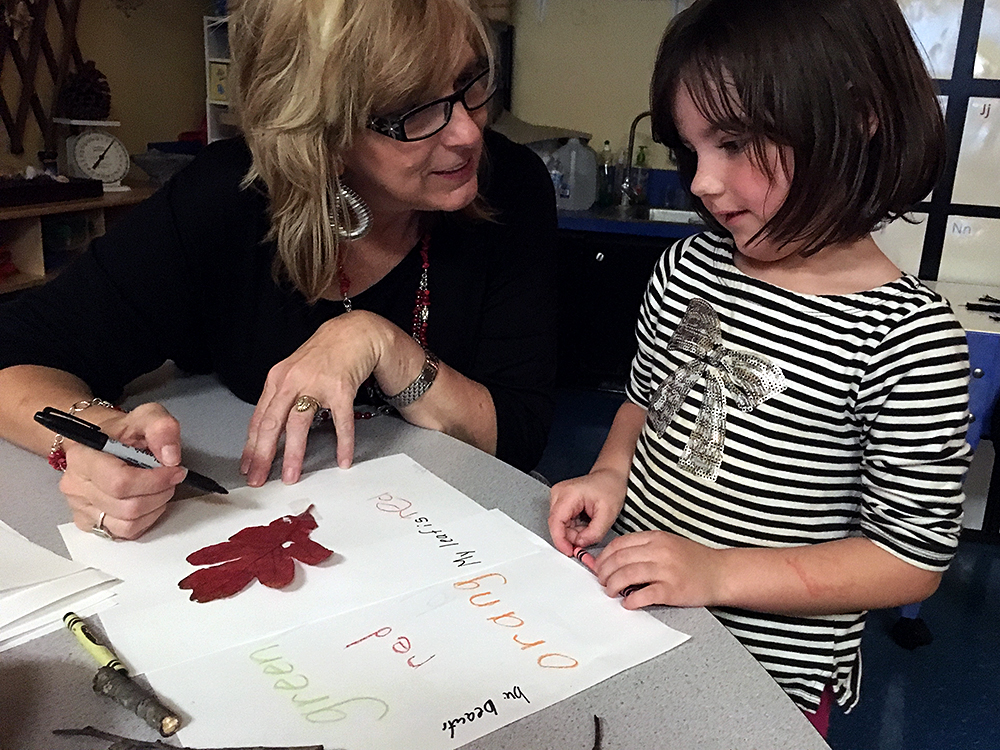 Teacher Jana Dunlap works with Grace Marder, 4, to come up with adjectives to describe a leaf the child found on a nature walk outside the Early Childhood Center in Muskogee, Oklahoma. Photo: Lillian Mongeau

That’s a sentiment expressed by many liberals — but Lindsey said it’s also in line with the traditional conservative values of protecting children and helping families. In the end, Lindsay said, support for preschool should transcend politics.

“I’m not sure it’s a liberal or conservative issue,” she said. “It’s about people wanting to do the best thing for kids.”

This story was written by The Hechinger Report, a nonprofit, independent news organization focused on inequality and innovation in education. Read more about early education.